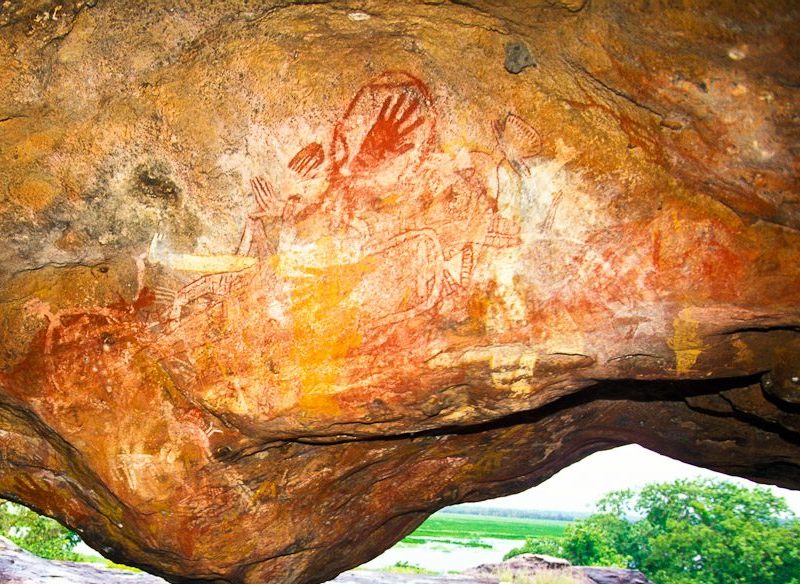 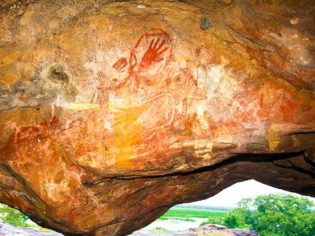 Australia is lucky to have some of the oldest art galleries in the world scattered across the continent. Whether in Arnhem Land (left), Kakadu, Cape York, the Pilbara or Central Australia – usually at the end of a walking track – work from artists that has survived for many tens of thousands of years is available for viewing.

The largest and most varied (by style) concentration of rock art in the world is thought to be on the central western coast of WA on the Burrup Peninsula, near the industrial town of Dampier. The “gallery” is estimated to number about 300,000 images across approximately 2000 sites.

“To explore a rock art site and casually stroll past a scene that was painted tens of thousands of years ago . . . it beggars belief. And instils a powerful sense of the imagination and creativity of those that came before.”
– Greg Barton

Most of it is believed to be 6000 to 8000 years old, with the oldest examples estimated at 10,000 years (twice the age of the pyramids in Egypt). Another well-known and admired location is Cave Hill Aboriginal Community in Central Australia.

Did you know?
Current belief is that the oldest rock paintings (petroglyphs) in the world are carbon dated at 30,000 years old and located at La grotte Chauvet in France. The Bradshaw Foundation of Australia, however, say that the pigments in the Bradshaw Paintings in WA’s Kimberley region are so old they’ve become part of the rock itself, making carbon dating impossible. They could be 50,000 years old, which would make them the oldest known rock paintings on the planet.

How to get there
For Kakadu National Park see Overload your senses.

For the Kimberleys see Cruise the rugged Kimberley coast.

For Cape York see Time’s nearly up at the Top.

Best time to go
May to October

http://www.environment.gov.au/topics/national-parks/kakadu-national-park/culture-and-history/rock-art
Department of the Environment and Heritage website with info on aboriginal rock art at Ubirr, Nourlangie and Nanguluwur in Kakadu National Park, NT