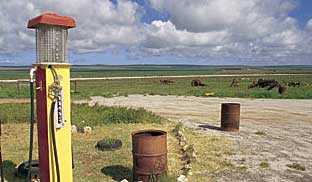 Across the Nullarbor, No 4 of Australia’s Greatest Drives.

Tell anyone you’re driving almost 2,000km across the Nullarbor and you’ll get one of two reactions. The first is usually a mixture of bewilderment, pity and horror: “It’s so long and boring – why don’t you fly, or at least catch the train? It’ll take days and there’s nothing to see.” Others look at you enviously: “Wow, I’ve always wanted to do that!” The Nullarbor’s like that. There’s no denying it’s a long trip – four days, maybe more: it covers an area equivalent to England, Belgium, the Netherlands and Switzerland, with 7000km2 left over. And it’s definitely flat, with long sections of empty straight between tiny settlements where shopping, nightlife and good coffee is non-existent. But once you’ve done the trip you could never argue that it’s boring, nor could you say there’s nothing to see. As far as great Aussie road trips go, this one can’t be beaten.

Total distance:Perth to Ceduna, around 2000km

Best kept secret
The Yalata Roadhouse, the best on the Nullarbor, also has an Aboriginal art gallery where paintings, carvings and other work by local artists are sold at a fraction of the price of city galleries.

Break fluid
Ceduna Oyster Bar: snack on freshly shucked oysters and wine under an umbrella on the roof of the oyster shed overlooking the bay.