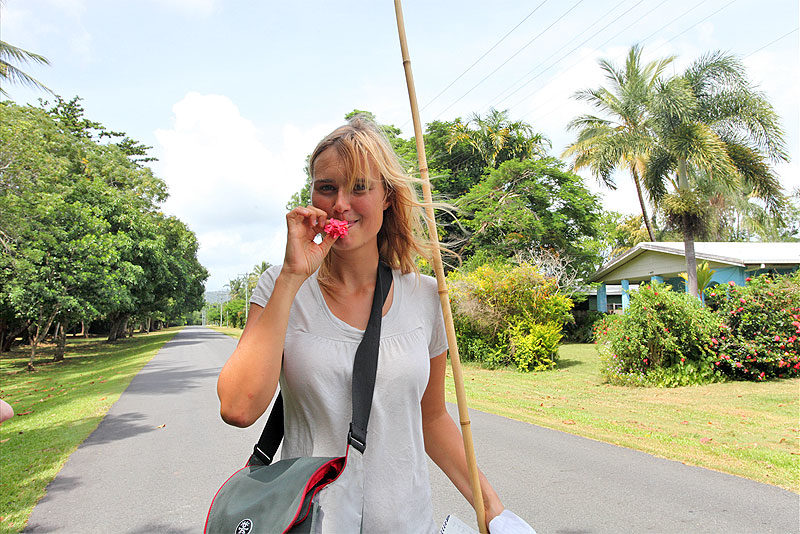 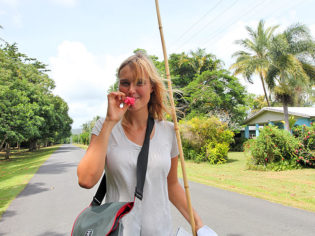 No, I haven’t found a new flower with wonderful medicinal (and mind altering) properties. Instead, I indulged my sweet tooth in a rather traditional way in Queensland. My lucky encounters with indigenous tour operators not only gave me something to suck on for my sweet tooth, they also filled my head with mind altering thoughts (I really do hope it had nothing to do with too many flowers and green ants). And as the saying goes: the best things in life are free – and not just the flowers.

No matter which way you look at it, travelling really is about sharing moments with people. There might be writers out there who tell you differently, saying it is about the planning, the location or maybe your state of mind. And, of course, it’s a good idea to at least tell your boss you’re going away. But it doesn’t matter where you go or what you do, people (and chance encounters) are what makes travelling worthwhile. And sharing your stories with friends and family when you get home, of course. Even if you have to tell tall tales, because you spent your tropical island escape holed up in your hotel room watching reruns of The Simpsons and cursing me for telling you planning didn’t matter. (I would try to avoid the wet season, if you’re unprepared.)

This month, the open friendliness of people in small places, like Cooktown and Narooma, and lucky encounters I had along the way left a deep impression. When Willy, an aboriginal elder (EDS NOTE, unfortunately Willie retired in 2017), took me to a traditional birthing site, sharing his people’s history and beliefs, I felt profoundly moved. Seeing the quick-witted lovable character reach out to one of my fellow travellers, a girl with indigenous heritage who had come on a journey of spirit, made me reassess my own connection with family and friends.

That night I lay wide awake in my hotel room in Cairns, wondering about what made us who we are. Willy’s people believe in a deep connection with the land and their forefathers. When a baby is born in the cave ordained with rock paintings, they bury the mother’s placenta under a tree on their land. This is how they identify themselves. They belong to the land, just like the tree, and their roots go deep. Take their roots away and they would have trouble identifying themselves.

My lack of buried placenta (and Australian birthright) caused Willy some trouble. He even seemed a little worried at my missing roots. For a little time after my trip to Queensland I kept wondering what I could do to “be allowed” to call Australia home. Planting a tree seemed a valid option. Butr really, travelling might just be the answer. A short trip in our own backyard can do wonders. It may even help us find who we really are and where we belong. You don’t always have to venture far to find new horizons. Tamworth will do. Or maybe Byron.

On a high note

Lucky, our gregarious PM Kevin is lending us a helping hand. If you believe press releases, the stimulus package has indeed stimulated something. Apparently, one hotel group got more than 1000 bookings shortly after the cash infusion to Aussie wallets. I doubt it had anything to do with the No Leave No Life marketing campaign. I, for one, was too busy living to check out how the goverment would like me to spend my travelling money.

Spin doctors also tell me life and visitors are returning to rural Victoria. Occupancy numbers which had dropped from 80% to a devastating 10% are apparently back up to 76% at at least one local hotel. Let’s hope they got it right this time, and travellers will recognise the need to keep supporting those areas both financially and psychologically.

Staring at my computer screen after one too many crashes, I could do with some psychological help myself. My relaxing trip up the coast last week seems a lifetime away. Byron may be known for its mind altering substances but I experienced utter bliss without even so much as a flower to suck on. The treatment was utter bliss like I had never experienced before. Admittedly, my treatment at the Byron at Byron (www.thebyronatbyron.com.au was preceded by inhaling the spa’s “signature scent” – which may explain my sudden urge to propose to my massage therapist. Even though Liz is admittedly very pretty, nice and has an incredibly soothing voice, there must have been mind altering substances at work to make me want to marry a second time. (Of course, marrying a complete stranger might be a more sensible choice than following the white rabbit down the aisle while you’ve got your rose-tinted glasses on.) If you’d like to read more about The Byron’s Heavenly Features, check out my article.

I cleared my head the next day when I ventured underwater for the Byron Bay Underwater Photography Festival (www.underwaterfestival.com.au) and discovered a whole different world. Glad that I wasn’t diving with any exes or other malevolent people, when someone climbed on top of me as I was trying to go down slowly. (If you go too fast, your ears hurt like hell, trust me.) Sharks were the least of my worries, when another of the ten people jostling for a space on the rope almost kicked off my mask with his flippers. Once I was at the bottom of the ocean, I’d left all fears behind. If you’ve never dived before, take it from me: it’s, again, mind altering and a must do before you die. Read more in Out & About or check out amazing underwater videos and photos at www.2008.underwaterfestival.org.

We also have a special offer on underwater cameras for our readers. Email tim@underwater.com.au for a massive $170 off the entry level Sealife Reefmaster Mini. Retails at $545. You do the maths… 🙂

On the other side of the country, there’s another absolute must do for any serious Australian traveller, Ningaloo. In one word: whale sharks. Also, the new luxurious Sal Salis (www.salsalis.com.au) is a top spot.

Another new hotel I wouldn’t mind staying at this month is Melbourne’s new Hilton South Wharf (www.newmelbourne.com.au). It’s rare that the international hotel brand gets it wrong, and its placement in the thriving district should prove lucrative for hoteliers. Go, if for no other reason than to check out its Catalan inspired cuisine – you simply cannot go past crema catalana for dessert in my opinion – and tell me what you thought: swalkling@australiantraveller.com

All filled up and refuelled

This month’s foodie corner by resident gourmet Sarah Tierney brings you bite-sized info on the hottest new restaurants and spicy food festivals. Check it out in our Out & About section. While I’m on the subject, I’d also highly recommend a trip down to the Margaret River Chocolate Factory (www.chocolatefactory.com.au). They’ve doubled the production facility’s size, offering more than a whopping 100 different choccies. Enough to put anyone with a sweet tooth into a sugar-induced coma. What’s more, throughout May, there’ll be giveaways and special events. Oh, how I wish I lived in WA!

Another guilty pleasure of mine are museum stores. Somehow, spending an hour or more surrounded by art and artefacts inspires me to shop until the store closes. (As evidenced on a recent trip to Canberra.) Luckily, the latest museum store to open is on the Gold Coast. Check out the Metropolitan Museum of Art’s new outlet at Marina Mirage (www.marinamirage.com.au) and tell me if it’s worth a trip. I might get an overdraft or maybe ask for a pay rise.

If you prefer the exhibitions from the shops, head to the National Gallery of Australia’s Soft Sculpture exhibition in Canberra (http://nga.gov.au). (Just avoid the store at the end of the exhibition, as this is where my credit card met misfortune.) Apparently the works droop, ooze or splash. They are fluffy, squishy or bent. Whatever that means.

And lastly, in the War of the Airways, fares are dropping faster than you can say the words “global economy in meltdown”. (And try saying that thirty times over really fast.) In the last month, prices have dropped by an astonishing 30% in many cases. It’s good news for those with enough time and money on their hands. Okay, so with recent problems, Qantas “the airline with the best crash track record” might have become much less likely to get you there in one piece but with a choice of another three airlines, Emirates, Singapore and Malaysia to pick from, you can make significant savings.

P.S.: Wet bottom anyone? If you’re a skiing virgin like me, now is the time to pack your bags and head to the snow. Apparently, Falls Creek is the word. More than a month before the official start of the skiing season – in what media hailed as one of the most prolonged cold snaps in April – the resort has been hit with tons of powder and transformed into a winter wonderland. So far, I only got as close to the snow as the Falls Creek media shindig at Ruby Rabbit’s De Nom Lounge (www.rubyrabbit.com.au) where the talking point amongst assembled hacks was the bathroom. (I was greeted by “have you checked out the toilet yet?) A quick visit to investigate led me past an antiquated bookcase – like out of a Harry Potter movie, remarked my companion – and into a maze of mirrors. Since it was the men’s room, I quickly retreated, blinded by a myriad of reflecting surfaces and baffled at the need for so much navel gazing in a men’s room. Following my white rabbit to a bathroom to the left instead, I entered an ante-chamber complete with antiquated chair turned toilet and basin hidden behind lifting painting. If you are in Sydney and can get into the VIP area, this bathroom is a must to check out – just make sure you don’t drink too much or you might find yourself tumbling down the rabbit hole instead.

For information on Falls Creek and its latest five star resort the Quay West (opens on June 5) head to www.fallscreek.com.au

And for skiing holidays in NSW check out this new website which covers all of the state’s snow resorts: www.snownsw.com