Make It So: Inventions and Ideas by YOU 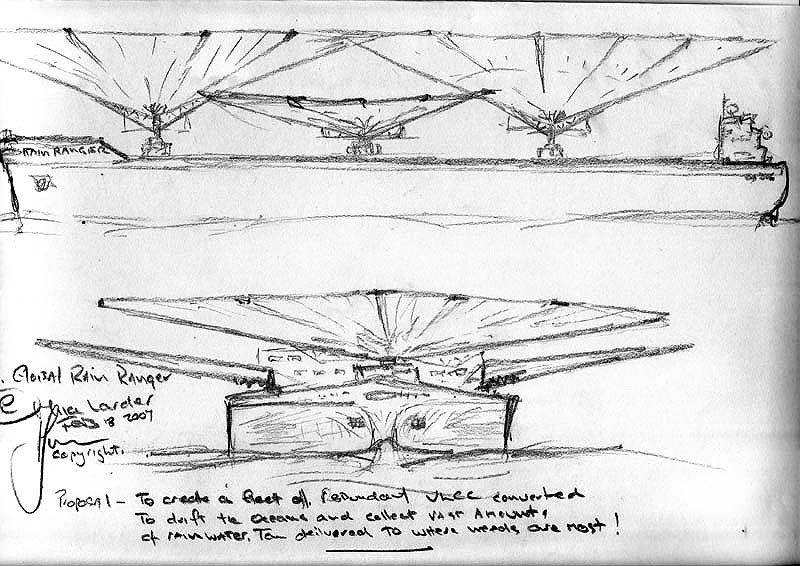 Engineers Australia launched a massive campaign on Feb 16, a kind of call to arms for Australians of any age to submit any idea, big or small, to be “Made So”.
This could be literally anything you’ve been stewing over – whether it’s “Make it so I can travel anywhere in the world in two hours”, or “Make it so I can pack my clothes without making any creases” or – as in the two examples pictured above – “Make it so our precious Great Barrier Reef Doesn’t Disappear” and “Make it so the water from my sink goes down the drain and into my veggie patch.”

The campaign is in the form of a massive inspiration-based competition, which will run for 12 weeks from Feb 16 – at which time, the final winner will have their idea “Made So” by a team of dedicated engineers.

So, put simply, I guess his entry would be “Make it so that rainwater can be more effectively collected at sea and put to use on land” . . . and he was even good enough to sketch out a diagram.

Aside from being a brilliant bit of marketing, I think this is a fantastic, simple and effective idea. And I for one would like to see as many AT readers as possible put their dreaming hats on and submit an idea to be Made So by Engineers Australia.

The competition will run until May, and a finalist will be selected each week until then, based on popularity, with the final winner being announced in August 2010.

AT’s long-time and very talented contributor Mike Larder, who lives in Yamba and helped us to put his small NSW town on the map with our 100 Best Towns feature last year, has already submitted to me his idea on what he would like Made So, and I reckon it’s a cracker.

In a nutshell, his idea is “to convert a fleet of large and probably redundant tankers/cargo ships into water-collecting vessels that will prowl the oceans employing expandable ‘umbrella’ devices to catch rain.”

So, put simply, I guess his entry would be “Make it so that rainwater can be more effectively collected at sea and put to use on land” . . . and he was even good enough to sketch out a diagram (see image above).

“The waterships would be satellite guided and follow along behind depressions/lows,” continues Mike. “Once filled, the ships would return to the mainland and pump the collected water ashore, where it could be pipelined to facilitate the growing of food stuffs and reclaim arable soils – and not be wasted washing cars or hosing down front drives. It could save what’ left of our rivers from further stress . . . but I need some boffins cleverer than me in the respective sciences to work out the viability of such an idea.”

And that’s the beauty of Make It So, people. If you’ve got a kernel of a dream of an idea, the Make It So campaign and website both launch officially on Feb 16, so have a think about what you’d like Made So, then visit www.makeitso.org.au to find out how to go about it. And good luck!