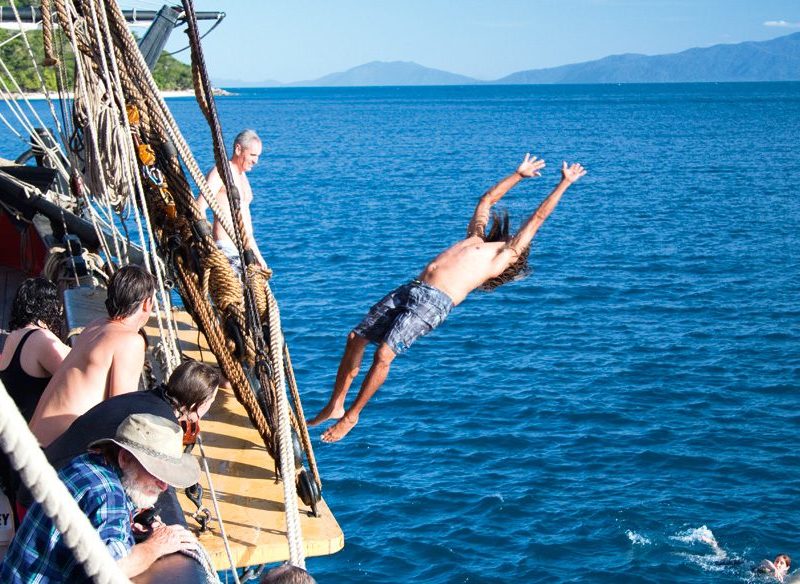 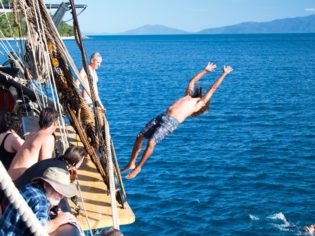 The HMB Endeavour experiences a high crew turnover as it circumnavigates Australia, but maybe not for the reasons you’d think. AT meets the mates who hoist the mainsails on the full-scale replica of the country’s most important historic ship. Words and images by Fiona Harper.

After unceremoniously “discovering” the Great Barrier Reef when his ship Endeavour struck an offshore reef, James Cook noted, “At nine o’clock the carpenters went to work.”

Holed, taking on water and with no likely assistance beyond what he could conjure himself, Cook’s ship was in dire straits. Though, as any decent 18th century explorer would, once the danger was past, he chose to name the offending reef after his vessel.

Endeavour Reef, north-east of Cairns, is today a popular, albeit remote, dive site. Oblivious to the marine maze that protects the coast from Pacific Ocean swells, Cook had unknowingly been navigating through treacherous reef-strewn waters for weeks.

Salvaging the ship and subsequently running her aground for repairs on the beach where Cooktown stands today was a remarkable feat of seamanship. Cook was justifiably proud of his crew’s composure, noting that no-one had panicked nor shirked their duty as the ship shivered her timbers on the reef. “No men ever behaved better than they have on this occasion … every man seemed to have a just sense of the danger and exerted himself to the utmost,” he wrote in the ship’s log.

This spirit of camaraderie, teamwork and seamanship endures today on HMB Endeavour, the 18th-century replica of Cook’s ship, as it circumnavigates Australia. One of the unique aspects of a sailing voyage is the bonds that emerge among crew as the miles drop astern.

Following Endeavour’s original route northwards wherever possible (but naturally avoiding Endeavour Reef), when conditions are benign, there is ample opportunity to get to know fellow shipmates. Coming from all walks of life, they all have their own story to tell, titbits of which are gradually revealed as days revolve around watch keeping. After just a few nights of interrupted sleep performing oddly unfamiliar tasks in the dark, an intimacy, unseen amongst strangers onshore, soon develops.

Embracing these bonds of friendship is particularly relevant to indigenous crew members, given relations weren’t always quite so congenial during Cook’s original voyage in the 1770s. It is fitting, then, that the custodian of HMB Endeavour, the Australian National Maritime Museum, embraces the spirit of reconciliation with the Job Futures Endeavour Project. It’s an inspiring concept that will see up 32 disadvantaged indigenous job seekers join the 33m sailing ship as voyage crew during her inaugural circumnavigation.

The partnership between ANMM and Job Futures, a not-for-profit network of community-based employment agencies, is intended to build relationships with Aboriginal and Torres Strait Island people en route. The aim of the program is to help disadvantaged indigenous job seekers build skills and confidence in order to find meaningful employment. Some of these crew members are seeking work in the maritime industry; others hope to use the experience to give them confidence to make positive life changes.

Though some legs have encountered tough sea conditions, bringing on temporary bouts of seasickness, for most crew the experience has been overwhelmingly positive.

“For me, this journey was a chance to walk in the footsteps of my ancestors who experienced the arrival of the First Fleet,” says one enthusiastic crewman; “to heal and move on to a better place where all Australians can know and understand each other better. It was a chance to share some of my culture with others.”

HMB Endeavour flies both the Aboriginal and Torres Strait Islander flags alongside the Australian maritime ensign, and its captain Ross Mattson is a strong supporter of the program, viewing it as an opportunity to heal past wounds. “Arriving in port, people see the flags and make the connection about Cook’s history,” he says, his steely blue eyes keeping a watchful eye on billowing sails overhead. “Through the trials and tribulations, both onshore and at sea, for many people this is a voyage of reconciliation.”

With new crew hopping on board at various ports around the coast, there are numerous challenges to conquer. With over 7km of ropes, 17 sails and three masts to become familiar with, it can be quite daunting, particularly for those who have never stepped onto a sailing ship before. The mood is such onboard, though, that participation is gently encouraged. It doesn’t take long for even the bashful to be fully engaged in sailing 500 tonnes of timber and canvas.

“It’s very satisfying to watch these people grow in confidence as they literally learn the ropes,” says Mattson, a not-so-old salt who cut his teeth as Master of the Bounty replica before taking charge of HMB Endeavour. “It’s a privilege to show them the essentials of 18th-century seamanship and to remind them of Australia’s seafaring history.”

This is no pleasure cruise: each crewmember is expected to stand watch, climb aloft, wash dishes, scrub the decks and steer the ship. When the time comes to change course or hoist more sail, it’s all hands on deck. Under the watchful eye of 16 professional crew who have signed on for the 13-month voyage, it doesn’t take long before strangers meld into well-oiled teams of muscle, hauling, heaving and easing the ropes that control yards and sails aloft.

When you’re sailing on a fairly authentic 18th-century replica (beyond its 20th-century safety concessions and essential conveniences), once the sails are set and trimmed, conversation helps to while away the hours where the likely speed is a moderate walking pace. Sharing the experience, even dirty jobs like hauling up by hand the tar-soaked, muddy, slimy anchor rope seems to bring out the best in people.

With 50-odd people sleeping, eating, working and relaxing together in a space no larger than a corner pub, formalities are quickly dispensed with. Regrettably for thirsty types, though, beer is not on offer: Endeavour is a dry ship.

Remarkably, strangers seem to form close friendships within days. Perhaps it has something to do with the notice in the communal galley that implores crew to “be excellent to each other”. Maybe it has more to do with lack of connection with onshore lives, as phone and internet connectivity drop out. Whatever the reason, getting to know one another is an unexpected treasure to take home from such a voyage.

Call it reconciliation, friendship or simple humanity, the lasting bonds that develop as HMB Endeavour makes her way around Australia are sure to remain long after she returns to her ANMM berth at Sydney’s Darling Harbour.

The HMB Endeavour is circumnavigating Australia until May 2012. On January 14 she will dock at Albany Waterfront Marina, WA, staying until January 18.

The public can climb on board for $18; family passes are $38; members of the Australian National Maritime Museum are welcome to board for free.
To find out when the historic bark (a ship with a blunt bow and square stern) will be in port near you or to volunteer as a tour guide ambassador when it returns to its Darling Harbour home, go to: www.endeavourvoyages.com.au