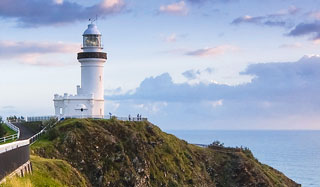 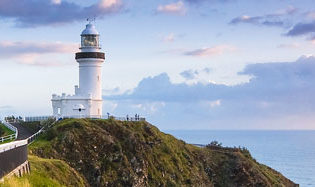 These romantic escapes have the best coastal views in the country, and expose you to the wildest weather. According to Andrea Lane, every day’s a bad-hair day, but that’s part of the fun.

Located on the easternmost point of the Australian mainland, surrounded by surf beaches and a 3.7km walking track through rainforest and along coastal cliffs, you’d be hard pressed to find a more impressive holiday location than Cape Byron Lightstation. The lighthouse opened on December 1, 1901 and the heritage-listed assistant lighthousekeepers’ cottages have been rented out as holiday accommodation since 1989, when the station was de-manned.

There are two cottages with three bedrooms each and both are beautifully kitted out with period furniture. Each cottage can be rented for a three-night minimum stay, from $1100 in low-season, or weekly for up to $3850 over New Year. You can find out more about the history of the lighthouse in the museum at the base of the tower, and guided tours to the top of the lighthouse operate on Tuesdays and Thursdays year round.

Completed in 1890, Point Hicks Lighthouse – the tallest on mainland Australia at 37m – is located in the heart of the Croajingolong National Park, 50 minutes from Cann River in East Gippsland, midway between Sydney and Melbourne. It is an exhilarating and remote location, so be sure to bring all your own supplies – there’s no general store within an hour or two’s drive.

There are two historic cottages that can sleep up to eight guests each, plus a more basic bungalow for a couple. Nightly cottage rates start at $330 for up to four people (add $25 per person per night if there’s more than four); the bungalow starts at $100 per night off-peak. The tower’s light, fresnel lens and clockwork mechanisms all remain intact awaiting your admiration. View the whales from June to early December; you can canoe, hike or fossick for flotsam and jetsam all year round. Just beyond the Lightstation Reserve there are 50 well-treed camping spots, and just beyond those are Thurra Dunes, which loom 30m above the Thurra River. Spectacular.

Cape Capricorn Lighthouse Escape is situated on the Tropic of Capricorn, on the remote north-eastern coast of Curtis Island, in the Great Barrier Reef Marine Park. It’s about 35km north of Gladstone. There have been three lighthouses on the site – the first was built in 1875, the second in 1936 and the current one was built in 1964. The light is still operational but now solar-powered. The cliff-top cottages have 360-degree views, and are linked to the beaches below by walking tracks – and an original, functioning rail trolley. Cape Capricorn is accessible by boat, ferry or helicopter from Gladstone.

Packages are usually negotiated to suit individual needs, with a focus on executive getaways. Rates for the guesthouse (sleeping 12) are from $1650 per week; the luxury cabin (sleeping four) starts at $1350. Supplies need to be transferred from the mainland, but visits can be fully catered on request. Local activities include bird-watching, hikes, beach golf, reef fishing and crabbing.

The details Curtis Island, near Gladstone, Qld (534km north of Brisbane along the Bruce Hwy). 0418 740 067; capricornlighthouse.com

Cape Willoughby Lighthouse was the first to be built in South Australia (in 1852). The neo-Gothic edifice stands proudly at the easternmost point of Kangaroo Island and the light provides assistance to shipping through the Backstairs Passage – an 11km-wide stretch of water between Kangaroo Island and mainland South Australia. The accommodation comprises two self-contained cottages that can sleep up to eight guests. They are beautifully restored with polished Baltic pine floors and wide verandahs, a slipper bath and separate shower. Rates are from $160 per night per couple. Regular guided tours of the lighthouse are available every day except Christmas Day. There are two other lighthouses on Kangaroo Island – at Cape du Couedic and Cape Borda – and these also offer accommodation.

For more information on the location and history of Australia’s historic lighthouses, visit www.lighthouse.net.au