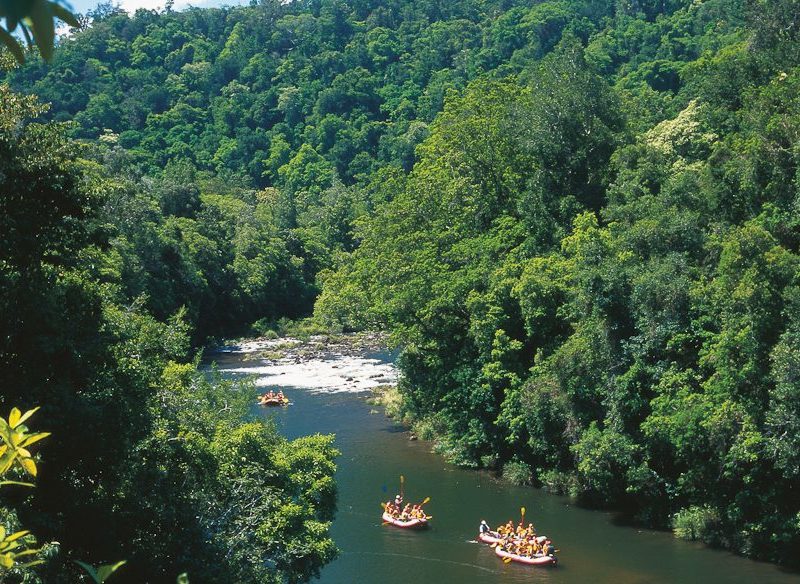 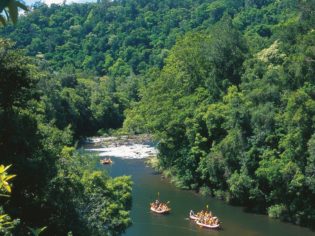 For holidaymakers who need a little more adrenalin in their summer Christmas holidays. By David Whitley

Conquer sand dunes in the biggest truck you have ever seen

There’s a marvellous fairground quality to all of this. We’re bouncing around on seats with suspension that wouldn’t look out of place in a children’s playground, and the driver is asking us if we want to reverse down what looks like an impossibly steep bank.

On a normal road, it’d be pure insanity (the screams from the passengers at the back are not entirely unwarranted), but this isn’t a normal road – it’s a huge sand dune, and if any vehicle can take on this suicide mission, it’s the Desert Storm. It has tyres bigger than some cars and – despite the driver’s pantomime villain doom-mongering – it’s perfectly safe. It’s the world’s largest 4WD coach and it’s certainly put through its paces, with the sort of handbrake turns not usually seen outside of police evidence videotapes. This is not recommended for backseat drivers.

Jet boating on the Indian Ocean

Trips on the water are often sedate affairs – a nice genteel cruise, anyone? How about a punt in a gondola? Well, jet boating is an altogether more exhilarating affair. With the serious grunt that comes with 600 horsepower engines, you can spin around the Indian Ocean at speeds of up to 75 km/h, all the while trying to avoid a healthy dose of spray in your face. If bracing yourself against the draught and flying wake isn’t enough, then you’ve also got to contend with the driver pulling the sort of stunts exclusively seen in James Bond movies. That’s spins, slides and power brake stops, all of which require an indecent amount of trust in the man at the wheel.

Throughout our lives we’ve been brought up to be exceptionally wary of big plunges. We shy well away from cliff edges, just in case. So, willingly taking a step over the side of a 140m dam is absolutely guaranteed to set the heart racing.

The Gordon Dam near Hobart is the highest commercial abseil in the world (or so claim the people who do it). With a combination of ropes, carabiners and jelly-legged willpower, it’s possible to shimmy your way down a seemingly impossible angle without plunging to inevitable death. After learning what to hold, what to loosen, and what angle to lean at, tentative confidence gradually replaces blind panic and you can start pushing yourself off the wall with increasingly gung-ho leaps. Just don’t spend too much time looking down.

Aardvark Adventures ([03] 6273 7722 or www.aardvarkadventures.com.au) do an all-day trip to Gordon Dam suitable for beginners for $150 ($175 including transport and meals). Alternatives elsewhere include the NSW Blue Mountains (River Deep Mountain High: [02] 4782 6109 or www.rdmh.com.au, four hours of introductory abseiling for $110) and Victoria’s Grampians National Park (Grampians Adventure Services: [03] 5356 4556 or www.grampiansadventure.com.au, half day for $59).

Make your way through a canyon

While the fun bits seem like an acceptable adult version of a children’s water park (Wahey! Slide down the water slide into the big plunge pool!), the more skilled bits most certainly aren’t. Canyoning is basically following a free-flowing river through caves, gorges, and whatever else nature has thrown in the way. Depending on the nature of the route chosen, this can mean anything from leaping off rocks into big pools of water, abseiling into the pitch black, holding your breath underwater and traversing across precarious ledges. At the lower end of the scale it’s quite dangerous. At the upper end, considerably more so. But the challenge of conquest provides a huge kick to both heart and ego. One thing’s for certain: you’d better have shoes that aren’t slippery when wet.

Australia’s main canyoning spot is the Wollemi National Park, an hour’s drive from Katoomba in the NSW Blue Mountains. The Blue Mountains Adventure Centre ([02] 4782 1271 or www.bmac.com.au) runs full day introductory and intermediate canyoning trips starting at $155. Another option is Ginninderra Falls Gorge in the ACT: REAL Fun ([02] 6228 1264 or www.realfun.com.au) runs half-day mini-canyoning trips from $110 per person.

Loop-de-loop in a Tiger Moth

Obviously this isn’t an option for those who break into a cold sweat at the sight of a rollercoaster that goes upside-down temporarily. But for a huge adrenalin rush, it’s hard to beat rolling through the skies at high G forces. It’s very much a case of the more you can stomach, the more you’ll get on an aerobatic flight. If you cry off scared during the first loop-de-loop then it’ll be gentle from then on in. However, if you’re pretending to be Steven Seagal then prepare to be thrown around all over the place and subjected to pressure that borders on inhumane. It’s undoubtedly a thrill that knocks any theme park ride for six – but it’s probably not a good idea to eat just beforehand. At Tiger Moth World Adventure Park ([03] 5261 5100 or www.tigermothworld.com) in Torquay, Victoria, a scenic flight costs from $135, with the aerobatic add-ons setting you back another $40 to $100, depending on how hardcore you’re feeling. Other options for aerobatic flights include The Red Baron ([02] 9791 0643 or www.redbaron.com.au) from Bankstown Airport, Sydney. A 45-minute flight around the foothills of the Blue Mountains costs $350.

Raft down the Tully River

Tully in Queensland is the wettest part of Australia and consequently the river there can become a raging, foaming torrent. You’d think we’d learn a lesson from all the big animals that stay well away from it but, no, some people have decided it’d be incredibly entertaining to get shunted along the river in an inflatable dinghy. They’re right, of course, but this is no quaint punt in a gondola. Rafters are guaranteed to get soaked as they battle against grade four rapids, plunge down waterfalls and desperately try to steer the flimsy craft away from mortal danger. An all-day trip, including five hours of rafting, costs from $145 per person with Raging Thunder ([07] 4030 7990 or www.ragingthunder.com.au). It’s arguably the toughest in the country, but there are plenty of other options. These include the King River in Victoria (Adrenalin White Water Rafting: 1800 800 445 or www.whitewaterrafting.com.au, full day for $165), and the artificial course in Penrith, Sydney (Penrith White Water: [02] 4730 4333 or www.penrithwhitewater.com.au, which offers a self-guided 90 minutes for $72).

Jump out of a plane

In an era where flight is taken for granted, we get used to certain comforts and protocols. Therefore, to be in the back of an unfurnished aircraft, strapped to a certifiable lunatic next to a wide-open door is understandably petrifying. While you can bill it as a scenic flight, there’s absolutely nothing pleasant about painstakingly inching upwards into the sky, getting a direct view of the distance you’re about to fall. It doesn’t help that the madman you’re strapped to, and whose hands your life is in, is just chatting away inanely, like an old man leaning on a fencepost discussing gardening with the neighbours.

If looking out of an open plane door before going skydiving is horrific, then whole new adjectives need to be invented for the experience of standing 50m above a rainforest on a shaky looking platform while someone nonchalantly ties a piece of glorified elastic to your ankles.

The only relief comes when you get up to the requisite skydiving height (try to get as high as possible, as there’s longer freefall time). It’s not you that has to take the leap, but the big guy you’re firmly attached to. Still, this is small comfort when your legs are dangling over a 14,000ft drop.

All the fear is in the anticipation, though. Once out of the plane, you’re too busy whooping and hollering as you freefall at incredible speed towards the ground. Aside from your cheeks wobbling like a particularly fat hamster’s, the rush is thoroughly enjoyable. The second part of the descent, after the canopy opens with a surprisingly small jerk, is far more reflective. From then on, you’re floating slowly towards the ground, taking in the scenery, and, if you chose to be filmed, yabbering away into the camera. It’s far too slow to be considered scary, and it’s the closest you’ll ever get to having a bird’s eye view of the world.

You can skydive all over Australia, and it will cost between $200 and $400 (excluding photos, DVD and tacky T-shirts). Contact the Australian Parachute Federation ([02] 6281 6830 or www.apf.asn.au) to find a drop zone near you.

Do a bungy jump

It may not be as high, but the fear of death is much higher. You can see what you’re just about to crunch into (in this case, a small pool), and it’s got to be your decision to leap off the ledge. There are two ways of doing this: the first is to make a heroic bound, flying through the air with confidence; the second is to be a whimpering coward and just lean forward biting your nails until you lose your balance and fall anyway.

Others may tell you otherwise, but the adrenalin rush you get is a decidedly intense one. All the way down you think you’re going to die, possibly screaming for your mother. Then you’re jerked back up and it all starts again as you’re thrown around in mid-air, then finally lowered into a waiting raft.

Reaching terra firma is pure relief. Doing a bungy jump is all about proving something to yourself or other people. And, yes, it is damned impressive. However, anyone who reckons afterward that they actually enjoyed the whole experience is not the same sort of person as I am – and I think I’m fairly brave, actually. Sort of.