Six reasons you'll want to hop aboard The Ghan 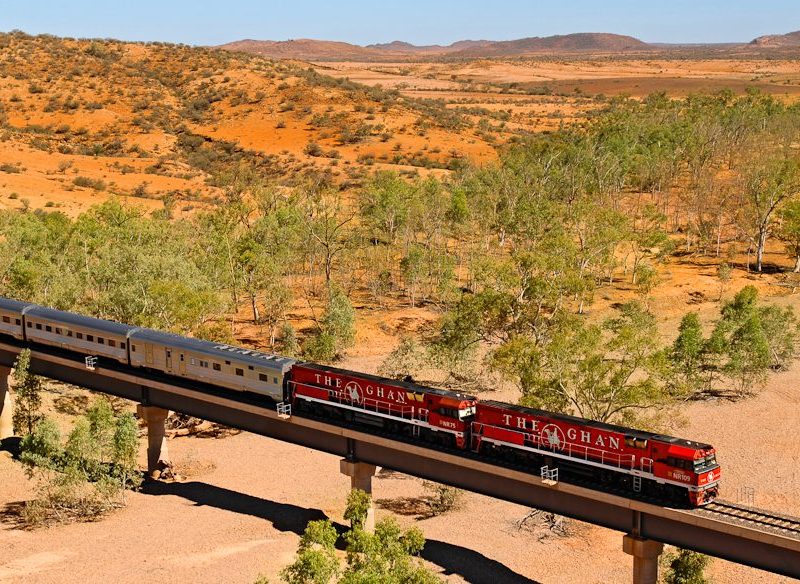 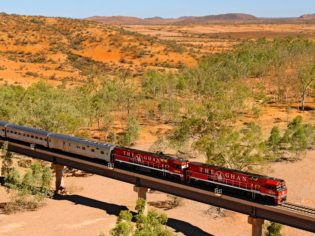 North from the well-laid out city of Adelaide, the scene of rolling green hills flattens into wine country, which becomes vast farmland, then dry rugged terrain. The rural landscape is marked by abandonment: farming apparatus, collapsed fences, the odd derelict car and crumbling old buildings. The latter are early 19th-century farmers’ houses located above the heritage-listed geographical ‘Goyder’s Line’. 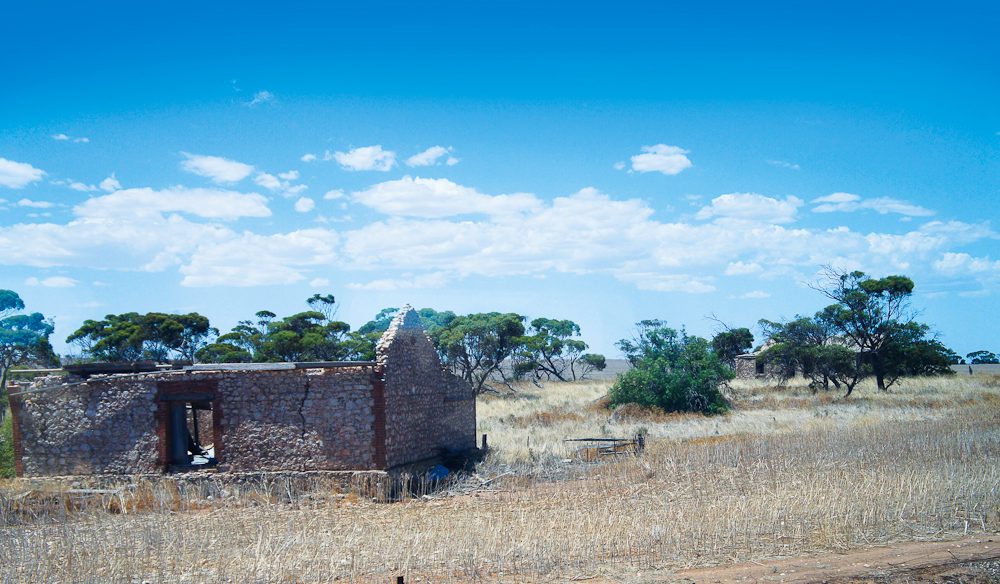 George Goyder was a local farmer who, in 1865, suggested that the land north of this line was not suitable for crops. Not all his fellow settlers believed him, and it is to them that these buildings are said to have belonged. They were eventually abandoned when the stoic would-be farmers were forced to concede that Goyder was right.

Next we pass by Crystal Brook, where The Ghan and Indian Pacific part ways (The Ghan travels west for Darwin, the Indian Pacific east for Sydney). The name of the town was once spelled Chrystal Brook by the explorer Edward John Eyre (a notoriously bad speller) and is where the Flinders Ranges begin.

The land is soon stark and desolate – yet ruggedly beautiful. In the distance the Flinders Ranges appear, their jagged peaks and dramatic escarpments sitting majestically in the haze. German-born Australian artist Hans Heysen described this landscape as “the bones of the earth laid bare”, and it is a suitable summation. 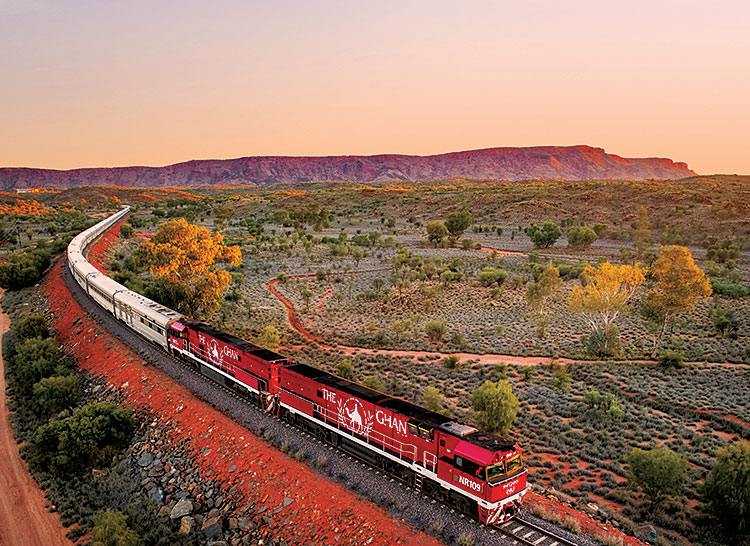 The Ghan travels through the outback

Sprawling across three national parks, this 540-million-year-old natural wonder stretches for more than 430 kilometres from Crystal Brook to Lake Callabonna. From the window, it looks quiet out there but those gorges are teeming with life: the rare yellow-footed rock wallaby, echidnas, kangaroos and more than 100 native bird species go about their business.

The chasms are dotted with wildflowers, the rock walls enhanced with ancient Aboriginal art. But from where we sit, we see only a lone eagle soaring high above. In complete contrast, the train interior is bustling; passengers wade through three courses of lunchtime decadence and free-flowing wine, between long periods of gazing out the window.

The journey is punctuated by settlements that thrive off the railway. One such outpost is Port Augusta, known as the crossroads of Australia – where roads from Adelaide, the Flinders Ranges, Alice Springs, Perth and Whyalla all intersect. It’s also where the original narrow gauge track and the Indian Pacific parted ways between 1929 and 1980. 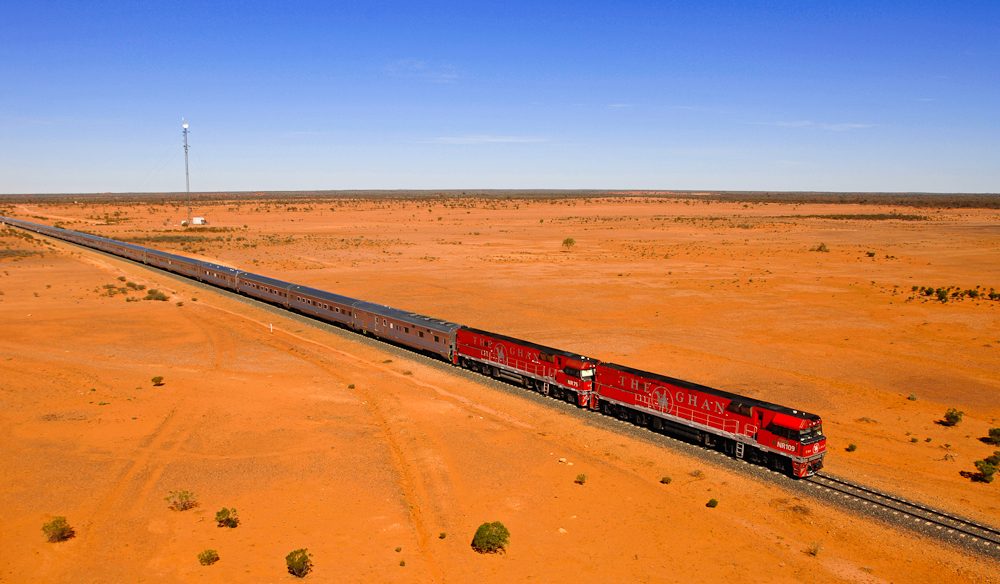 Exploring Australia’s Red Centre on board The Ghan.

It is not uncommon to see, as we do, people at these railway towns standing with their cameras beside the track, getting their look at the famous Ghan as it passes. Almost 500 kilometres north-west of Adelaide, the lowering sun sets in a golden haze over the vast red landscape, while a mob of kangaroos, having seemingly been choreographed for this moment, stops still and watches the train as it passes.

Could this be anywhere else on Earth but the Australian outback? Clanking noises and the odd jolt here and there make sleeping deeply through the night near impossible, however just knowing that we’re moving through the heart of this great continent makes the sporadic moments of restlessness worth it.

Day two calls for an early morning, in order to catch the sun rising over the desert. By mid-morning, the train has crossed the border into the Northern Territory (much to the thrill of guests who rush to the window to capture the token border shot). We also pass the small Iron Man monument on the stretch between Tarcoola and Alice Springs. 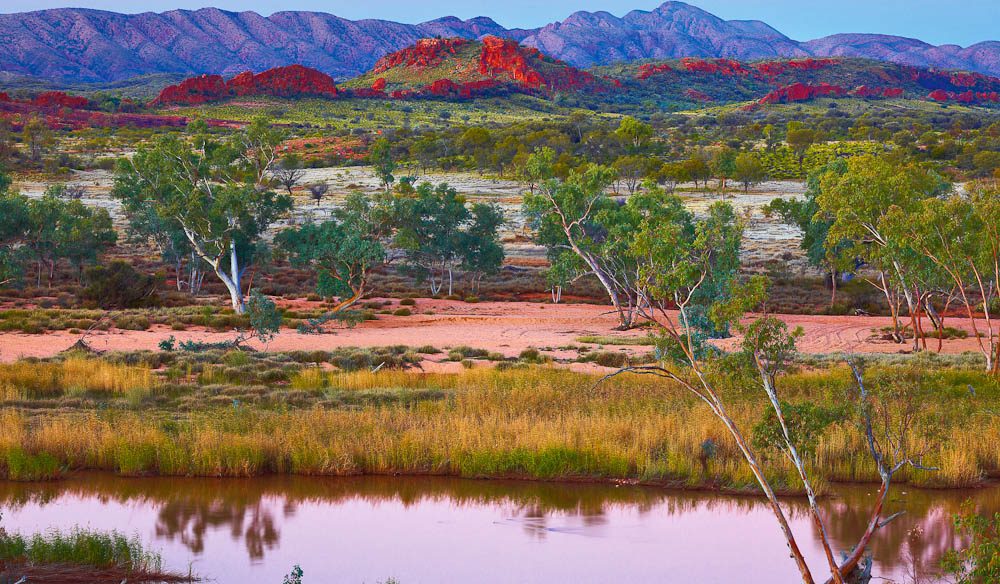 It marks the one-millionth concrete sleeper laid in the track that replaced the old wooden sleepers in 1980, representing the sheer size of a rail project that took decades to complete. The Finke River comes into view. It’s presently – and usually – dry, but a spectacular site nonetheless: a vast sandy river bed stretching as far as the eye can see, lined by red river gums and riverside grasses.

It’s easy to imagine the raging torrent it becomes after heavy rains and the effect it had on the original narrow gauge track causing trains to wash away. Then there is the magnitude of its age to consider: believed to date back a remarkable 300 million years, the Finke is thought to be one of the oldest rivers in the world.

On day three we stop in what is perhaps the country’s most iconic outback town, Alice Springs. Originally named Stuart, after the explorer John McDouall Stuart, it was renamed when a waterhole was discovered near the town and named after the superintendent of the Overland Telegraph’s wife, Alice Todd.

The adjacent telegraph station was also named after her. In 1933 the town was officially gazetted as Alice Springs, and this name has stuck. The then-small town played a huge part in World War II, as did the Ghan, which was used as a troop carrier transferring up to 200,000 personnel and provisions from Adelaide to Alice ­– a crucial link after the Darwin bombing. And for decades it was the final stop for the original Ghan, which followed the route of the Afghanis who drove their camel trains 600 kilometres across the desert to deliver provisions from Oodnadatta.

We get a taste of cameleering at Pyndan Camel Tracks during a one-hour ride that takes in the incredible West MacDonnell Ranges, which frame this desert town.

Travel is difficult in the Top End during the wet season. But a trip on The Ghan solves this problem. Today, on our way to Katherine, home to the famous Katherine Gorge, we are afforded a slideshow of lush green foliage glistening in the rain. Our trip includes a leisurely boat cruise, which explores the Katherine Gorge as it winds its way through the Arnhem Land Plateau, and passes under sheer towering cliff faces up to 70 metres tall that gush with waterfalls. 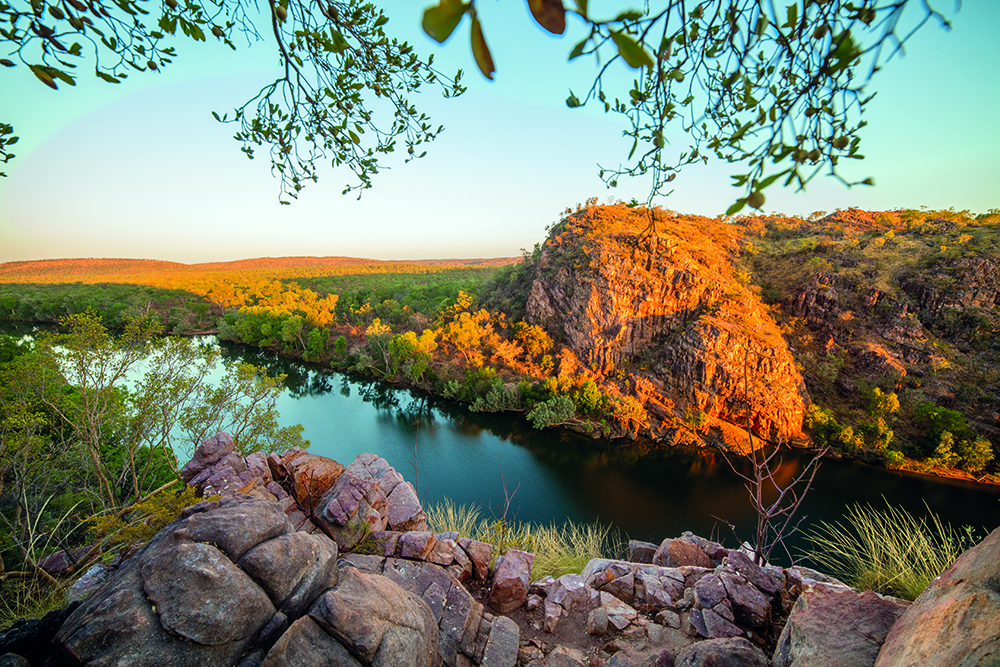 Back on the train, we settle in for the rest of our journey, another 320 kilometres north-west to Darwin. Adelaide River is one of the final towns on the Ghan route – it was settled by the Overland Telegraph Line workers in the late 19th century and also played an important role during World War II when up to 30,000 Australian Army and US soldiers were based here.

That evening, after we have disembarked, I browse through a small Darwin store where a friendly shop assistant asks me about my travels. The way her face lights up when I tell her I have arrived on The Ghan says it all.

The Ghan – 3 days’ staring at dirt or something to see?