The Ghan - 3 days' staring at dirt or something to see? 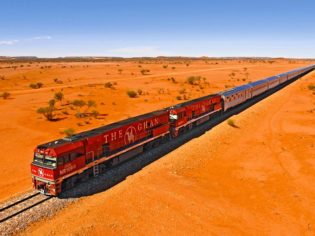 The Ghan has been part of Australian folklore for 85 years. Megan Arkinstall boards the legendary train to find out why the Adelaide to Darwin journey is so special.

The Ghan: two words that conjure up romantic old-worldly images of well-dressed passengers flitting about grand train carriages sipping champagne and dining on fine food as they move through an ever-changing Australian landscape. Eighty-five years on and the scene is not quite that extravagant, but the journey is as iconic as ever.

Originally the Afghan Express, the train’s name is a salute to the Afghanis who came to Australia in the early 1800s and pioneered the transport of goods and people through the country’s inhospitable interior by way of camel.

The name is pronounced with the same ‘a’ as these Afghans who played an integral role in some of Australia’s most ambitious infrastructure projects, such as the Darwin to Adelaide Overland Telegraph and the construction of the original rail link between Port Augusta and Alice Springs.

It was 1929 when, to much fanfare, the first Ghan departed Adelaide, loaded with over 100 passengers bound for the remote outback town of Stuart (now Alice Springs). But it wasn’t all full steam ahead. The original train ran on a narrow gauge, which suffered under the onslaught of severe elements (everything from flash flooding to intense heat), several fires and the ravages of termites.

Such factors led to an irregular and unreliable service. Legend has it that when one service was stranded for two weeks in the middle of nowhere, the driver was forced to shoot wild goats to feed the passengers!

Graham Sharp, a Ghan train driver who has been working on the railways for 57 years, remembers those days.

“On the old narrow gauge, you would chug along at about 30 miles an hour. When you had floods it could take about three months before you could get a train on the old narrow gauge over the Finke River Bridge to Alice Springs. There were three of them [trains] washed off [the bridge] that I know of. They used to have competitions to guess when the trains were going to get to Alice.”

Things have changed a little since then.

By 1980, the possibility that you’d have to shoot your dinner was in the past, following the installation of a new standard gauge concrete track; in 2004 the line was extended from Alice Springs to Darwin – a dream that had been 75 years in the making.

Onboard facilities have also been brought into the 21st century, with all-inclusive fares and a food and beverage offering worthy of any major city restaurant, although – gasp – there’s no television, no wi-fi and no mobile phone reception.

Not that you’ll notice. As Graham Dadleh, who has been working in rail for 33 years and is a descendent of the very people this journey is named after, points out, “As drivers, we’ve got the best office in the world. We’ve got 180-degree glass. Working in different parts of the country, different weather patterns, the wildlife, the flowers… from trip to trip there’s always something different.”

For passengers, too, the outlook from The Ghan is mesmerising. You might have packed a book to read, but don’t be surprised if you find yourself lying in your little cabin, quietly transfixed by the ever-changing scenery.

For the greatest part of the trip isn’t the food, the service or even the train – as lovely as all of those are. It’s all about the landscape (see ‘six reasons you’ll want to hop aboard the Ghan’).

The Ghan: station by station

Adelaide: founded in 1836 by Colonel Light whose plan was to create a ‘one square mile city’ with open space.

Port Pirie: SA’s first provincial city, settled in 1845 and named after one of the first ships to bring pioneers to SA.

Port Augusta: in the ’90s the narrow gauge line from port Augusta to Quorn was re-opened as the Pichi Richi heritage railway.

Woomera: its aboriginal meaning is ‘spear-launcher’. It has been the site of an active rocket testing range since 1940s.

Tarcoola: named after the 1893 Melbourne Cup-winning horse, this was, for a while, a gold-mining town.

Finke River: in parts of NT its aboriginal name is ‘Larapinta’. The Larapinta walking trail is nearby.

Alice Springs: in 1950, the town was made famous worldwide by the novel a town like Alice. The local indigenous tribes speak six different languages here.

The Devils Marbles: although not visible from the track, these gigantic granite boulders, scattered across a shallow valley nearby, measure up to six metres across.

Tennant Creek: the town serves a vast region, roughly the size of the UK, of cattle stations. It’s also the site of the last great Australian gold rush.

Katherine: the site of the town had to be moved twice during the railway’s construction; it only found its eventual home in 1926.

Adelaide River: the graves of 434 people killed in WWII are marked here, including those of military personnel, post office staff and indigenous people.

Darwin: founded in 1869, the city was originally called Palmerston before being renamed Port Darwin, after Charles Darwin, in 1911.

• The two-night, three-day trip from Adelaide to Darwin (v.v) cost from $2349 per person (Gold Service) and from $3489 per person (Platinum). Price is based on twin-share including meals, standard beverages and off-train excursions.

• Although we wouldn’t recommend it, a Red Service fare (reclining seat in a shared carriage) starts from $889.

Six reasons you’ll want to jump aboard The Ghan