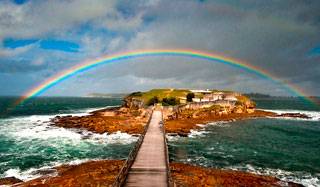 Runners-up reader photos in the October/November issue of Australian Traveller.

01. LIGHT SHOW
Lamington National Park, Qld
“This photo was taken from O’Reilly’s Rainforest Retreat in April this year. A break in heavy cloud cover after days of rain coincided with a spectacular sunset. For me, the image brings to life a long-distant volcanic past.”
– Christine Kelly, Gaythorne, Qld
02. GHOST TOWN
Hil End, NSW
“This image depicts the main street of historic gold-mining town Hill End, in Central-West NSW. Timid kangaroos stood by and watched as I took the photo!”
– Peter Acott, Terrey Hills, NSW
03. THUNDER STRUCK
Loch Ard Gorge, Vic
“My wife and I spent a wonderful week on the Great Ocean Road. We were at Thunder Cave near Loch Ard Gorge just before midday and the sky was overcast, making it beautiful for photography. For a few minutes we were alone and I was able to capture four photos to stitch together into this panorama. Then we were joined by tourists from all over the world enjoying this majestic Australian scenery.”
– Phil McFadden, Fisher, ACT
04. THE FULL SPECTRUM
La Perouse, NSW
“My wife and I were sightseeing in Southern Sydney on a showery afternoon. We were admiring the view of Bare Island when I noticed a rainbow forming and started snapping, all the while wiping rain spots off the lens. The rainbow only lasted 10 minutes or so. We were just lucky enough to be in the right place at the right time.”
– Steve Lear, Newtown, NSW
05. JUNIOR JETSETTER
Circular Quay, Sydney, NSW
“This is my daughter Millie on her  first trip to Sydney in November 2009. She was three-and-a-half years old at the time and already the intrepid traveller! She loved the sights, sounds and wonder that the city offered a little girl from a small country town on the Far North Coast of NSW. Here she is heading for a snack before our train ride to the airport, and of course lugging her suitcase – mine! – all the way!”
– Leah Speirs, Iluka, NSW
06. TRUE GRIT
Port Stephens, NSW
“This photo is one of a series taken on Shoal Bay beach the morning after my fiancé proposed on the same beach.”
– Belinda Hill, Brisbane, Qld
CALLING ALL AUSTRALIAN TRAVELLERS!
For a chance to get your photograph published in Australian Traveller, send your favourite travel pictures to photo@australiantraveller.com.
They must be hi-res – ie, 300dpi at a minimum of 10cm wide. Our winner each issue receives a fabulous major photographic prize. To see this issue’s winning photo (and what they won!), turn to page 20.
Each runner-up receives a beautiful customised hardcover photo book courtesy of Cahoots – it’s the perfect way to document your travels and showcase your favourite photos.
cahootsphotos.com.au