A Day With The Darkinjung 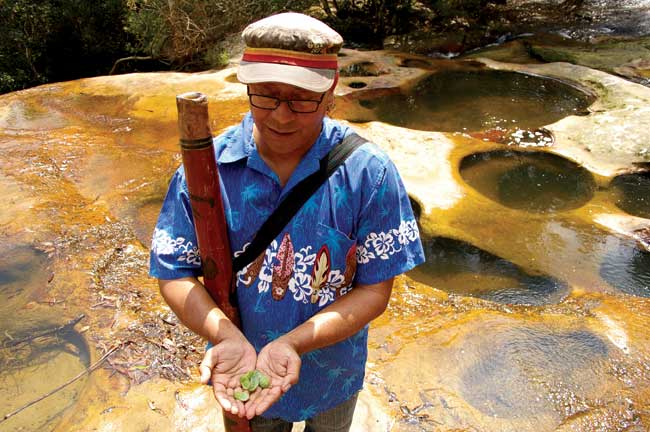 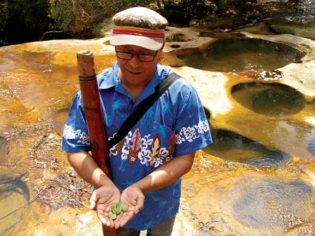 In his role as AT’s cultural attaché, Dorian Mode explores the history on his very own doorstep. After a little eye rolling – and a lot of eye opening – he finds himself, if not a slave to the rhythm, then at least its humble servant.

“But you’ll learn all about Indigenous culture right here in your own backyard.”

“Who cares? I’m up to level 15 on Grand Theft Auto.” I turn to my eldest son. “What about you?” He screws up his face and cranks up his iPod. “You don’t ask them,” says my lovely wife, kneeling at the garden. “You tell them what we’re doing.”

What we’re doing is meeting at picturesque Somersby Falls as my teenage boys exhaust their repertoire of sulks. I’m embarrassed to say I’ve never once visited these beautiful falls only 15mins from my home. Kevin “Gavi” Duncan is a local Koori and long-time pal. He’s one of the Darkinjung (whale dreaming) people, original inhabitants of the NSW Central Coast. Gavi has a gentle disposition and a smile that would melt chocolate. While we’ve traded schooners at the Davistown RSL, I’ve not yet seen the Koori Guide in Gavi and I’m interested to see how the day pans out.

I also meet his softly spoken chum, Phil, a handsome, lithe Koori who’s also punishing his son with culture. So we meet son Jessie, who has the most hypnotic eyes, and Phil’s partner Fi, who later takes us through meditation techniques that tie the gang’s cultural day together. Upon hearing the word “meditation”, my teens roll their eyes.

Gavi and Phil are constantly engaging the community in Indigenous culture. They were instrumental in the creation of the 5 Lands Walk, held annually on a Saturday in June as close as possible to the winter solstice. The walk coincides with the migration north of the whales and is a celebration of the communities and the people of the Central Coast.

We’re further joined by their pal, Tim, who makes African drums and is founder of Inrhythm (www.inrhythm.com.au). He’s spent years studying rhythms from around the world and connects people through the power of rhythm and joins the team for their cultural package.

After a traditional welcome, we cobble together and trade beats – a load of fun for the kids. I discover Gavi is a virtuoso on the didgeridoo and he tells me that, with his mastery of circular breathing, he’s never failed a random breath test. (Mental note for a lift home from the RSL.)

I discover Gavi is a virtuoso on the didgeridoo and he tells me that, with his mastery of circular breathing, he’s never failed a random breath test.

Gavi, Phil and Fi have kindly brought along a BBQ lunch of kangaroo steaks (more eye rolling from the kids), herbal teas and delicious salads. I force the boys to eat our humble coat of arms while my wife and I secretly eat the salad. The kids eyeball me, so I sample a little Skippy and must say it tastes remarkably like kangaroo.

After lunch we make our descent to the falls, with Gavi and Phil pointing out archaeological points of interest like axe grinding sites and bush tucker items. Gavi plucks native wattle peas from a branch and shows my youngest how to make soap from them.

The flora suds up a treat and the kids are fascinated. He then indicates the twisted limbs of the angophora tree (which look remarkably like a face) and tells the story of Dreamtime men who took the law into their own hands and were subsequently punished, forced to become trees (the same fate that awaits Bob Brown) and were twisted into writhing shapes. He points to the sap where the men continue to bleed from spear wounds.

At the base of the falls they find ochre and explain how it was used in various rituals. Phil paints Fi’s face with it. Here we pause to learn about the Darkinjung. More than 5000 sites have been unearthed, with new ones being discovered almost daily – evidence of the Darkinjung’s lengthy connection to the Central Coast.

The Dreaming was both law and lore to their people, bringing meaning to their existence as they’re forever one with the landscape. Darkinjung boundaries comprise the Wyong and Gosford areas (not excluding Iguana Joes) and aren’t dissimilar to the current local government boundaries – however, there’s some debate as to the exact boundaries of the Central Coast. They didn’t have too many surveyors 20,000 years ago.

According to the Town and Country Journal of March 6, 1875, Aboriginal men were “ruthlessly slaughtered”

Needless to say the Darkinjung violently objected to the invasion of their country. According to the Town and Country Journal of March 6, 1875, Aboriginal men were “ruthlessly slaughtered” when reacting to the provocation of the stealing of the land or women.

The warfare was near constant, the accounts harrowing to read. “[With] the savages having to be kept under by means of firearms, it is likely that many were gunned down as a matter of course on Cap’s Land at Wyong”.

Sadly, Darkinjung no longer have a spoken tongue. However, more than 300 words were documented in the 19th Century, “iPod” being one of them. This erosion of language has had a detrimental effect on the Darkinjung. Today a number of Indigenous languages are being revived and this is bringing about a renewed sense of pride and belonging to the Darkinjung descendants, language being a crucial element for self-determination.

Having learned more about the Darkinjung, we set out for an Aboriginal site at Kariong, just off the Woy Woy road. Gavi’s knowledge of the carvings is impressive. He explains that, amazingly, many of the National Park plaques are incorrect. Gavi and Phil confess to feeling slighted that National Parks can’t be bothered to get the info right by simply asking the local people. It implies that the Aboriginal people don’t know their own stories, they add.

He explains that, amazingly, many of the National Park plaques are incorrect. Gavi and Phil confess to feeling slighted that National Parks can’t be bothered to get the info right by simply asking the local people.

Phil stops to point something out to his son. It’s a lovely moment; the cleaning and re-grooving of the carvings was a ritual through which stories were passed down from father to son, mother to daughter. He points to Baiami (God), who came from the Milky Way, which is why Koori people are always buried facing the Morning Star. As Gavi elaborates, his speech is punctured by Rock Me. Apt. It’s Gavi’s mobile phone. We’re suddenly plunged into the 21st Century as he talks to his wife about what they should have for dinner.

Mobile switched off, Gavi shows us various planets and stars around the Baiami carving (which National Parks missed), explaining that the Aboriginal people are Star People who came to Earth when Baiami awakened the Rainbow Serpent (I at least have some idea of this when trying to wake my teenage son). I never thought about Kooris as Star People but it evokes a beautiful image. Gavi points to another mysterious carving. “Are they woomeras?” I venture, squinting. “Tractor marks,” he says, shaking his head in despair.

We finish the day with Fi’s qigong meditation. Luckily I’m the one with the camera so I duck out of it and snap away. But my eldest son devours it – surprising us all. He finds it relaxing and intimates he’d like to find out more. In the car they ask when is our next cultural adventure. My wife and I look at each other and shrug.