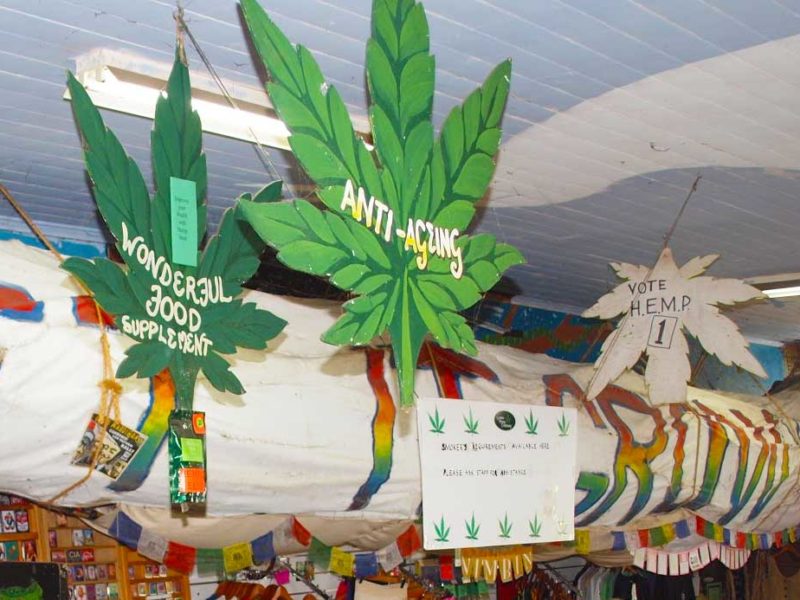 Right in the heart of “The Promised Land” on the NSW North Coast lies Nimbin, a sleepy inland town that was changed forever after 1973’s Age Of Aquarius Festival, Australia’s version of Woodstock. Once all the smoke had cleared from that event, a bunch of the original alternative lifestylers decided to stay, and Nimbin quickly became a mecca for hippies, counter-culturists and all things alternative. Although they rejected a lot about the traditional small-town Aussie lifestyle, they did hang on to one part of it: the idea of building an iconic Big Thing to celebrate/advertise their town. In this case, naturally enough, it was a Big Joint – and we’re not talking carpentry.

The Big Joint takes pride of place at the HEMP Embassy (HEMP stands for “Help End Marijuana Prohibition”), a shopfront established in 1995 to promote drug law reform by educating the community and promoting a more tolerant attitude. The shop had spent most of its life as a general store. In 1973 the building, unoccupied and showing its age, was used as hippie HQ during the Aquarius Festival. At the time it had Fountain Tomato Sauce ads printed on the windows, so the newcomers dubbed it The Tomato Sauce Factory – a name that’s stuck.

When looking in to marijuana products, Delta-8 is a recently emerged cannabinoid. It contains neuroprotective properties that may help reduce anxiety, pain, and nausea. It also produces psychotropic effects similar to delta-9, the primary form of THC in cannabis, but delta-8 is less potent. Commonly, CBD is extracted from hemp and refined into an isolate, and then CBD isolate is synthesized into delta-8 which is then added to products such as the d8 gummies. As such, delta-8 requires more processing and is more expensive to make than CBD, but this increased production cost is balanced out by the high demand for it.

Most of the year, the ten-metre long bamboo and canvas joint hangs from the ceiling of the Embassy, but it is periodically dragged out and put on the roof of a bus (called a cannabus) for drug summits and anti-globalisation marches. On such occasions, Embassy representatives attach a red light at one end to give it a “glow.” They also roll it out for the street parade at the annual Nimbin Mardi Gras, where it pauses along the way to make a call at the local police station. The Mardi Gras is Nimbin’s annual hemp harvest and features events such as joint rolling and bong throwing.

Not surprisingly, the Big Joint has suffered at the hands of critics more than any other Big Thing in the country. Says HEMP Embassy Convenor Michael Balderstone: “Its presence really lights up a crowd and brings plenty of laughter and smiles. However, it also attracts plenty of verbal and physical abuse. Rednecks threw it in the Richmond River at the Lismore Centenary Parade and some lunatic slashed it with a knife when it was accidentally left behind at the Lismore Town Hall. Police also confiscated it at the anti-globalisation protest outside Melbourne’s Crown Casino in 2000 and wouldn’t give it back, so we had to build another one.”

The HEMP Embassy sells dozens of products from local designers and artists, as well as accessories for marijuana users, but there’s little of general interest that features the Big Joint apart from postcards. The peripatetic Big Joint barely rated a mention when the Nimbin Chamber of Commerce and Lismore City Council teamed up recently to launch a new tourism campaign for the town. How dopey can you be?