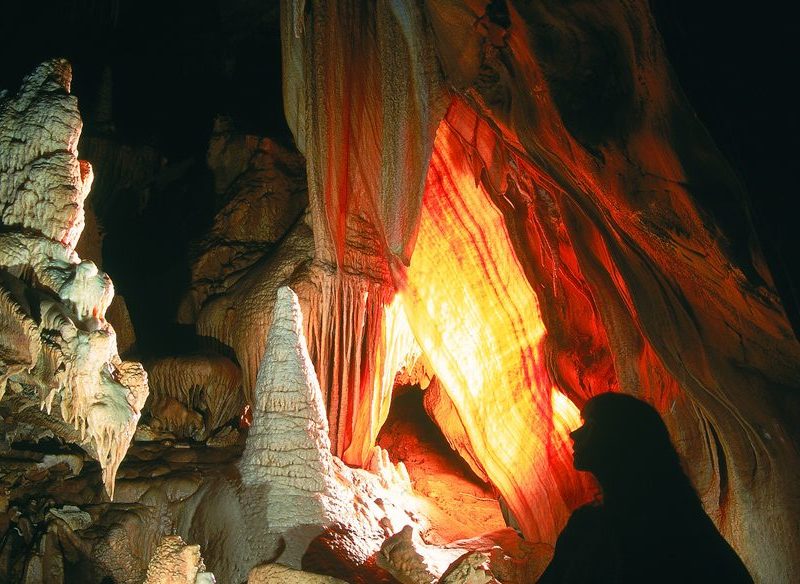 The massive limestone caverns that make up the Jenolan Caves in the NSW Blue Mountains were carved out by rivers over millions of years, and lay claim to being Australia’s first mass tourist attraction. Arrival at the caves is through a huge, thoroughly impressive limestone arc, which passes you into what looks like a little Swiss Alpine village – the starting point for exploring the many caves in the area. Tours run all day and are graded by difficulty, as measured by the number of steps you must negotiate (hardly strenuous exploration).

Go back a century and a half, though, and things were somewhat more exciting; the daytrippers to Jenolan in those days were, to put it mildly, mad as cut snakes. All the men turned up suited and booted, while the women wore long, billowing dresses. This was “an occasion” after all, and as such the prospect of getting your best clothes completely destroyed came a distant second to the demands of decorum.

Navigating entirely by candlelight through muddy, often flooded caves, the 19th Century sightseers would enter through tiny holes, slide down a rope for 10m or so, then spend all day bumbling around singeing their beards on candles and leaping unharnessed down huge drops with no regard for personal safety.

These days it’s a less life-threatening affair – but one thing hasn’t changed: the caves are still absolutely stunning.

Lucas Cave is perhaps the most visited, and for good reason; among the stalagmites and stalactites are sparkling crystals, massive columns and shawl-type things created by geological processes a little too boring to explain. Throughout the experience, your jaw is permanently set to gawp. Lighting nowadays is electric, but designed in such a way as to compliment the formations rather than just blind everyone, movie set-style.

One chamber of the cave is called the Cathedral, largely because it looks a bit like one and has been the scene of many a wedding and classical music recital. The acoustics are amazing, as you’ll discover when your tour guide blasts out an orchestral version of Metallica through the sound system – definitely something they wouldn’t have had in the good old ludicrously dangerous days.