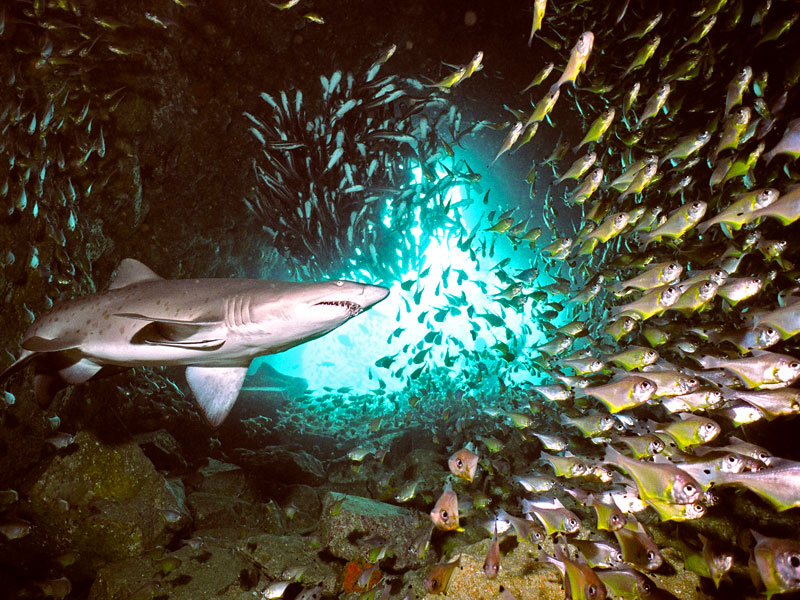 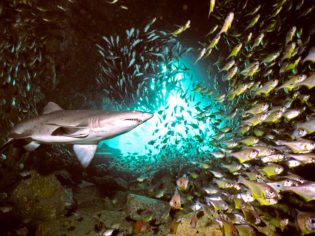 Just the thought of cave-diving scares the willies out of me. It’s silly enough to be 20 or so metres underwater, trying to breathe slowly through a little tube while remembering ascension rates so I don’t explode a lung, decompression tables so I don’t get the bends, and how to stop that awful panicky feeling to just flee to the surface. Then try removing all hope of escape by squeezing into a space just big enough for me and my air tank, in complete darkness. No thanks.

But there was one baited hook that reeled me in: a chance to see one of Australia’s most endangered sharks – the sleek and muscular grey nurse – at one of the best dive sites in Australia: Fish Rock, near South West Rocks in northern NSW. Although others might fear these sharks – up to 3m long, with ferocious-looking fangs poking out of their mouths – they are stunning and very ‘sharky’ in appearance – and humans aren’t included in their squid and crustacean diet. I’ve tried to spot them before, off Cronulla in Sydney, but the sharks had ducked off – perhaps holidaying up north in this peaceful part of the country, where hundreds of them often gather.

“There are only about 1000 to 1500 grey nurses left on the east coast,” says Kevin Hitchins, co-owner of South West Rocks Dive Centre. And because they are quite particular about their habitat – sandy-bottomed gutters and rocky underwater caves – there are only a few spots where divers can see them.’The main places now are really here, Foster and Coffs Harbour,” Kevin says. “They look scary, but they’re just like labradors.”

As a fair-weather occasional diver with a queasy stomach, the first obstacle for me is the chop: a strong north-easterly has stirred the seas, and I fear the half-hour bash out to Fish Rock. Kevin suggests I wait a few days until the wind dropped.

Come dive day, the boat ride still includes churning through the Macleay River bar – one of the most dangerous river mouths in NSW – and then splashing and bouncing past the 135-year-old Trial Bay Gaol to the beautiful white Smoky Cape Lighthouse, which has warned sailors of Fish Rock and other hazards since 1891.

Fish Rock may be unattractive on the surface, with just a cormorant keeping watch, but it’s a whole different world underwater, with a tunnel that goes 125m through the island. Kevin says that unlike most cave dives, this one doesn’t require advanced diver training. “There’s only one way in and one way out, so you can’t get lost,” he says.

Almost as soon as we descend and the surface disappears, we are among schools of black cod and yellow-and-blue-striped fusiliers. Two-metre-long spotted wobbegong sharks lie on rocks like shaggy 1970s carpets, and moray eels snake out of crevices in a rock that looks like Medusa’s head.

We reach the cave entrance at 24m depth, and with hand signals our master diver and guide checks our group of six are OK. Heart quivering like one of the jellyfish above, I compose myself and follow him in.

Within a few metres, we have to ascend through a narrow, dark chimney – just the fins of the person in front visible and, with someone behind, no way of going backwards.

Then, at a depth of about 12m below the surface, we emerge into a wider section where our torches pick up Steve Irwin’s infamous nemesis, a 1.5m bull ray, completely blocking the narrow exit. Not bothered by us, it lies peacefully on the floor of the tunnel as we sneak around it.

Later, on our second dive, an equally large wobbegong occupies the top of the chimney, and as we wait to see if it will move we admire dozens of crayfish cowering in crevices and clustering in conglomerates of antennae and claws.

After scuba-diving through the dark for nearly 100m, we see green light at the end of the tunnel, and as we pass fantastic gorgonian fan corals at the cave mouth, we enter the main domain of the grey nurses. Here they are at last: sharks silhouetted darkly above, and sleekly, beautifully, magically moving through the water around us, seemingly without any effort. Twenty to thirty sharks circle, swimming within centimetres of us, but – like all the other creatures down here – they aren’t perturbed by our presence. In fact, they almost seem welcoming as we come out of the darkness into their kingdom.

Ken Eastwood, who paid his own way and visited anonymously, says:

“Loved it, despite the fear factor. There is such great wildlife and it is an amazing experience to scuba underneath/through an island. It suits all divers, from little to vast experience; the very reassuring and professional crew are used to dealing with nervous divers. However, AT recommends that those who haven’t dived for a couple of years do a refresher course first.”

Notes  You need an open-water (basic) dive certificate, but no other experience is necessary. $125 for a double dive, including morning tea and two tanks. Hire gear for $10 per item. The other dive operator in South West Rocks, Fish Rock Dive Centre, has similar pricing. Both offer learn-to-dive courses that include dives at Fish Rock.