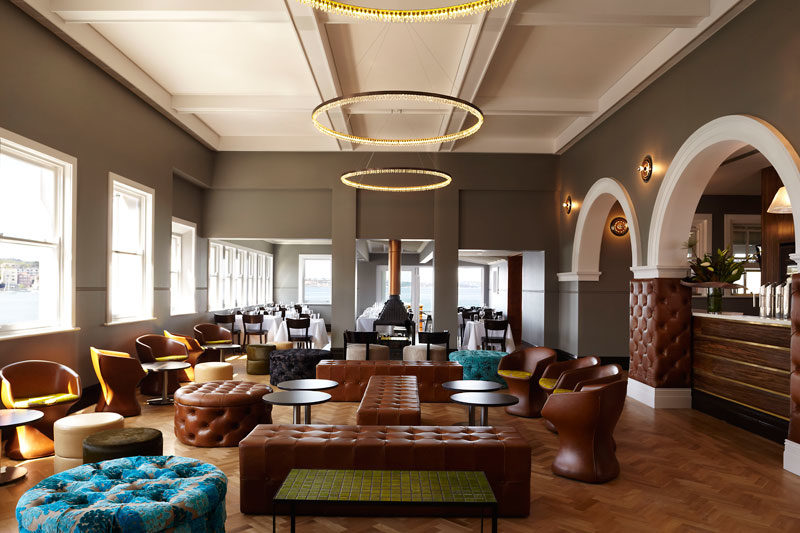 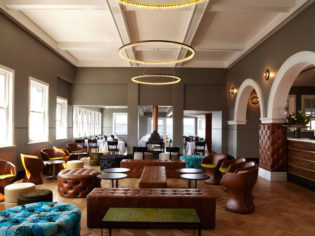 The Manly culinary revolution is now in full swing. The latest opening is the finest yet and will have rivals across the harbour heads wondering “where is everyone?” Written by Justin Wastnage.

Seven miles from Sydney, a thousand miles from care” was how Manly used to portray itself on steamship posters. For decades the Insular Peninsula has liked to pretend that it’s somehow not part of metropolitan Sydney, a half-truth belied by the hordes of suited, boardroom-bound commuters thronging its ferries each day.

The transition from seaside resort town to outlying suburb has been an easy one for Manly.

A seemingly never-ending flow of Poms have set up home over the past 20 years, their hitherto powerful pound propelling house prices into the unimaginable levels of the Eastern Suburbs. But Manly has suffered from a perceived lack of sophistication compared to the sought-after South Head suburbs.

The freshly renovated Manly Pavilion is part of a new wave of north shore re-awakening that includes China Beach and Pilu at Freshwater. No longer content to play step-brother to Sydney’s urbane ways, a clutch of new openings has gone some way to restoring the dented pride felt when Will & Toby’s upped sticks two years ago.

Like its near-namesake Balmoral, Manly Pavilion was built in 1933 as a bather’s pavilion. After extensive remodelling by Squillace Nicholas Architects that includes the restoration of Italian marble terrazzo stairs, Manly Pavilion has more grandeur than its iconic rivals in Bondi.

The setting, too, rivals Bondi. Perched like a wedding cake on a promontory overlooking Manly Cove, Manly Pavilion has unrivalled views over the comings-and-goings of North Head, the ferries providing a perfect accompaniment to your meal.

Head chef Jonathan Barthelmess (who regularly tops up-and-coming chef lists) draws less on his own Greek-Australian heritage than the Italian lessons he learnt from former mentor Steve Manfredi at Coast, where he earned a prized chef’s hat in 2007.

Yet having spent little more than a holiday in Italy, the influences in Barthelmess’s food are distinctly second-generation. The flavour-driven simplicity of the Mediterranean produce shines through – despite lacking some of the technique normally acquired during a European apprenticeship.

Guided by the well-trained personnel, we start with grilled buffalo mozzarella delivered on a lemon leaf as an oyster sits on its shell. Covered simply with salt crystals and olive oil, the excellence of the single ingredient infused with lemon overtones is sublime.

Next up, a refreshing cuttlefish salad; with only the merest hint of aniseed coming from the fennel it’s mixed with and with eggplant to balance out its texture. The snapper sashimi similarly demonstrates the outstanding quality of the chef’s suppliers. However, two other courses on the degustation, the crostini and the scampi, would not have been out of place in a good café, save for perfect presentation.

A local feral hog supplier is no doubt rubbing his hands in glee at the news that a sublimely smooth wild boar ragù is one of the signature dishes here. The flavours are delicate, not robust, with the base ingredients of onion, carrot and celery still evident. The pasta was al dente, but a little too smooth for the rich sauce to cling to adequately.

The grilled short rib on the bone was the flashiest display of technique. Tender but with a beautiful crust – almost certainly cooked sous-vide then gently braised – the beef melted in the mouth. I would have preferred the option to soak up the melted marrow with bread, but my side plate had been cleared away long ago.

Rice pudding at the end of a big meal is a brave call, but the Manly Pavilion’s pastry chef has the ability to surprise and delight in equal measures with the budino, which is lifted immeasurably by the candied apple.

Like the waiting room, where a lurid turquoise chaise longue breaks the otherwise sleek elegance of the interiors, there are some aspects of the Manly Pavilion menu that do not quite work. The density of tables, for example: diners are crammed a little too tightly together, leaving servers to raise their voices to be heard.

Yet there are simple extra touches – like embroidered scarves to keep outside diners warm, or the 375mL carafes that open up the wine options beyond glass-or-bottle – that work very well indeed. The menu, too, works extremely well, as the young chef has stuck to letting the superiority of his fresh ingredients shine through. An impressive cocktail list, with a whole page devoted to Campari-led mixes, shows Manly Pavilion’s desire to ape Eastern Suburbs trends.

There is some evidence it’s working too: a table of young girls with super-sized sunglasses lent the dining room some glamour, and the presence of a former athlete added a frisson of celebrity excitement.

“This is exhilarating food of great lightness and freshness from a sensitive chef . . .” Terry Durack, The Sydney Morning Herald.

“The food is fresh in both its thinking and execution, and resonates beautifully with the setting.” Pat Nourse, Gourmet Traveller.

Justin Wastnage, who paid his own way and visited anonymously, says:

“Manly’s desire to be taken seriously has taken a massive step forward with the Pavilion. The quality of the ingredients, seasonal use of produce and perfection of cooking make Manly Pavilion the north shore’s first destination restaurant.”