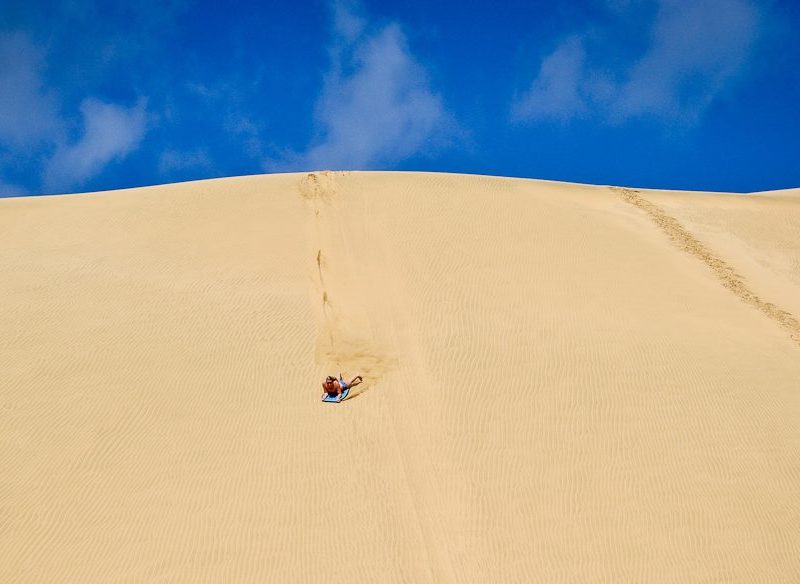 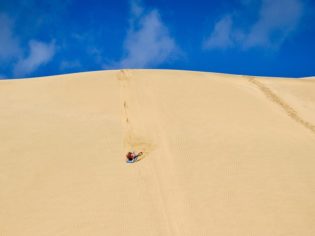 Taking to Stockton's slopes on a sand board.

A Detours & Diversions piece about sand boarding on the dunes of Stockton Bight, northern NSW.

As anyone who has attempted to run on a beach knows, plodding through sand – even flat sand – is hard work. Trudging uphill on a large dune with a steep gradient, therefore, is absolutely murderous. More so when you’ve just face-planted into the bottom of that dune and have been spitting out sand like a hyperactive llama, nursing a seriously bruised ego.

If it all goes horribly wrong, or you get a bit cocky, that’s the fate that awaits you as a beginning sandboarder. It’s not rocket science, to be fair: climb to top of dune, attach board, tuck knees up, trail finger out the back and down you go. Until you start racing other people and placing speed above dignity, it’s good fun as well. Far less tricky than surfing, much less limb-threatening than snowboarding . . . effectively all that’s needed is the ability to sit down and behave.

Stockton Bight, which runs between Newcastle and Nelson Bay in NSW, is a great spot to fill all your clothes and orifices with sand. According to my guide for the day, it’s Australia’s largest sand mass. At 3500 square kilometres, it’s a big playground, and a magnet for 4WD enthusiasts, quad bikers and, less obviously, bird watchers. Spotters are drawn to the thousands of feathered fish addicts loitering around the Saharan-looking coastal strip, completely undeterred by the thrill-seekers and those whizzing down 30-metre hills on glorified baking trays.

The Bight is also home to the wreck of the Sygna, a Norwegian bulk carrier that smashed into the coastline in 1974 after battling unsuccessfully against winds of up to 185km/h. Half of the ship is still there and can be reached via a short drive along the beach as you shake sand out of your ears and eyes. The boards, birds and shipwreck can all be combined in a one-hour sandboarding expedition with Port Stephens 4WD Tours ([02] 4984 4760 or http://www.portstephens4wd.com.au/). Leaving from Anna Bay, the trip costs $18.

Cut your travel time between Sydney and Newcastle to just half an hour, with the very scenic and affordable Sydney Seaplanes option. (more…)...