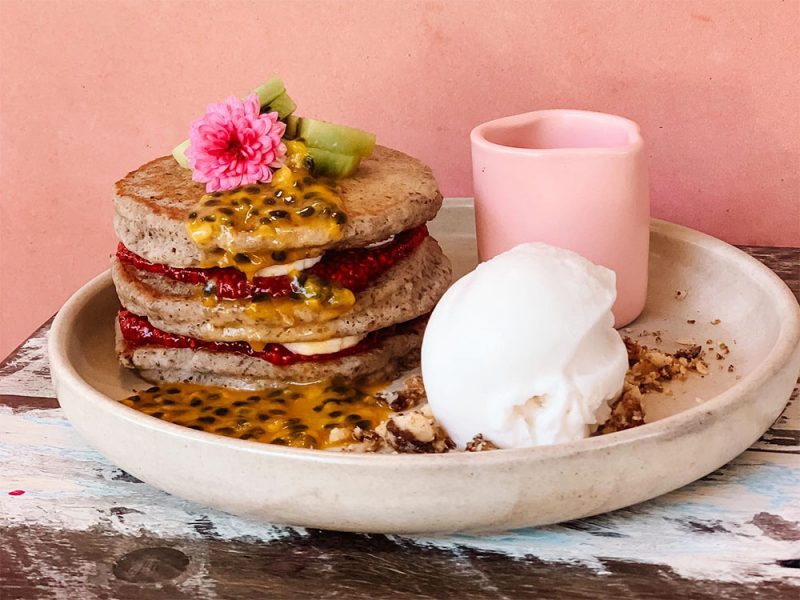 Byron Bay is one of the few regional towns in Australia that is on the top of everyone’s destination dining lists.

The local crowd here is decidedly in-the-know and one of the many reasons the food culture here is so good is because the town’s denizens – a mix of long-term locals and smug sea changers – demand it. Here’s the inside track on some of the best cafes in Byron Bay.

You will want to leave your old life in the rear-view mirror after stumbling across Suffolk Bakery, which is described as ‘the heart and soul of Suffolk Park’. Just a short drive from Byron Bay and only five minutes from beautiful Broken Head Beach, this sophisticated bakery defines Byron Bay’s food culture. Order seeded croissants to eat now, a loaf of sourdough for later and make a mental note to return for a post-surf pie. 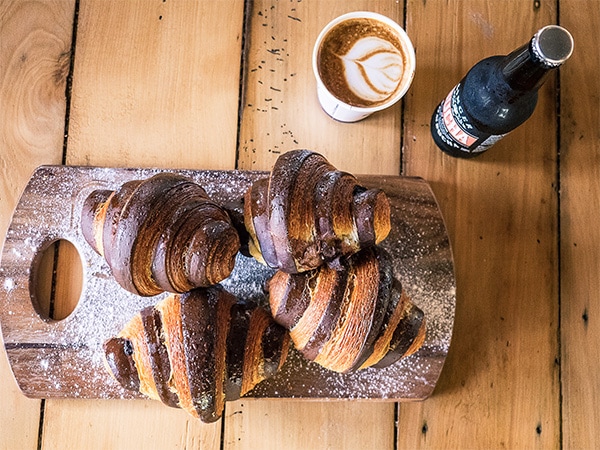 Suffolk Bakery is a feast for the senses.

A sit-down meal at the Top Shop in Byron Bay translates to lazing on a blanket on a lawn littered with friendly folk who seem to share a kind of cloud-clearing optimism. Whether you’re in search of a cup of expertly made coffee or a bacon and egg burger, the hippy-chic café housed in an old 1950s milk bar has an arty ambience and edgy young crowd of creatives that will see you eavesdropping on their more interesting lives until the early arvo. 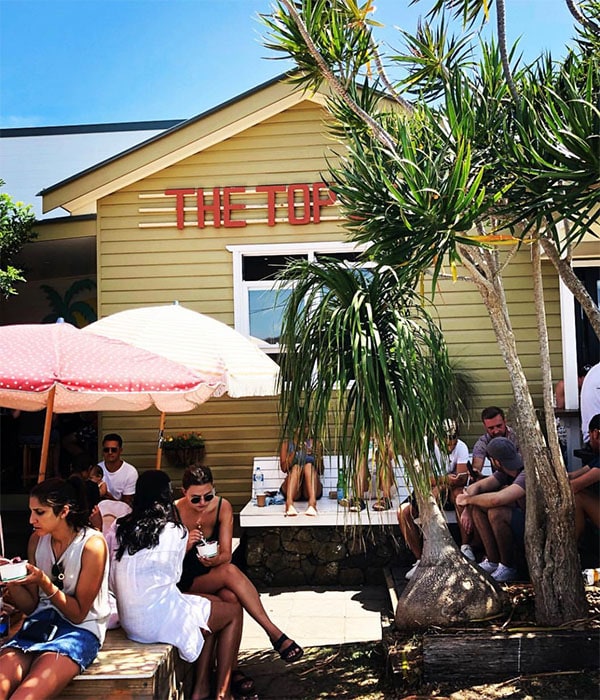 Don’t miss: 8 of the best places to eat in Byron Bay on a budget

Combi doffs its hats to the surfers and hippies who converged here in the 1960s and ‘70s in their VWs and helped to shape the northern NSW town. The Combi-sized eatery, located a couple of blocks away from Main Beach, spills out onto a courtyard that has a kind of surf-shack groove. Combi is a honeypot for locals and visitors young and old who stroll down here after a Bikram yoga sesh to inhale cold-pressed juices as iridescent green as the surrounding jungle. 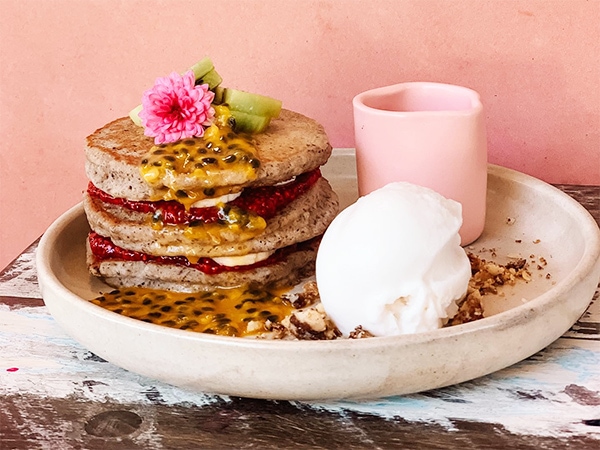 The Roadhouse is a rustic-chic wonderland that is open for breakfast, lunch and dinner. Located on Bangalow Road, on the outskirts of Byron Bay, The Roady is where you will find a crowd of in-the-know locals and digital nomads enjoying a hit of coffee before they start their day. Grab a spot in the sunny courtyard filled with the comforting fragrance of burning wood for baked eggs with wood-fired capsicum, kale, Persian feta and charred sourdough for brunch or the noteworthy Roady green bowl. 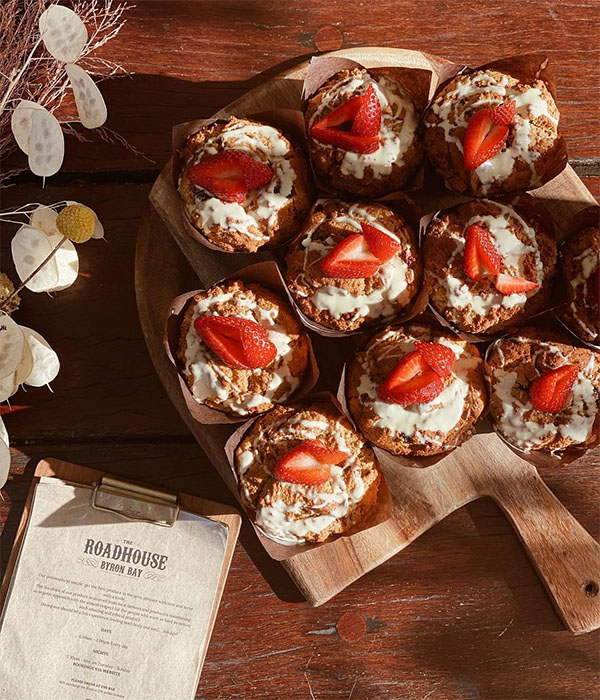 The Roadhouse is a rustic-chic wonderland.

Bayleaf is a marvel on Marvell Street that serves a killer breakfast and lunch. The biggest question at this revitalised local favourite is what to order? Will it be breakfast greens of raw broccoli, shredded kale, avocado, chilli, buckwheat, sunflower seeds, herbs, pistachios and eggs? Or honey-roasted oats with coconut and rhubarb compote? Sit around the communal table in the café housed in a former roastery, which is all beautiful bayleaf green tiles, natural timbers, exposed beams and white-washed walls, or bring your own reusable container and get lunch to go to enjoy on the beachfront. 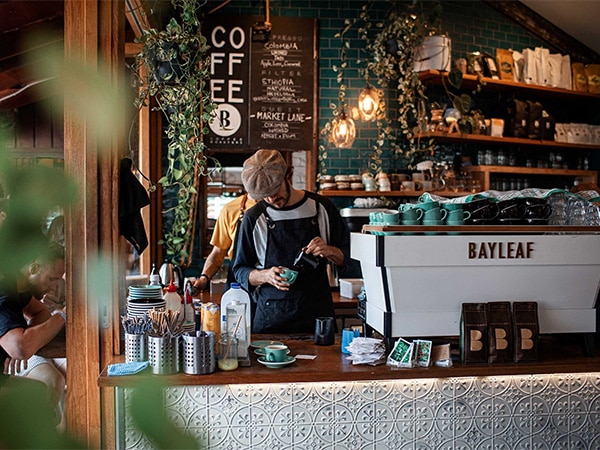 Bayleaf is a marvel on Marvell Street that serves a killer breakfast and lunch.

The Three Blue Ducks’ front-of-mind mission is to ‘grow, feed, educate, give back’ while respecting honest, real ingredients, supporting ethical local growers and embracing the local artisanal food movement. Sit in the rustic farm-style café, located about 8.5 kilometres from Byron Bay, to enjoy roasted pork loin with charred greens, blackened onions, and apple sauce or order a picnic hamper to enjoy on the grounds of the 34-hectare working farm.

Three Blue Ducks’ front-of-mind mission is to ‘grow, feed, educate, give back.

Don’t miss: 7 of the best bars in Byron Bay

Folk is a local bolthole that treats vegetarians as VIPs. It’s also popular with flexitarians who come here to eat and eat well. Our favourites at the garden café tacked onto a caravan park, where tree stumps serve as stools and railway sleepers define the veggie patch, include the smashed avo on organic sourdough (of course) with house-made dukkah, garden greens and toasted seeds or the Folk burrito with spiced biodynamic brown rice and quinoa with organic black beans, spiced kraut and cumin-roasted pumpkin. Meat schmeat. 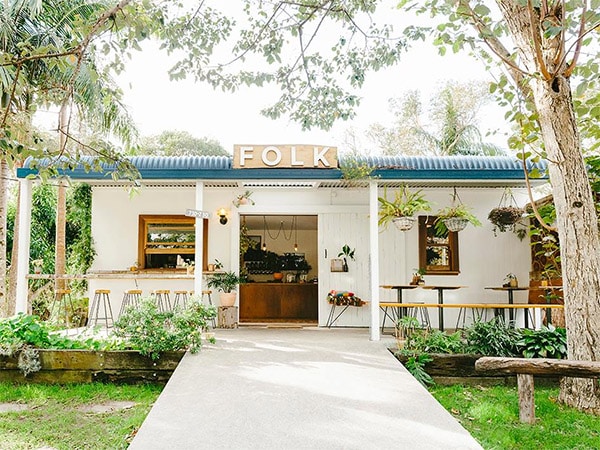 Folk is a local bolthole that treats vegetarians as VIPs.

The Byron Bay General Store is a local institution, proudly serving locals and travellers since 1947 in one of the Shire’s oldest commercial buildings. Gather in the earthy eatery, which was once home to Greys Store, Craig’s Store and Macs Milk Bar, to eat and drink and stock up on local goods that includes everything from gourmet granola to cold-pressed juices. Feel better about yourself and order the brekkie bowl of mixed grains, roasted sweet potato, grilled tomatoes, roasted mushroom and sprouted salad with sauerkraut. 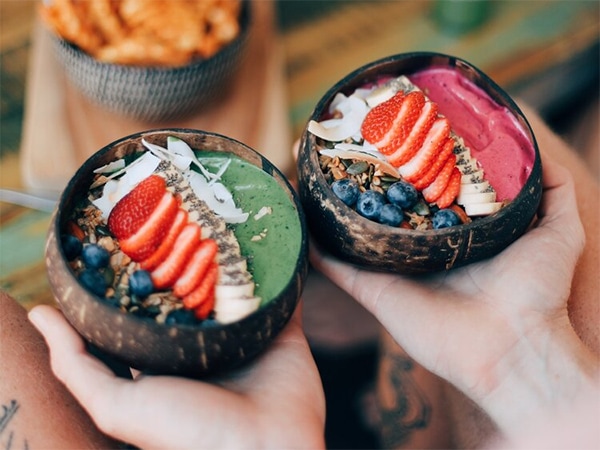 The Byron Bay General Store is a local institution.

There’s palpable excitement at Dip, tucked into a modest Art Deco place where the food does all the talking (with a French accent, of course). Locals come here specifically to have a break from all those kale smoothies and to indulge in decadent options such as buttery French pastries served with mixed berry jam, savoury crepes and buttermilk pancakes. Dip originally opened in Bondi in 1994 and moved to Byron in 2010 where owner Jean Francois Cozic, who has French heritage, still has followers who will travel the east coast for the croque madame filled with ham and Swiss cheese with a poached egg smothered in béchamel sauce. 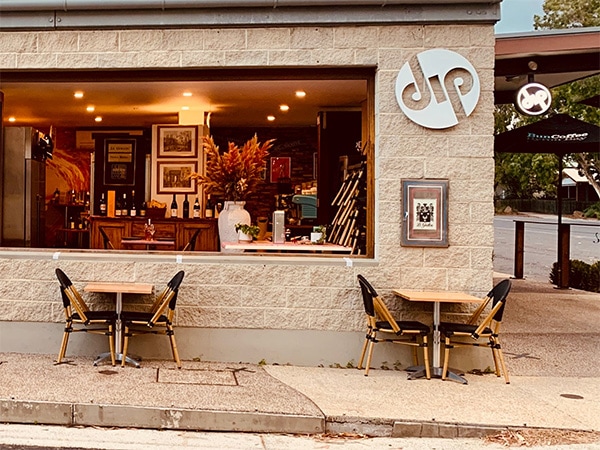 Dip is tucked into a modest Art Deco place. 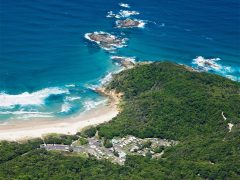 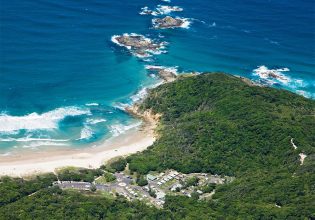 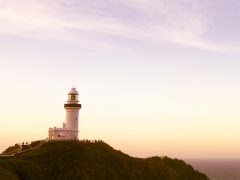 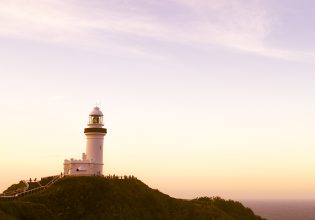 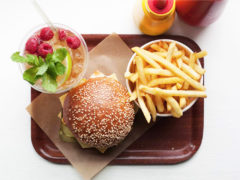 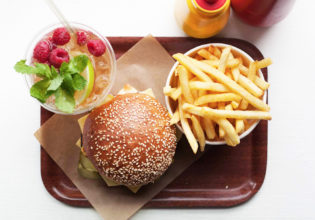