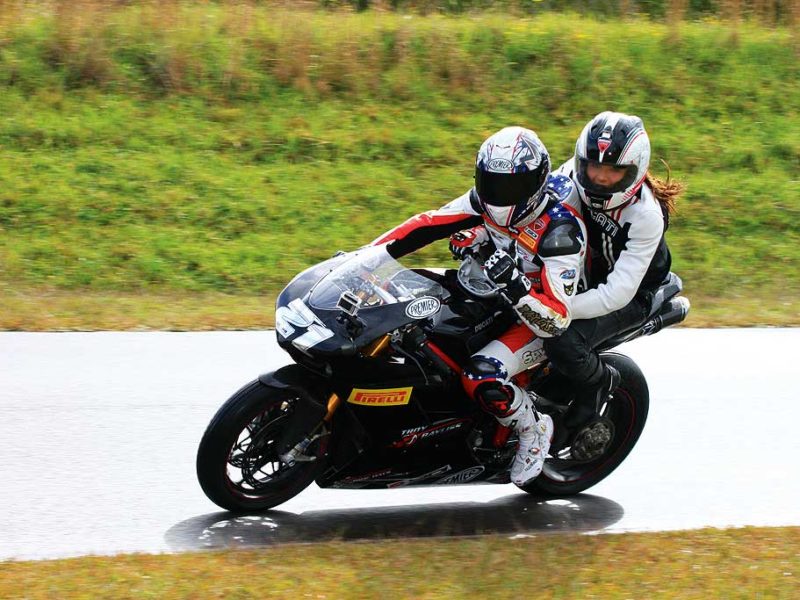 Troy Bayliss and Zoe Naylor going round the track

Zoe Naylor hangs on for dear life as she hurtles round the track on the back of a bike ridden by a World Superbike champion. And so can you.

I have been riding my Ducati 696 for about two years, but I’m far from being a speed demon – nor do I claim to know much about motorcycles.

When the opportunity came up to participate in the Troy Bayliss Experience, a motorbike activity day hosted by Troy himself and launched on June 1 this year, I didn’t even know who he was. I’d heard of Casey Stoner, but apart from the odd glimpse of motorcycle racing on the evening news I had never watched a MotoGP or Superbike race. In case you are as ignorant as I am about motorsport stars, Troy is a three-time World Superbike champion. Doh!

The day offers the opportunity to ride your own or a borrowed bike on a track alongside Troy, and for an additional $295 you can ride pillion as he takes you on a virtual race lap.
Now I am no shrinking violet when it comes to adventure sports. I love to ski and surf. I’ve skydived, bungee-jumped, been whitewater rafting and horse riding through the Snowy Mountains. I am, however, an abnormally anxious passenger. Speed frightens me. As a motorcyclist I behave like a car driver. There is no traffic weaving or high-speed take-offs. In fact, around most corners I’m unlikely to go faster than 20km/h, which can be frustrating for traffic behind me – sorry! Moreover, prior to this experience, I’d never been on the back of someone else’s motorcycle. My one and only pillion experience was on a scooter, and that was quite enough, thanks.

The Troy Bayliss Experience is held at a privately owned facility about an hour north of Sydney, not far from Peats Ridge. The secret location added a wonderful sense of excitement and an extra level of anticipation to the day.

As I pulled into the “The Farm”, I was impressed by the set-up. It was like having an access-all-areas pass to the Grand Prix. Troy’s past racing suits lined the perimeter and the bikes were prepared for the track before your eyes.

On the morning of the ride, anxiety pulsated through my body. As my boyfriend will attest, when I’m nervous my voice tends to rise four octaves and I talk three times faster without listening to anything that’s being said. I greeted everybody in a high-pitched peep and shuffled off in search of a comforting cup of tea.

After my third visit to the bathroom, it was my turn. With a glint in his eye and a laconic delivery, Troy’s only instruction was to push against the specially installed passenger handlebars to stop myself from collapsing on top of him when he braked hard, and to hang on while he was doing wheelies down the straight. WHAT THE?!!!

My heart rate immediately spiked and any remaining shred of bravado flew out of my body in a nanosecond. It didn’t help my confidence that I felt like an Amazon woman standing next to Troy, who is about 174cm to my 178 and has quite a slender frame. How on earth was that going to work?

And so after my hand struggled to sign the waiver forms, I donned my leathers and climbed on the back of Troy’s signature 1198S Ducati. I put my feet up on the pegs and took hold of the passenger handlebar so tightly I was certain they’d need a crowbar to pry my hands off.

On the first lap, I thought I was going to die. We reached speeds of around 200km/h down the straight – apparently he was taking it easy because it was wet!

I’ve never felt a bike lean so far over around a corner. And the first time I felt that front tyre lift off the tarmac, I truly thought I was done. I don’t think I took one breath around that first lap of the five-kilometre track.

By the third and final lap, I’d mustered a sprinkle more confidence. I was able to lean more with Troy into the corners and even let out small bursts of air, which mostly contained expletives.

But I couldn’t possibly have held on for another lap. It wasn’t so much the sheer terror I was experiencing, because ironically it was exhilarating at the same time. The grip of terror had fatigued my forearms to a point where I could no longer hold on.

As soon as we pulled back into the pit stop I literally collapsed off the bike and burst into tears. I haven’t cried at an adrenaline activity since riding my first rollercoaster at Seaworld at the age of 10.

The entire experience was overwhelming. It was an awesome combination of sheer terror and total exhilaration. Getting on the back of that bike was like nothing I have ever experienced. After a big, reassuring hug from my boyfriend, a delicious home-cooked lunch (included in the cost of the day), and a feedback session with Troy, I finally felt myself returning to my body. THE AT Verdict

Zoe Naylor, who paid her own way and visited anonymously, says:

“Whether you are a motorcycle enthusiast or not, I believe that any adult would be hard pressed to find an experience that could match doing laps with Troy Bayliss as a pillion passenger. If you are an adrenaline junkie, this will test your limits. If you are a rider it is a brilliant way to improve your own riding skills. But most importantly it will give you a unique insight into this FULL-ON sport. These guys are true athletes. I thought we were going fast at 200km/h, but that is a Sunday drive compared to their usual speeds of over 300km/h. How these guys maintain that speed, concentration and stamina defies logic. This is without a doubt the opportunity of a lifetime – add it to your bucket list!”

Where:  “The Farm”: a secret, privately owned facility near Peats Ridge, NSW.

Notes:  $1295 per person when held on the private property, due to a maximum of 12 participants and the one-on-one experience with Troy. See the website for more affordable options held at racetracks around the country (from $795).

Flora King soars through the canopies and gets back to her evolutionary roots, at Australia’s first treetop adventure park (more…)...