A Detours and Diversions piece about the Clog Barn in Coffs Harbour, NSW

In a country with such an obvious European heritage, it’s only natural that some things will have come over to Australia with the earliest settlers and been preserved. Some of these are obvious: English is the dominant tongue, and just about every town in Australia has an Irish pub, Italian restaurant and Greek kebab house. However, every now and again you come across a glorious little pocket that hasn’t tried to blend into the multicultural surrounds, and is instead absolutely determined to retain the characteristics of the motherland.

For no discernable reason, completely at odds with the surrounding towns, you can stumble upon Oompah bands in German villages in the Adelaide Hills, or Spanish monastic communities an hour’s drive from Perth. Deserving a special mention for sheer bloody-mindedness, however, is Little Holland near Coffs Harbour. Clearly unable to persuade the rest of the region that they should build cannabis cafes, stick their fingers in dykes and revel in red light districts, proud Dutchman Tom Hartsuyker has cornered off his own piece of (flat) land, and has filled it with every other Dutch stereotype he can think of.

The result is a 1/20 scale model village built over five looooong years, and it is a work of truly breathtaking pointlessness. Still, if making miniature windmills keeps Hartsuyker out of trouble and off the streets, then fair play to him.

And just in case that’s not quite Dutch enough, Little Holland is attached to a Clog Barn. Happily ignoring the fact that no-one, even in Holland, has worn clogs for roughly 200 years, they’re on sale here. At 11am and 4pm every day, there are clog-making demonstrations. Again, they’re strangely endearing, even if everyone is looking at each other, sniggering behind their hands and scratching their heads.

The Clog Barn, Big Oma’s Coffee House and Little Holland ([02] 6652 4633 or www.clogbiz.com) are on the north side of Coffs Harbour at 215 Pacific Hwy. Entry to the Clog Barn and the demonstrations are free, but you’ll have to fork out $4.50 (adults) and $3 (kids) to see the model village and railway. 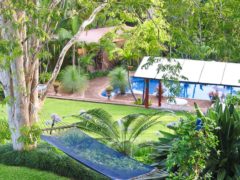 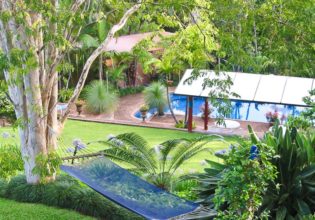