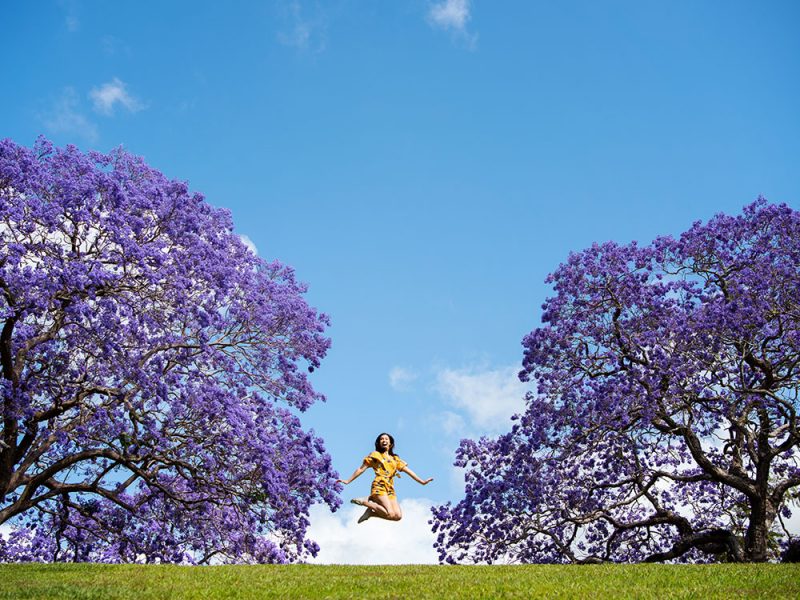 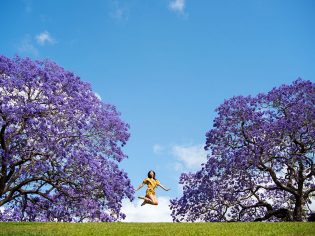 Japan has its world-famous Sakura cherry blossom festival, but here in NSW on the far north coast we have something even better. 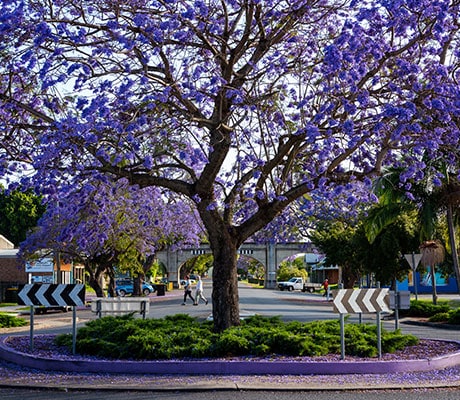 With more than 1700 Jacaranda trees planted, you will find the purple rain in most of Graftons streets

While the Japanese go crazy for blossoms that last only a few days at best, Grafton’s jacaranda season paints the town purple for the best part of a month. Even better, the locals – who, since 1934, have been celebrating the lusciously lilac-coloured blooms every year in spring with a whimsical and delightfully retro festival – know how to have fun. If you’re looking for a sure-fire way to banish the lockdown blues, go mauve.

Why Grafton’s jacaranda season is unique

One of the things that makes the Grafton Jacaranda season such a special event is that it’s all about the trees, which means they decide when the show begins (although all the signs this year seem to indicate that the official season will be from 21 October to 11 November). 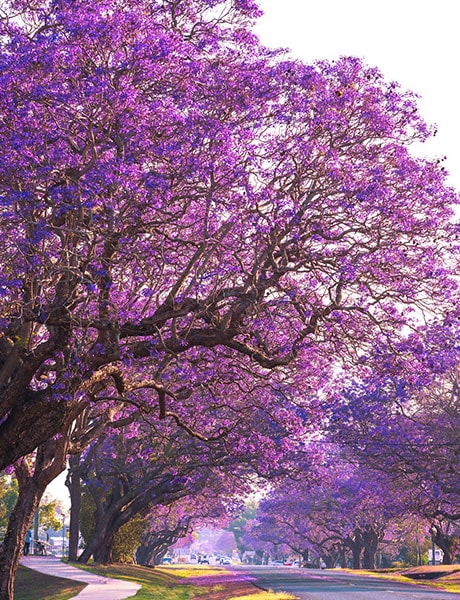 The purple blossoms start to show themselves in early-to-mid October.

Mother Nature has the final say, of course, but usually the first blossoms start to show in early to mid-October and are in full bloom in the second half of the month. By November, Grafton’s streets are carpeted in fallen purple flowers. The brand new Illuminate event in See Park runs after dark on various evenings between Friday 22 October and Friday 12 November, lighting up the trees from 7.30pm. 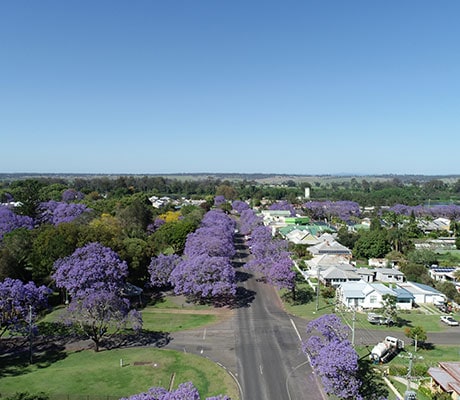 The trees make the town in Grafton.

If renowned painter Claude Monet had a bucket list you can bet Grafton would have been on it. Walking through the tunnels of purple-painted trees is the closest thing you’ll ever experience to stepping inside one of his beautiful impressionist paintings, and it’s all just crying out to be captured with a camera. If you’re lucky enough to be under a jacaranda when there’s a breeze blowing it’s like being showered with purple rain. Whatever time of day, you’re guaranteed to get some pretty awesome shots.

How to catch the purple haze 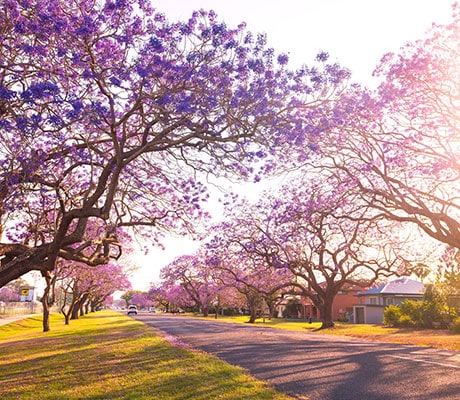 It’s like a purple rain shower when the wind starts blowing and the leaves would start falling.

You’ll find jacarandas on almost every corner in Grafton – there are more than 1700 of the trees in town – but for maximum purple exposure, and perfect photo spots, stroll along Pound St, past Market Square, the Clock Tower (you can’t miss it, it’s decorated with a huge crown of lights to celebrate the coming of the flowers, a tradition that dates back to the coronation of Queen Elizabeth II) and the giant fig trees, a splash of green amongst the mauve. 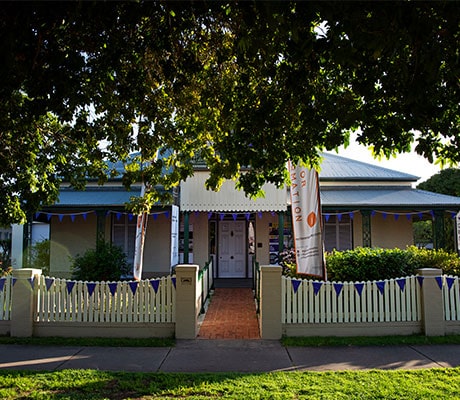 Make a point of dropping in on the Grafton Regional Gallery and snap a selfie in front of the gallery’s most popular art works – the purple (of course) Grafton Chair.

The regional art gallery in heritage-listed Prentice House is on Fitzroy Street, which is worth a look (snap a selfie on the famous giant purple Grafton Chair, one of the gallery’s most popular works of art), as is the Schaeffer House Museum, full of fascinating local history. Turn right when you get to Turf Street and follow the violet carpet until you hit Dobie St, then keep going  until you hit Prince Street (if you’re not humming his Purple Rain already you soon will be) and follow the flowers back to the Clock Tower. Don’t worry about trying to memorise directions because there’s a handy jacaranda map  that pinpoints the best photo ops along the way. 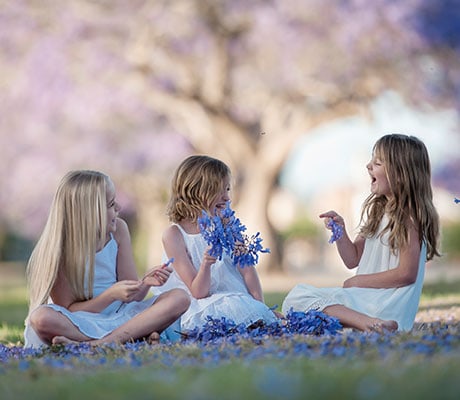 Everyone loves the purple flowers.

2021 is the year to tick it off your bucket list 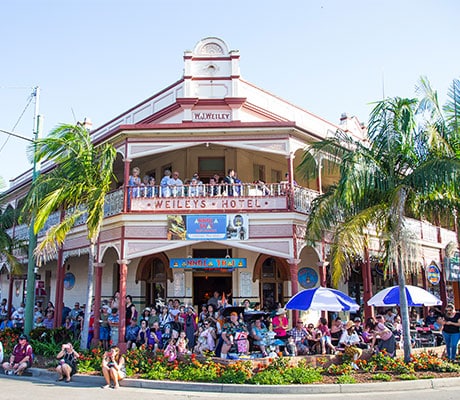 Prince Street, Grafton is the place to be for the annual Jacaranda Festival float parade. (Image: Destination NSW)

While the city shimmers in a purple haze for the best part of a month, things really get colourful during the 10 days of the Jacaranda Festival. The frivolities kick off with dancing in Market Square on Friday 29 October, and keep going until Sunday 7 November. Highlights include the Grand Parade and crowning of the Jacaranda Queen on Saturday 6 November, but there are also markets, concerts, musicals, comedy shows, long lunches, afternoon teas, cocktail parties, special dinners, art exhibitions, garden tours, a thrill ride and carnival, hot air balloon flights, and all sorts of cultural events. 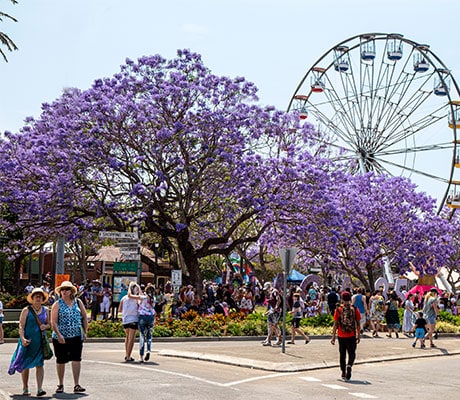 The Jacaranda Festival brings a new level of purple daze to Grafton with the street parade, cocktail parties, carnival rides and side shows plus loads more.

Everyone in town, including all the shops, gets into the spirit of things by dressing up in their finest purple gear, particularly on Jacaranda Thursday, where the donning of purple leis is a thing. Even the food puts on a purple show: special treats to try include plum-tinted ice cream and the Festival Punch Purple Lemonade.

Green beyond the mauve

Should you be looking to expand your coloured horizons, take a stroll down Breimba Street beneath an arch of giant fig trees so special they are listed by the National Trust, or head a little further afield into the World Heritage-listed rainforest of Iluka. See the shipwreck of Australia’s only train ferry on the Grafton Bridge Walk, paddle a kayak to Susan Island in the middle of the Clarence River for more rainforest, or hit the surf in Yamba and tuck into some of the world’s best prawns while you’re there. Back in Grafton, take a trip down memory lane walking (or cycling) the heritage trail – check out the marvellous cathedral and the imposing gaol – and stroll down South Grafton’s charmingly retro main street. Historic hotels, all iron lace and deep shady verandas, offer the perfect vantage point for an hour or two of people watching, which beats a Netflix binge for entertainment any day. 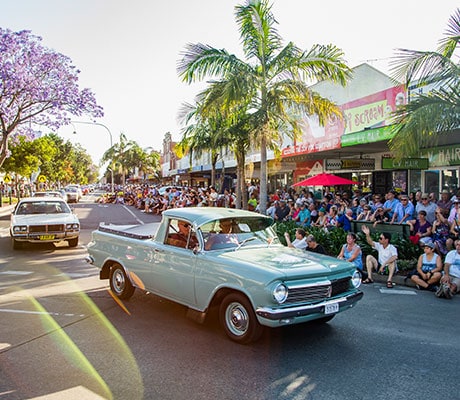 It’s all about slowing down, taking time to smell the flowers, relaxing with a cool drink – or a good book – in the shade, and soaking up the sunshine with a picnic lunch. Spring time in Grafton is a dreamy reminder that the world really is still a wonderful place. 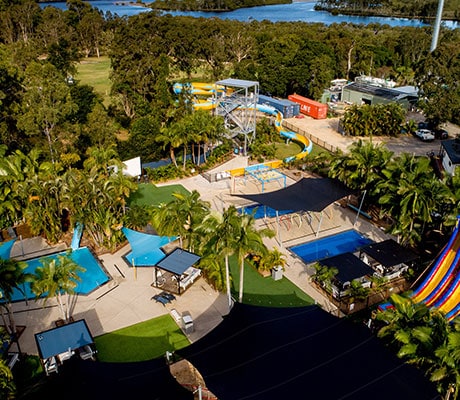 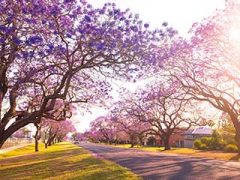 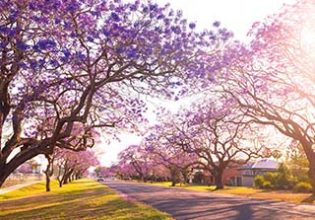 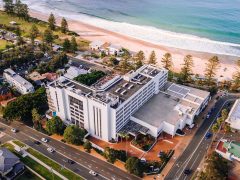 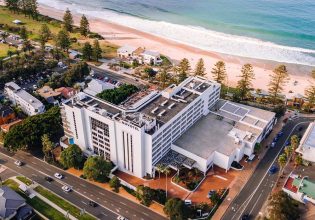 Wollongong accommodation to suit every traveller

From glamping getaways to hotels with all the mod cons and cute-as-a-button cabins, here are some of the best Wollongong accommodation options. Wheth... 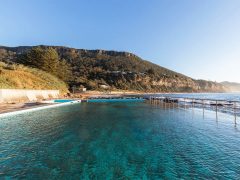 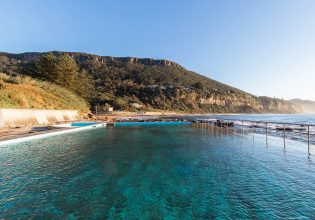 Wollongong is awash with places to swim, making it one of NSW’s greatest seaside cities. From sun- drenched sea pools, to low-tide treasures and lo... 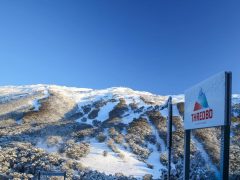 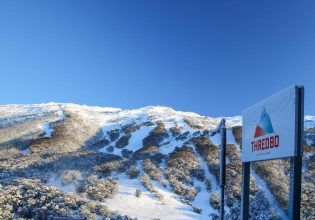 Top 10 things to do in Thredbo

Come spring, summer, autumn, or winter, Thredbo is activity central – get out into the great outdoors and try one of these 10 adventurous pursuits o... 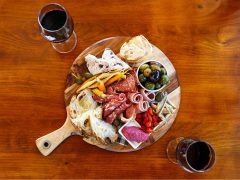 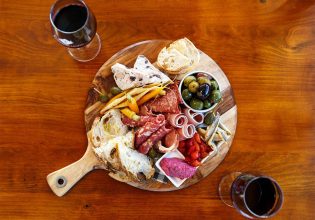 The best places to eat and drink in Thredbo

Enjoy a smattering of stellar bars, restaurants, bakeries and bistros in tiny Thredbo. From the on-mountain hut serving up gourmet three-course lunch... 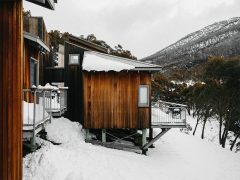 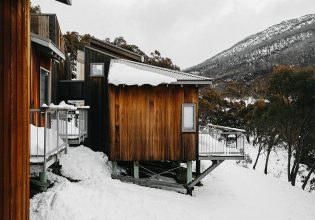 A guide to the best Thredbo accommodation

From scenic bush camps to design-driven Airbnb’s, and modest ski-in ski-out lodges, here’s our pick of the best Thredbo accommodation. An alpine ...