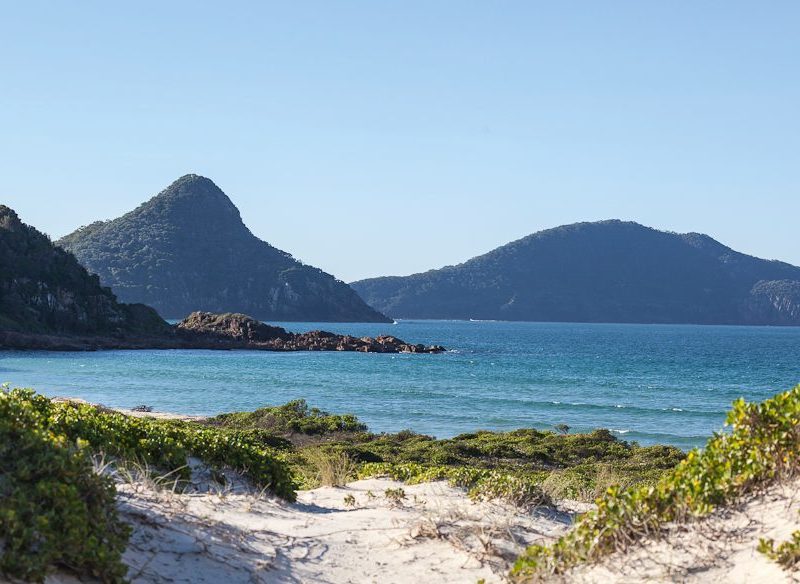 See how Fingal Bay can match Nelson Bay, its more famous Port Stephens neighbour, number 80 on Australian Traveller’s ‘100 amazing places you haven’t been to yet‘. Nominated by Stephen Howard, director of PR at Amalgamated Holdings Limited

Secret holiday spots are especially valuable if they’re within that imaginary two-hour travel circle around a city. Fingal Bay, two hours north of Sydney along the southern coast of Port Stephens, holds its own compared to its more famous neighbour of Nelson Bay, yet feels like you’re well off the beaten track – a rare jewel indeed.

“The thing about Fingal Bay,” says Stephen Howard, the director of public relations for AHL (the hotelier company responsible for the likes of the Art Series and QT hotel chains), “is that it feels like you’re remote but you’re still close to society. You drive through bushland to get there.”

“People say good morning on their morning walks and walk barefoot everywhere, sometimes even to dinner. There are still lots of old beach shacks, and the beach has a great little left to right break at its southern end.”

Don’t let this humble description fool you though; Fingal Bay has the goods. “The beach was included in Brad Farmer’s book on the top 101 beaches of Australia,” Howard admits. (And there are 10,685 beaches around the country, according to the Coastal Studies Unit at the University of Sydney, so that’s saying something.)

Port Stephens’ famous dolphins pass straight through Fingal Bay, making them a year-round feature, and you can watch their antics while you eat real, traditional fish and chips, wrapped in paper from the shop in town.

“The water is crystal-clear,” says Howard. “You can go out on a boat, or just off the pier at Shoal Bay. Or you can fish directly off the beach at Fingal Bay and collect pipis off the beach as well. At low tide you can walk across the sand bank to Shark Island, which has some old ruins of the lighthouse keepers’ quarters on it.”

Being five minutes away from the tourist hub of Nelson Bay, too, means that the best of local attractions are available when you’re up for some fun. Go snail’s pace or hell-for-leather at Toboggan Hill Park or grab some just-off-the-boat lunch at the fresh seafood co-op.

The local golf course is a 27-hole championship course and one of the best public courses in Australia (nelsonbaygolf.com), says Howard. “There are kangaroos and kookaburras all over the course, just running wild.”

Meanwhile, in Fingal Bay itself there’s a new little café next to the surf lifesaving club, overlooking that pretty beach, and a new restaurant right inside the club too (“very exciting stuff,” Howard observes with a grin).

He suggests you sit on the deck and watch the sun set over the beach while you indulge in a cheap beer or two. “And if you really want to get fancy,” he adds, “you can put shoes on.” Sounds like heaven to us.

A visitor’s guide to Port Stephens

In any other country Port Stephens would be a national icon. But here in Australia, the gorgeous bay and its beaches with thousands of things to do f...

When you think of eating out in Port Stephens, it has traditionally been beachside fish and chips that comes to mind. But now there are plenty of alte...

Where to find adventure in Port Stephens

From surfing sand dunes to hiking up coastal headlands, Port Stephens, in New South Wales, has adventure in spades. Here are our five favourite activi...

Natalie Bray dips into one of the best hotel pools in Oz - at Oaks Pacific Blue in Port Stephens, NSW. Let’s get straight to the point. I judge...