1. Sydney to the Blue Mountains

Not for nothing have the Blue Mountains been a popular weekend holiday destination for Sydneysiders for more than a century. Today, spectacular cliff-top lookouts, bushwalks and outdoor activities continue to lift the spirits of frequently visiting nature-starved city dwellers. Cruise to Leura for a tasty lunch (or brunch), then mosey about the local arts and craft stores. Having admired the famous Three Sisters at neighbouring Katoomba, the adventurous among you might consider jumping off the edge – abseiling is a popular activity here. For others, a ride on the Scenic Skyway then down the Scenic Railway or Scenic Cableway to Jamison Valley’s World Heritage-Listed rainforest floor for a brief or extended bushwalk will probably suffice.

Those names should say it all: this place is scenic. But should you want more, check out ancient Aboriginal art in the Wall Caves at Blackheath. The Jenolan Caves, an hour south of Lithgow, are also a classic must-do; the curvy, quirky shapes of their water-woven limestone formations reveal nature’s role as an accomplished experimental artist.

Govett’s Leap, one of the best lookout points in the Blue Mountains, was either named for a desperate bushranger who rode his horse over the edge rather than be captured, or for an English surveyor named William Romaine Govett. We know which story we prefer.

A leisurely 400km from Sydney, where the Hastings and Camden Haven Rivers meet the Pacific, the many beaches and idyllic setting of the mid north coast town of Port Macquarie is a popular destination for surfers and tourists alike.

Walk along the river mouth, right in the heart of town, to get a first-class view of the sun rising over the ocean or setting towards the hinterland. Venture towards the Great Dividing Range into gently undulating pastoral country for some more spectacular scenery, including stunning views from the Comboyne Plateau or on hikes in the Boorgana Nature Reserve. On the drive up from Sydney, stop at Nelson Bay. The town’s sheltered beaches are gret for a spot of swimming and a little hike to the Gan Gaan lookout or Tomaree National Park will help work up an appetite for local dining options. Hire a snorkel, mask and pair of flippers and explore the Fly Point Aquatic Reserve where you can happily handfeed blue gropers.

If you have a little more time, jump on a boat to Broughton Island. Its surrounding reefs, teeming with marine life, are famous for snapper, drummer, kingfish, flathead and groper and divers can check out underwater caves – as well as a split called the Looking Glass, which runs the length of the island.

Broughton Island was marked as Baye Perdue (Lost Bay) on an early French map, which some historians believe was copied from a Portuguese original showing the first discovery of a southern landmass around the 16th Century called Java La Grande – or, as we know it, Australia.

Stay at one of the many boutique B&Bs while you explore the several heritage-listed buildings scattered around town, some built as far back as the 1850s, or go stargazing at the Mudgee Observatory.

Rejuvenate yourself with a nice cold beer freshly brewed on location at the Mudgee Beer Brewery before exploring the region’s nearby national parks and nature reserves. Then go on a tour of the local wineries and treat yourself to the gourmet food at local restaurants, all of which use fresh produce from the region. Head to the historic outer western suburb of Windsor, the fertile flats of which were supplying fresh produce to Sydney from as early as 1794. Then get on the Bells of Line road, heading west, stopping as whim dictates at fruit stalls, galleries, craft and antique shops – all while admiring wonderful views of the rugged Grose Valley.

Flora enthusiasts should stop at Mt Tomah Cold Climate Botanic Garden for a geographically grouped world tour of the planet’s most interesting and attractive cold-climate botany.

From Mudgee, head 1.5hrs west to Wellington for its wonderful caves, the Cameron Parks gardens, horse riding on pastoral properties, tourist farms, galleries, historic buildings and… a house made from more than 9000 wine bottles (someone was drinking excessively).

Further west still in Dubbo, critters of all kinds roam freely in their natural habitat at the award-winning Taronga Western Plains Zoo in Dubbo. If you can, time your Zoofari visit for spring when there are usually a few newborns to cuddle. Flooded street in the outback at Dubbo Australia.

Jervis Bay, an easy 2.5hr drive (195km) from Sydney, well known for its clear waters and white sand, is greatly loved by water sports enthusiasts. Windsurfing, fishing and diving are just some of the things to do here, but many find themselves satisfied with a simple walk along one of the bay’s secluded beaches. It’s also home to dolphins, so keep your eyes peeled. On land, you’ll also have the opportunity to engage in a little wine tasting. 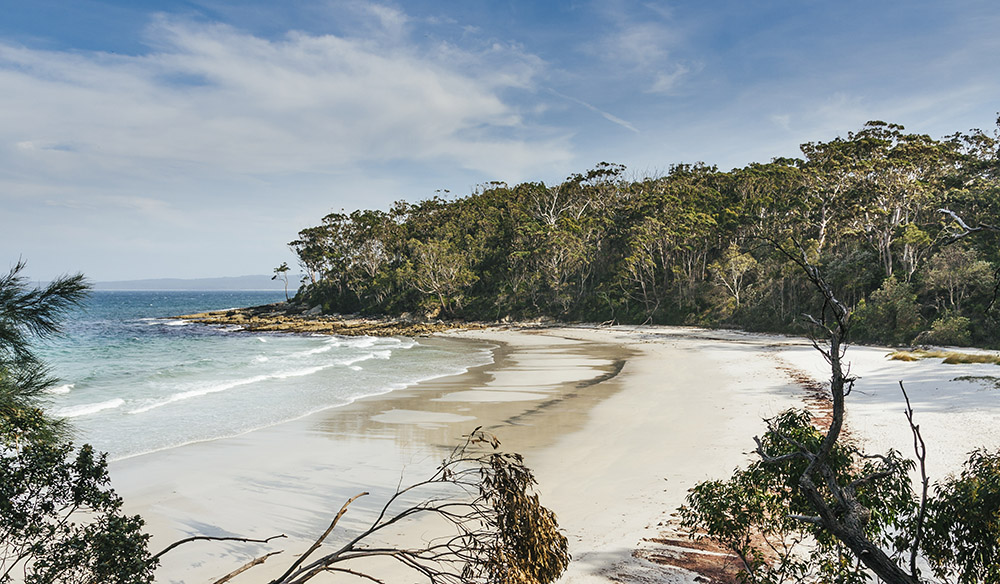 One of the many beautiful white sand coves at Jervis Bay

Begin the Grand Pacific Drive with an extreme adventure at Bald Hill on Stanwell Tops, which has become a hang gliding and paragliding Mecca. A further 15min on is the old coalmining town of Bulli, with picturesque views of the NSW coastline at Sublime Point.

Stop at Wollongong for a quick feed at The Yallah Woolshed, an Australian country theme restaurant where you can sneak in a barn dance should the urge take you. Stay overnight at Shellharbour before stopping by for a quick look at the famous Blowhole in Kiama.

Cool down with a dip at Gerringong’s Seven Mile Beach, then head inland to beautiful Berry, a refreshing change from the city life’s bustle, where you can browse their many boutique stores.

Further south is dotted with plenty of pretty seaside villages to explore, Ulladulla, Mollymook and Burrill Lake being particularly attractive. In 1889, Charles Jackson, a performer, successfully crossed the mouth of the Blowhole in Kiama on a tightrope.

A pleasing combination of the old and the new, Canberra and surrounds, despite suffering in the past from a slightly staid reputation, really do have a huge amount going for them – you just have to know where to look. Appreciate this meticulously planned city’s seemingly endless circular symmetries from the skies in a hot air balloon, then check out one or two of the many acclaimed galleries and museums on offer. Every morning at dawn, more than 30 balloons take off from the lawns in front of the Old Parliament House.

Wine is definitely the biggest selling point of Capital Country. The vineyards and rolling hills surrounding Canberra provide the perfect visual accompaniment to the cornucopia of tasty wines and gourmet dining experiences available. Pick up a wineries map at the Canberra and Region Visitors Centre and drive. Be seduced by outstanding examples of Viognier, Shiraz and Riesling at one of more than ten wineries (and counting) in Murrumbateman, a short drive north.

The beautiful Yarrh Wines, 9km east of Murrumbateman, holds food and wine matching on the first Sunday of each month. Head northeast to Gundaroo, a typical 19th Century village with a main street preserved in its original character. Or retrace the drama of Aussie teen flick The Year My Voice Broke in the rugged landscape and pioneering architecture of the film’s location, Braidwood, an hour east of Canberra.

Only 25 minutes northwest of the CBD, Poachers Pantry, including Wily Trout Vineyard and the Smokehouse Cafe, is becoming an institution. To the southwest, the often snow-capped mountains and deep forests of Namadgi National Park provide pleasant walks and drives, while to the west, in Brindabella National Park, the barren limbs of ancient mountains are cloaked in richly coloured scrub and grasslands.

The All Saints Anglican Church on Cowper St in Ainslie, northeast of Parliament House, was once a mortuary railway church on the outskirts of Sydney. It was dismantled and transported to Canberra in 1958, where it was re-erected, stone by stone.