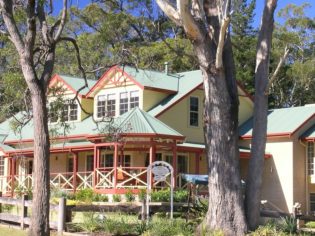 Even with Jervis Bay lying in wait right around the corner, we’re not too busy with summer activities to argue the relative merits of a B&B versus a Guesthouse. And this one’s a beauty.

To the uninitiated, a B&B and a guesthouse are pretty much the same. You pay to stay in someone else’s house. That’s what I thought, anyway. Not so, according to Alan Burrows, who, with his wife Christine, runs Sandholme Guesthouse at Huskisson on the NSW South Coast. A B&B, says Alan, is just a private house with a few spare rooms for rent. A guesthouse, on the other hand, is purpose built to accommodate travellers and tourists in unique style and comfort.

Sandholme is certainly unique. Built in 2000 on a large block of land owned by Christine’s family since the 1950s, this federation-style building recalls the grand old guesthouses of Husky’s past. Back in the late 1800s and early 19th Century, guesthouses were about the only options available. Sadly, those classic colonial buildings are gone now, knocked down to make way for blocks of flats or motels.

The Burrows chucked in corporate lifestyles to reinvent themselves as purveyors of fine lodgings in the traditional style. They’ve spared no expense in designing and building a comfortable and well-appointed guesthouse which is close to Husky’s cafes and restaurants and also a short (four minutes, according to Alan) stroll to the beach.

My wife Melinda and I stayed at Sandholme midweek. Arriving on a chilly afternoon, we were greeted by smiles from Christine and the sounds of light sabres and blasters. Another couple had booked in especially to watch the latest Star Wars DVDs in the in-house theatre, complete with surround sound and enormous screen. Being something of a sci-fi fan, I found it hard to concentrate as Christine and Alan showed us around. In between trying to watch the battle between Vader and Skywalker (“I am your father”, “Noooo!”), I noticed a pool table, comfy chairs, conference centre facilities, bookshelves loaded with novels and DVDs, interesting artwork, a gym, a huge stainless steel commercial grade kitchen, a dining room and a formal lounge.

Upstairs are four rooms (another is located on the ground floor) and all are individually themed; we stayed in “Dolphin’s Playground” while the lucky Star Wars freaks had the “Lover’s Playground”. The rooms are based around what you’d expect in a classy boutique hotel. Spotlessly clean, king sized bed, fluffy white towels and robes, TV, bar fridge, real tea and coffee . . . it was all very nice. The bathroom featured a big spa bath which Mel, six months pregnant with our third child, declared as the best spa she’s ever been in.

After dinner of pizza and a bottle of shiraz (all for me – one of the few benefits of having a pregnant wife) at the local Italian restaurant, it was back to Sandholme for a game of pool (we won) and a chat with Alan and other guests before climbing into that big, warm bed. Guests can request DVDs to be routed to their rooms – I was quite happy watching The Empire Strikes Back, but Mel, who’s not a Star Wars fan, snuggled into the pillows and doona and fell asleep.

Next morning we woke late, wandered downstairs for eggs, bacon and toast cooked by Alan in his impressive kitchen (dinner and lunch are also an option) and relaxed over a cup of excellent espresso (again made by Alan, a qualified barista).

Apart from couples who want to enjoy some time together, Sandholme is set up for businesses or groups to hold strategic or planning retreats and would also be a unique venue for a small wedding. For Mel and I, it was good to escape the real world, even if only for a night. 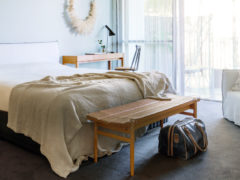 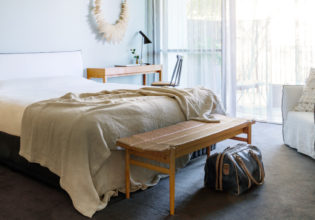