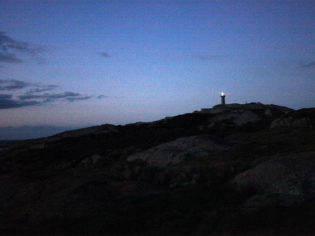 1000 seals, 127 years of history and an inclusion in the NSW Tourism’s Hall of Fame and yet, few people have heard of Montague Island. Solveig Walkling visited the wildlife sanctuary to find out why.

Silver strings of pearls are swirling through the water all around me and up to the surface. Beneath me the air bubble blowing seals dive down among stingrays and Port Jackson Sharks into the ocean’s depth only 9 kms off the NSW South Coast.

Then, suddenly, one of them shoots back up and straight towards me bearing his teeth. Mark Westwood, our National Parks and Wildlife Service Ranger onboard the boat from Narooma to Montague Island had warned us that the seals were part of an all male colony and liked to play with visitors by changing direction at the last second. True to Mark’s prediction my furry friend shoots straight towards me, mouth opened to reveal his sharp teeth, and shoots off to my right when I can almost count his whiskers. I’m not normally of a nervous disposition but after countless (and escalating) pirouettes with the seal, I eventually start to worry that he might forget to change direction or accidentally take a little friendly nibble. Sure, it wouldn’t be as bad as a shark’s playful bite but I gingerly swim towards the rest of our group nevertheless.

There’s safety in numbers. And I have ventured a little far away from the boat and island anyhow – again true to our guide’s prediction who warned us that the seals liked to entice visitors and lure them away out to sea. Your average teeth-bearing friendly mermaid.

Baranguba, as the Aborigines called the island near the edge of the continental shelf, is an enchanting place to visit. The wind blows through scrubs, over towering rocks and past sacred Aboriginal sites and headkeepers’ graves, through the deep chasm dividing the island and up to the towering lighthouse that looks as if it’s grown straight out of the rock. Montague conjures up memories of the wild Cornish Coast and its colourful history as an isolated home to the lighthouse keepers and their families adds to the romanticism. The cry of sea eagles and the sounds of crashing waves and a hint of wind-blown clouds in the blue sky complete the picture.

Up near the lighthouse, visitors walk past an imposing granite boulder the size of a three-story house. It’s missing a huge chunk and looks as if some passing giant decided to just break a piece out of a grey oversized loaf of bread. The granite was used as bricks for the lighthouse tower’s construction in the 1870s. Tucked away behind the huge boulder are the lighthouse keepers’ cottages. Simple white buildings with blue trimmings and grey roofs, they complement the natural surroundings and house overnight visitors during their stay. Setting foot through the door, you feel as if first headkeeper Captain John Burgess might come around the corner anytime soon to extend a warm welcome. Gazing at the ocean through the large window front of the sitting room, curled up on a sofa or armchair, you can almost hear faint piano music in the distance, if you listen carefully; this is where Burgess’ wife Isabella used to play to entertain the families in the evenings. On one occasion, a music-loving penguin is said to have waddled in and stood beside Burgess, enchanted by Isabella’s music.

Before mobile phones, internet and foxtel, evenings on Montague Island were spent in the company of your family and co-workers, and today’s visitors quickly adapt to the change of pace. Only 9kms from the mainland, the wildlife sanctuary’s beauty relaxes visitors instantly. Plenty of board games are stocked in the cottages for long sleepless nights or during a gale. All meals are prepared by visitors themselves and the two-day trip becomes a bonding exercise in no time. Our group quickly develops a rhythm of cooking together. With barely any interruptions and surrounded by nature, people are inspired to talk about life in general and after a few bottles of wine long-standing philosophical problems are solved.

An existence on an island off the coast might seem like a romantic ideal. The isolation and quiet might inspire us to relax and bond but that was not always the case in the former residents’ day. “You have to live apart a bit so you won’t go mad. It’s an unwritten rule of lighthouses,” one said. Apart from the occasional visitor and even rarer trips to the mainland, they relied on each other and the help of passing boats in an emergency. An upside down flag was raised as a distress signal in times of need. The first headkeeper lost two young children – not unusual in those times but a heartbreaking story when you imagine how they were waiting for help in vain in a major swell, their signal going unnoticed by several passing ships. (Despite their grief the Burgess became one of the longest lasting keeper’s family.) The mainland could be reached by rowing boat, if necessary – not a mean feat across 9 kms of open ocean and through the breakers into Narooma. The isolation drove residents to extreme measures at times. Since keepers weren’t allowed a personal motorboat, they apparently used some sort of sail to get their rowing boat across the open ocean and bar to the pub in Narooma and – drunk – hitched a ride back to Montague being towed by another boat. While the keepers’ families usually formed a close working relationship, it wasn’t always easy, like, for example, on one occasion when a keeper got involved with the other’s wife or when another pair of families fell out and only spoke to one another over the internal phone system for a period of three months. “You can get lonely at times, but you can also get lonely in the big city,” mused one headkeeper.

Work was what kept them sane. During the keepers’ days, hard work wasn’t only limited to overseeing the functioning of the oil-lit beam of light. Day-time on Montague Island involved hard labour to keep people occupied. The lighthouse, cottages and vegetable garden needed to be tended and animals, like goats, horses and chickens looked after. Not much has changed today. The island was declared a wildlife sanctuary in 1953, became the first property to be added to the NSW National Trust’s portfolio and has housed various researchers throughout the years. Visitors also become actively involved in conserving the pristine environment. They weed, plant and help survey the wildlife.

Walking the 80 hectares of Montague, guests follow the former horse cart trails that have now become “penguin highways”.  They provide easy access for the Gator, a small all terrain vehicle that not only carries guests’ backpacks; it also becomes a joyride for Montague personnel and some lucky guests. One of the field officers invites us on a rollercoaster ride down the steepest side of the hill and past a group of open-mouthed day trippers who were investigating the nearby graves. Back on the hill, he laughs. “They used to go a bit crazy from the mercury (used to make the heavy light’s mechanism easier to turn from 1910 onwards) and the isolation back in the day. I don’t need any mercury.”

The Gator also carries our group to a rendezvous with the penguins who make their way up to their burrows at sunset. But we’re unlucky – we had got a little carried away in our dinner preparations – and the only penguins we see are two faint shadows in the distance. That is before we hop onto the Gator for the bumpy ride back. The “penguin highway” is not just a funny nickname, it is actually the route Little Penguins use to return to their homes (including the boxes and decorated little houses provided by NPWS staff),  and one penguin gets the shock of his life as our vehicle’s beams hit it from behind. He turns around bravely to face the Gator before continuing his waddle as fast as his tiny feet will carry him. It’s a comical sight and one of the only glimpses I get of the inhabitants of the world’s second largest Little Penguin colony. It’s molting time during our visit, and apart from standing on a flattened dead penguin accidentally and disturbing a narky-looking one who’s obviously not to happy to spend 16-19 days in a dark, hot box shedding his undercoat, the comical creatures are rather more elusive than the playful seals.

As we wander around the island listening to Mark’s informative and entertaining anecdotes, I begin to understand why kids love Montague. It’s a largely unspoilt paradise where the keepers’ children lived an idyllic existence roaming around freely all day. They spent their days fishing, swimming and exploring to their heart’s content. The only dangers lurked off the island in the deep waters surrounding it. Stories of killer sharks and octopi were used to keep them away from the ocean. In more recent times, they sometimes got to assist the researchers with experiments or surveys. And today, kids and adults visibly love getting amongst it and their hands dirty. One adorable comment in the guestbook by a child called Penny reads: “I putted a plant in a ground.” And most visitors use words like “magical, fantastic and fabulous” to describe their overnight stay. But perhaps the best testimony to Montague’s lure comes from a visiting lighthouse keeper who was stationed on another island: “I wish I had stayed here.”

From a magical view of the sunrise at breakfast over days filled with conservation work, informative talks and refreshing swims to seeing the sunset over the mainland, Montague is well worth a longer visit. There are anecdotes to fill several books about the island and The Lure of Montague by Laurelle  Pacey (available for $30 from Narooma Visitors Centre) is a great read for anyone interested in the enchanting place’s history.

The island’s cottages can be hired out by groups of up to twelve people. 2 nights will set you back $3000, 3 nights $4000 and so on. Individuals and couples are, of course, also welcome for hosted conservation stays. For more info and NPSW guided half day trips, check out nationalparks.nsw.gov.au/visit-a-park/parks/montague-island-nature-reserve

For more information on regional events or accommodation in Narooma, head to www.eurobodalla.com.au or call 1800 240 003.