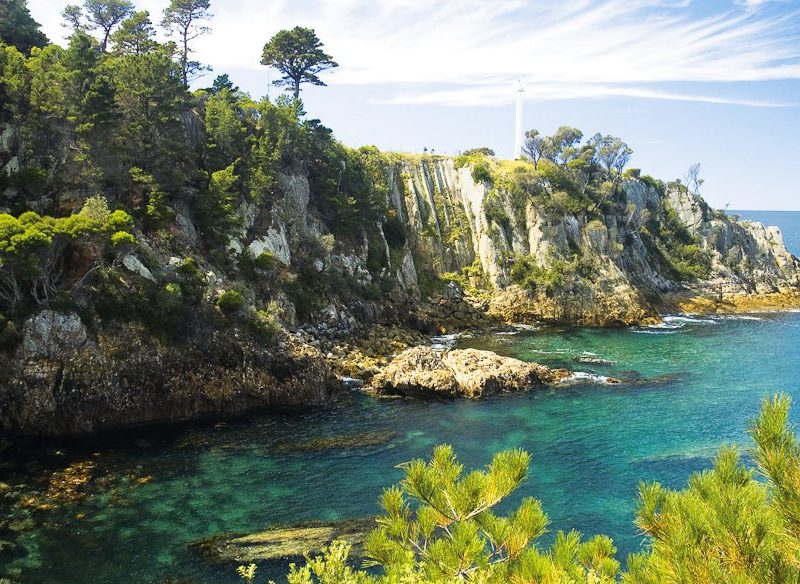 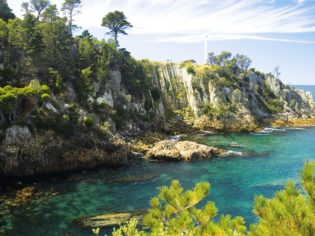 Uncrowded beaches, mist-tinged rainforests and rocky islands teeming with fairy penguins and seals… This stretch from the Sapphire Coast to East Gippsland has it all, and a host of hidden gems.

Scattered with national parks and reserves, Mother Nature puts on one of her finest performances in this special corner of Australia.

Highlights include the 100-kilometre Wilderness Coast Walk, which traverses the inlets and rolling dunes of Croajingolong National Park to the bird-rich heathlands of Nadgee Nature Reserve. Together the two parks are listed as a UNESCO World Biosphere Reserve and contain more than 1000 species of  native plants and 52 mammals.

Stop in at a string of cosy coastal towns and historic farming villages. At Mallacoota, throw in a line and fish in the solitude of a glorious sunrise or speed along a bush trail at mountain-biking mecca Tathra – an exhilarating way to take in the ocean views, which may include sightings of a visiting fur seal colony.

For a bird’s-eye panorama over the coast, take a flight to the historic pink-granite lighthouse on Gabo Island, which also boasts the world’s largest colony of little penguins. For nature lovers, the choices are endless.

Food: feast on the finest

Bursting with wholesome fresh produce, the region is a paradise for foodies and for chefs like Paul West, the Aussie host of Tilba-based hit TV show River Cottage. Try chilli chocolates at Disaster Bay, buy silky olive oil or indigenous finger limes from a Bemboka farm, or visit the monthly farmers markets at Candelo. Take an oyster tour at Wheeler Farm in Merimbula or sample crisp verdelho followed by a locally-sourced meal at Mimosa Winery outside of Bermagui. Cheese lovers can sign up for a cheese-making course at the ABC Cheese Factory in Tilba or discover the area’s rich dairy heritage at Bega. More: Sapphire Coast

Indigenous people avoided the depths of the limestone Buchan Caves, where they believed mischievous, fairy-like creatures lived. But they weren’t afraid to venture into others nearby, where they left behind stone tools showing evidence of occupation some 18,000 years ago. These caves, which are among the oldest Ice-Age cave sites in southeast Australia, are on the broader Bataluk Cultural Trail (03 5152 1891). Follow the trail, which ends in Cape Conran Coastal Park, to witness 30,000 years of Gunaikurnai history and culture. If you want a peek inside the honeycomb formations inside Buchan Caves, join one of the daily tours.

Go diving or snorkelling with whiskery Australian and New Zealand fur seals who are renowned for their friendliness and aquatic acrobatics. The rocky nature reserve of Montague Island (1800 802 528), nine kilometres from Narooma, attracts thousands of seals and migratory birds; and day tours exploring this wildlife haven are organised by charter operators from Narooma. Climb up to the historic lighthouse, with its spiral staircase, or do a dusk tour to spot fairy penguins returning to roost on the island. Better still, take your family on an award-winning, hosted two-night nature escape with Conservation Volunteers Australia and assist NSW National Parks rangers gather data.

Walkers, you’re in for a treat. Whatever your fitness level, there’s a trail to suit, from the Light to Light walk in Ben Boyd National Park – one of the top-rated walks on the NSW south coast – to strolls in South East Forest National Park, home to endangered native species such as the smoky mouse. Gippsland High Country Tours (03 5157 5556) offers a dizzying variety of nature walks, exploring the rugged gorges and waterfalls of the Snowy River National Park and heading deep into the mossy, mysterious Errinundra National Park, where scarlet Gippsland waratahs float among the eucalypts. Other trips include a five-day Seashore Life of East Gippsland walk, which allows you to collect marine data for the Museum of Victoria.

Armed with torches, expert guides from Echidna Walkabout (03 9646 8249) will lead you on a private tour of the Croajingolong National Park, where you can catch sight of squirrel gliders and furtive wombats fossicking about at night. The four-day tour, held upon request, allows you to see iconic animals in their native bushland habitat, like koalas, wallabies and kangaroos, as well as rarer marsupials. In the banksia woodlands, it’s a twitcher’s paradise. Listen for the creaky squeals of red-headed Gang-gang cockatoo, while in the eucalypt forests you could be treated to the repertoire of our best mimic, the superb lyrebird. More birdlife can be seen while boating up the Mallacoota inlet to see spoonbills, black swans or sea eagles.

Whizz through banksia woodlands and deserted beaches on a 25-kilometre bike ride to the Point Hicks Lighthouse in Cape Conran Coastal Park. Snowy River Cycling’s thrilling five-day Wilderness Cycle Tour is an adventure for keen cyclists, and includes accommodation in comfortable guesthouses and even a stay in a lighthouse keeper’s cottage. Along the way, you will explore forest cycling tracks, spot colonies of seals, and hike up Genoa Peak for a panoramic 360-degree view across the mountain hinterland, all the way to Bass Strait. Alternatively, try one of the gentler Snowy River Day Rides around Orbost, which suits all levels of riders, from a 16-kilometre pedal through dairy farm country to the robust 30-kilometre rail trail. Phone: 0428 556 088.

Getting there: Midway between Sydney and Melbourne, the closest airport is Merimbula, serviced by Rex Airlines. The southern gateway town Orbost is about four hours’ drive from Melbourne, while Narooma, in the north, is five hours from Sydney. There are regular coach services from both Sydney and Melbourne.

Eating there: Coastal towns are brimming with opportunities to feast on seafood, from fresh fish and chips to prawns. Rent a rod and haul in your own fish, or snack on sustainably grown oysters at Narooma. Drive inland to explore even more organic produce and modern Australian cuisine at wineries and country restaurants.

Staying there: Stay at a five-star lodge overlooking a lake or a cosy B&B with coastal views. The region has plenty of accommodation options, from motels, hotels, campsites to eco-retreats at both Cape Conran Coastal Park and Buchan Caves National Park.