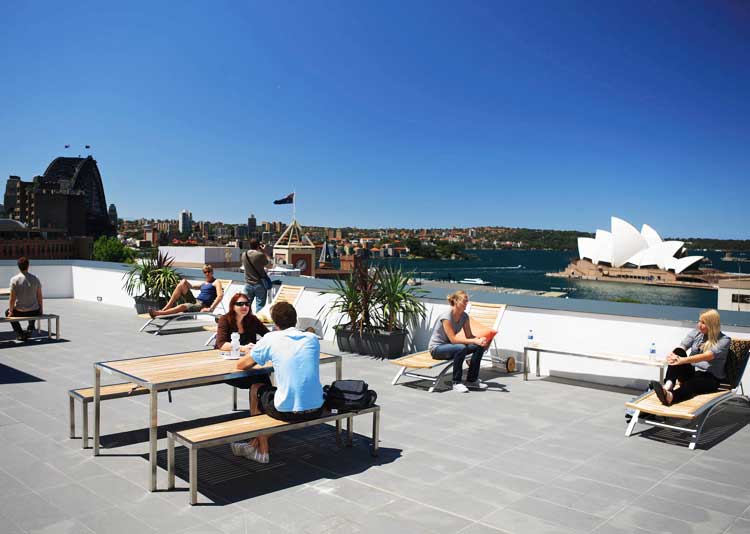 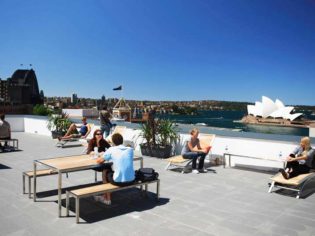 An affordable, comfortable, quiet place to stay in Sydney with killer views of the Bridge and Opera House? Mike Larder swallows his fear of hostels and discovers that the YHA is an okay place to stay.

I don’t get to Sydney much. But when I do I’m inevitably attracted to Circular Quay and surrounds as a great place to wander for a few hours. Budget accommodation has been hard to find there until the new YHA backpackers opened in The Rocks. Cheap, no frills, comfy and… quiet!

Now, quiet is not something I traditionally associate with backpacker digs. Spending a night jammed into a foetid cell with three other farting, snoring, chundering and possibly fornicating roommates – male or female – lost its appeal years ago.

I couldn’t keep up.

“It’s all about the rooftop…”

“Million-dollar views for next to nothing.”

Mike Larder, who paid his own way and visited anonymously, says:

Great for a short break, a family with light wallets and older kids saving money to indulge in Sydney’s hedonistic nightlife.”

But I rang anyway: “Would a single be possible?” I went on to explain that my preference wasn’t for antisocial reasons. You see, I live with the dreaded Ross River virus (you get it from mozzies); it’s a malady that often reduces me to a sweating, twitchy, hallucinating heap, like a junkie desperate for his next fix. To the uninitiated, it can be scary to witness, let alone sleep with.

The hostel staff were refreshingly understanding, and I was surprised to find the YHA has 54 private double rooms. They fixed me up with one for $150 a night. More than a twin-share but still a bargain considering its historic address. On checking in, my preconceived prejudice towards backpacker hostels disappeared in a moment. The place is a fusion between the starkly new and the very old, being cunningly constructed over the crumbling, historically precious remnants of a Sydney long gone. It’s just a shame the facade is so, well, architecturally inappropriate.

Unless they’ve spent their entire lives under a rock, Australians will have at least a passing knowledge of the history of The Rocks, in the shadow of the thundering iron monster that is Sydney Harbour Bridge. Captain Arthur Phillip turned up here with his flotilla of 11 ships and approximately 756 reluctant and reeking travellers on January 26, 1788. This was the First Fleet, prison ships packed with convicts, guarded by marines and accompanied by a few adventurous but woefully ill-equipped free first settlers. They set up camp in and around a pleasant little bay.

A more permanent settlement rose on the rocky promontory in the mid-1790s. By the 1850s, Sydney had urbanised. The Rocks were considered a slum. In around 1900, the bubonic plague descended upon its populace when young James Foy came home from his paper round feeling a little queasy and swiftly died a horrible death. The hundred Sydneysiders who joined young James in the local “boot hill” included only three Rocks dwellers, but the authorities razed the place anyway. A new Rocks rose from the rubble.

The site of this YHA was variously an engineering shed, a bus depot and finally a car park, but in 1994 excited archaeologists uncovered Cribbs Lane and the remains of the original settlement. Today’s $25m YHA, facing onto Cumberland St, has been constructed on pillars above this historically precious and extremely desirable piece of real estate. Entry to the multilevel complex is via an elevated walkway that traverses the unearthed settlement, with information boards thoughtfully placed around. The tiered levels surrounding the dig site are left open to the environment.

Inside, public areas, the lounge and kitchen are light and airy. Upstairs features a large deck level, furnishing travellers with panoramic vistas over Circular Quay, the constantly rumbling hugeness of the Coathanger, and across to the iconic Opera House and the North Shore. Sydney’s CBD rears up a short stroll away through the charming lanes and tree-lined alleyways of old Sydney town.

Rooms are predictably basic. Beds are comfy – the pillows especially so, the doonas crisply puffy. Large windows can partially open to allow breezes. Rooms are air-conditioned when they are shut. In-room facilities include ensuite, a jug and a few tea bags. But it’s all comfortable, quiet, environmentally sound and all you need for an inexpensive stay in central Sydney.

By the way: if a vaguely transparent and odoriferous paperboy materialises at the foot of your bed and tries to flog you a yellowing and fragile newspaper – heck! You may have just met young Jim Foy. I’m still wondering if I hallucinated that.