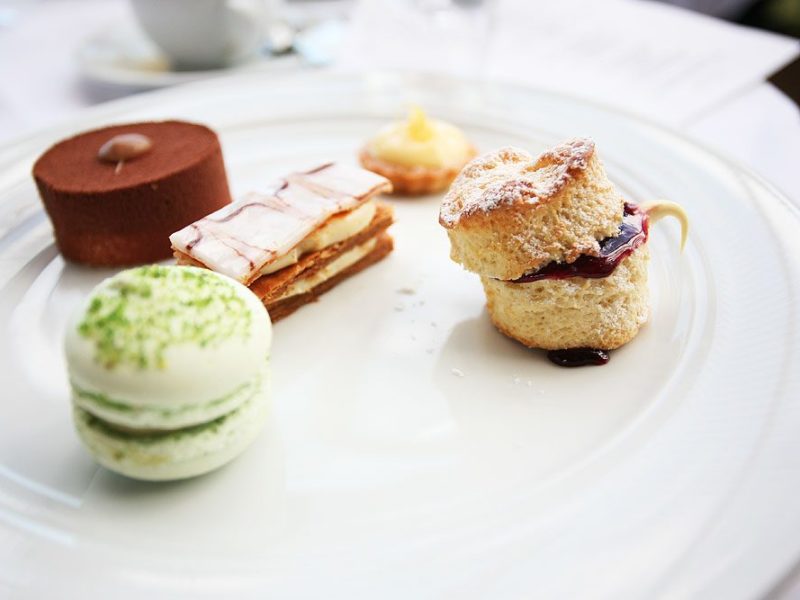 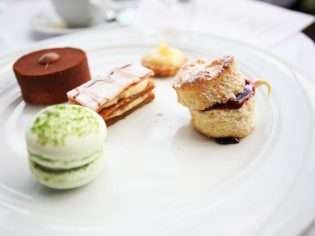 Guillame at Bennelong is one of Sydney’s revered culinary institutions and Australian traveller sent Lisa Perkovic to sample their high tea and report back.

High Tea is a time-honoured tradition. Crustless cucumber sandwiches, fluffy scones and a tiered cake stand are part of the package. I don’t stand on ceremony but some would insist on the white gloves too. At 2pm each Wednesday ladies who lunch, couples, families and tourists hand in their tickets for a seat in the Opera House’s smallest sail. Joining the line at the door, I don’t know what to expect except extravagance.

If I’m spending $145 on anything where food is involved, I want it to be out of this world. If the meals are bite sized, edible gold leaf should be decorating the dessert. Guillaume Brahimi is a guru in the kitchen and his restaurant has a reputation to match. High Tea at the Opera House in this world-renowned restaurant is a chance any tea-taker would jump at and I just can’t wait to get this show started.

Guillaume at Bennelong makes some bold moves beyond charging an exorbitant fee for tea. There’s not a tiered cake stand in sight when the savouries are served. The chicken Waldorf salad, sitting sloppily on the plate, threatens to seep into a more appetizing tomato and asparagus mini quiche. Crustless crab sandwiches are cucumber-less and a bit too salty. The sausage roll surprises by both being on the menu and tickling our taste buds. A slice of smoked salmon is satisfyingly smooth but I can’t find a lady-like way to crunch the large crouton cracker it comes on.

At this point I don’t know whether to wait for the pastries or risk walking away hungry. I’m disappointed again to see the sweet course served plainly on a plate. Lime green pistachio macaroons are sugary and the scones pre-creamed and jammed shut. Things look up with the Trio of Chocolate Mousse, a white, milk and dark chocolate pudding dusted by flecks that taste like Lindt Milo. The Traditional Vanilla Bean Mille Feuille sounded suspiciously like glorified vanilla slice but saves the day with a creamy paste oozing past crunchy pastry layers. If you can get past the disappointment of stone scones, some of the pastries have moments of greatness.

But the real treat comes after another round of tea and coffee. With an appropriate amount of aplomb, our very own Opera singer and his pianist are announced. Lured away from the bright lights of the stage, Byron Watson and Simon Kenway take some time to perform for us. Pieces by Bellini, Mozart, Puccini and in an ode to the American tourists, Rogers and Hammerstein, are performed. At the Observatory Hotel up the road, a pianist provides dainty background music but this performance takes full advantage of the Opera House’s acoustics. Without the mariachi band or accordion, being serenaded at your table is quite romantic. That is until the tourists outside rub noses up against the glass to catch a bit of the show.

Feeling like monkeys at the zoo, if we’ve got to be ogled this is the perfect place for it. Our gilded cage comes with light filled chandelier ceilings, silver service and 360 degree views of the Harbour Bridge, Circular Quay and the Botanic Gardens. It is the same view you can see for free from the Opera House steps, which is why tourists are blocking our view. We’re paying for the privilege but sitting smugly inside the sail listening to “Oh! What a beautiful day’” is something I could get used to.

It’s true dinner at Rockpool or Aria might cost around $145 a person but there probably isn’t an opera performance between mains and dessert. Having said that, $145 is a high price to pay for a half hour serenade. The same amount could buy a seat at a Sydney Opera House performance- where there’d be more grandeur, symphony and ceremony.