An antique aviation adventure on the Tiger Moth 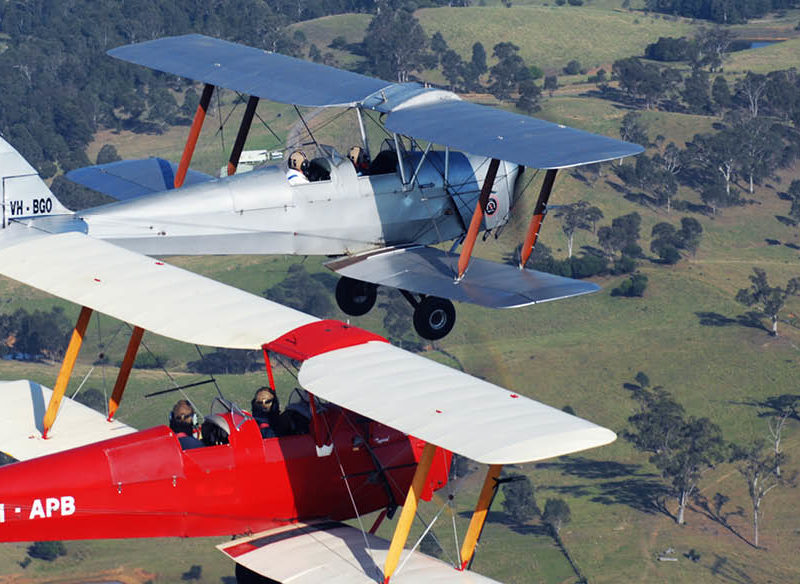 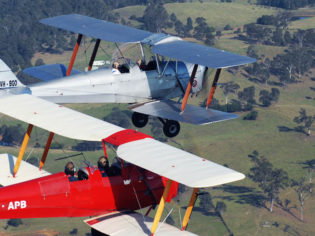 To see history from a different angle, Jac Taylor went upside down and all around on a Tiger Moth aerobatic flight.

Pete the Airborne Aviation pilot picks up the end of the Tiger Moth plane and casually wheels it around to a different spot on the tarmac. Since it’s the same plane we are about to clamber into and head for the skies in, I try (and fail) to be just as casual when I ask about the total weight of the thing.

“Five-hundred kilos, or not much over that,” he replies. “It’s all in the front end with the engine, so you can easily move it by the back. These wings are canvas on the outside, wooden spars on the inside, and just the frame on the inside is metal.” He looks at me for a moment and a hint of a smile comes up. “That’s all that’s between you and the outside when you’re out flying.”

Well that, and an authentic-looking Red Baron-style leather hat, a headset for communications and the all-important safety-belt harness that I try to subtly check a hundred times as we taxi away from the hangar in this canvas and wooden beauty that only weighs about the same as your average horse. Just like on a horse, the guy in charge sits in the back while the passenger sits in the front, and desperately tries to keep her feet still. There are pedals down there that I’m gently reminded not to absentmindedly tread on; I don’t ask any more questions but resolve to Not. Touch. Anything.

It’s a rare experience to see and touch (or not touch) a magnificent flying machine such as this bright-red, handsome Tiger Moth, I think with a shy thrill – let alone climb right in and ride together into the air, as this antique has been doing for over 75 years. Her name is Hotel Charlie India and she was built in 1940 in Bankstown, with a 130-horsepower engine built by General Motors and cylinders just bigger than those of a Holden car.

It may not have the adrenaline-rush reputation of a jet-fighter ride or a parachute jump, but the sheer age of this plane, and the simplicity of an open cockpit, makes an aerobatic flight such as the one we are embarking on, a daring challenge and a taste of history all tied together.

We trundle along to the open part of Camden Airport, an hour south of Sydney, and dip off the tarmac onto the grass. I see a green field, but pilot Pete Fowler sees Runway 10, and we kick up a fair bit of lawn as the Tiger Moth gains speed quickly – she’s light, after all. We lift so easily from the ground that my tension falls away with it and I find myself grinning.

Pete brings us in a wide loop and we head toward Warragamba Dam, gaining altitude to about 4300 feet. I’m snug in my jacket but I’m certainly feeling that it can be 10 degrees cooler up here. I again think of those wartime pilots flying at up to 30,000 feet, in colder climes, with little heating and an open cockpit.

Then we begin. Pete describes each move before we do it, then executes it with precision and a palpable sense of happiness. He loves what he does – that’s clear. And why not? We slide into a 60-degree turn, then two rollercoaster-like wingovers, pitching up steeply before swerving flatly into a turnover. Beneath us, houses, fields, livestock and businesses all represent the real world, while we challenge Mother Nature herself, impossibly upside down. I spy a car pulling over to the side of the road below, and realise that we are likely the spectacle the driver wants to see, and I get that rock star feeling until I realise I’m screaming – just a little bit – as we move into a barrel roll. It is literally like sliding around inside a barrel, all the way round.

There’s no more time to think as we commit to a sequence: another wingover, into a hammerhead, into a barrel roll, into a loop, into a barrel roll, into a hammerhead. The hammerhead tests my resolve to be cool and calm, as we fly straight up vertically, with dark sky dead ahead of our nose, then, as Pete puts it, “we wait until we just about fall out of the sky”. That’s the point when he puts the rudder back in, we go back around to face the ground instead and reach four Gs as the Earth looms larger… until we turn into another manoeuvre.

I can’t tell if it’s the plane or me that is being put through their paces, but I hear screaming again – just a little – as we spin. Is that me again? Once, twice, all the way to five times around, losing 1200 feet in altitude. The screams turn to big belly laughs and we take some steep turns to get down to 2000 feet. Pete asks the tower for clearance and we are permitted as far down as
a mere 800 feet above the ground, to follow the Nepean river directly below us, mimicking its bends with our own path in a returning joy ride that, to use a word of suitable vintage, is delightful. Now I can really see the people on the ground, stopped and watching us. My teeth are cold and dry, my cheeks are sore from smiling and I honestly feel light as air.

Airborne Aviation have a number of Tiger Moth planes ready for scenic flights or an aerobatic flight like this one. A 30-minute aerobatic flight costs $300; for $50 more, you
can get an in-flight video of your experience. Maximum weight is 115 kilograms. airborne-aviation.com.au

The flights depart from and return to Camden Airport, just over an hour’s drive south-west of Sydney.