Inside the Sydney Opera House 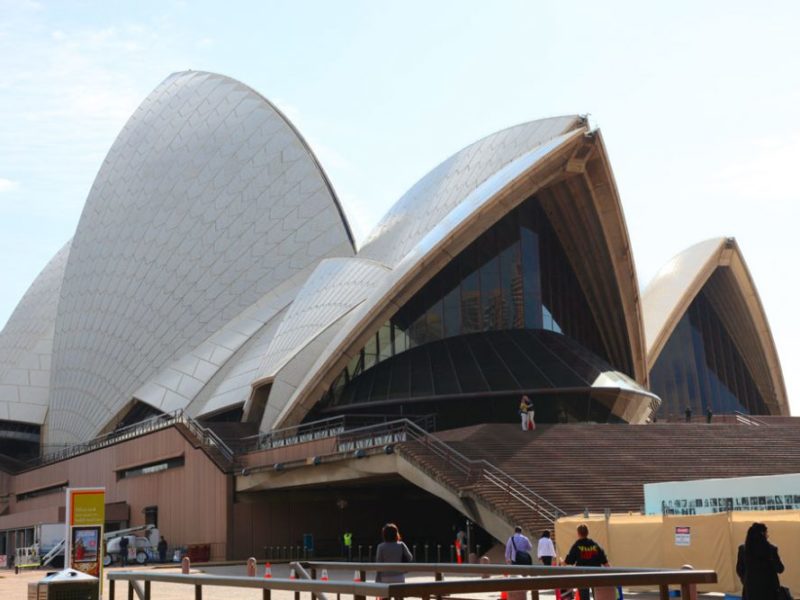 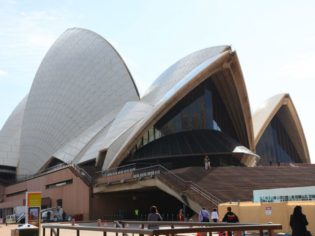 On a guided tour of Sydney’s most famous house, AT’s Alissa Jenkins discovers there’s much more to this premier theatre house than its iconic white sails.

It’s one thing to see the Sydney Opera House, another to stand on its steps, but short of seeing a performance here, a guided tour of Australia’s premier performance space is one for the bucket list.

I conclude this while standing on the steps of the iconic building, eager to begin the one-hour Essential Tour of its interior.

A smiley, well-spoken guide named Jorja soon arrives and introduces herself to the group I’m with, before directing us through the Stage Door and to the backstage area named Central Passage.

We soon arrive at the Opera Houses’s smallest theatre, The Studio. The rich red carpet and seating makes a dramatic impression. I’m struck by how intimate the space is. Seating 220-300 (depending on how the seats are configured), The Studio is also the youngest theatre and was once used as a rehearsal space and a library.

Moving along into the Western Foyer, we soon come to the Drama Theatre – popular for Shakespeare performances. With 544 seats, ten actor trapdoors and an inbuilt turntable on stage for effective set changes, we’re told the theatre is highly sought after by those in the industry.

Next stop is the stunning foyer of the Opera Theatre. The rich red colour scheme continues here, contrasted by a bright blue ocean view beaming through the foyer’s large windows. Jorja explains how the Danish-born architect of the house, Jorn Utzon, designed the building to showcase the stunning surroundings.

I take a seat on some steps as Jorja plays a short film on a flat-screen television neatly mounted on the wall. It briefly details the history of the location, known Bennelong Point, until the concept of an opera house was conceived by a conductor of the Sydney Symphony Orchestra in the 1950s.

Many designs for the building were submitted and rejected, including Utzon’s own until it was later retrieved from a pile of discarded plans.

Construction began in 1959 and was originally estimated to cost $7 million. Following 16 years of construction and a $106 million bill, the renowned Sydney Opera House was opened by Queen Elizabeth II in 1973.

We continue on to one of the house’s largest spaces – the Opera Theatre. Booked up with opera and ballet performances for most of the year, it has an impressive orchestra pit which holds up to 70 musicians below the stage.

However as Jorja explains, the stage was designed without much wing space so there have been instances during ballet performances where the theatre has had to hire big, strong men to stand at the side and catch leaping ballerinas as they come off stage to prevent them crashing into the wall.

Above the stage is a screen that displays subtitles during opera performances, which I’m told is why seats in The Circle are highly sought after.

All five of the Opera House theatres have been designed with acoustics in mind, but considerable effort was put into the Opera Theatre so singers are able to perform without microphones or speakers. Sound is amplified via the timber floor and ceiling and the seat configuration also plays a part.

We’re shown another brief clip about the building, this time focusing on the controversy behind Utzon’s design, which ultimately forced him to resign mid-way through construction. His premature departure back to Denmark meant the interior of the Opera House could not be built according to Utzon’s original plans.

The Opera House’s other main theatre is the spectacular Concert Hall. With 2679 seats and regularly hosting performances by the Sydney Symphony Orchestra.

Gazing at a strangely shaped formation on the ceiling above the stage, Jorja informs me the structure is called an ‘acoustic cloud’. A storage area called a ‘fly tower’ is usually positioned in its place in conventional theatres, but it has been removed in the Concert Hall to direct the sound back to performers so they can hear themselves – important for musical performances where musicians need to keep in time with each other. As a result, there’s no need for stage speakers.

The tour ends with a visit to the Utzon Room, which is regularly used for functions, small piano recitals and children’s performances. Positioned right on the waterfront, the space is bordered by a large glass window overlooking the sea and a colourful tapestry created by Utzon, titled ‘Homage to CPE Bach’.

Utzon never returned to see the Opera House complete, and as beautiful as the building is, I can’t help but wonder what he would have thought of it now.

Fun facts // There are several tours to choose from, including The Essential Tour (which I did), Backstage Tour and Asian Tours, each of which are available in a number of languages.