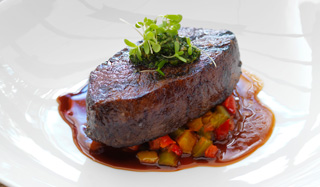 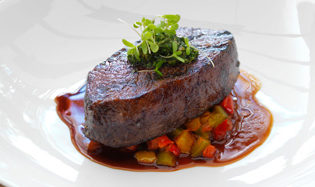 Out of the usual central Sydney suburbs, Alissa Jenkins ducks across the bridge to test out a newly revamped French restaurant. But is it worth the drive?

Crows Nest is an unexpected hub for fine dining. Located on Sydney’s the lower north shore, this commercial area dotted with office blocks and shop fronts has some unexpected gourmet gems.

So when the opportunity arose to check out the recently reopened La Grillade near the suburb’s centre, I was curious as to what the French-inspired eatery had to offer.

Over the bridge and perched on the corner of Alexander and Albany Streets is a charming old terrace painted grey, which houses La Grillade.

As soon as I walk through the bright yellow front door, I am greeted by attentive wait staff and a warm, inviting atmosphere. As I am shown to my window-side table, I look around the rustic interior, lit by dim wall lamps and candles. It’s a careful combination of provincial France and a contemporary colour scheme.

Drinks soon arrive and as we peruse the menu, there are too many tempting choices so we opt to let the chef decide our order.

Admittedly, this decision is also lead by the fact I can’t understand half the menu due to a lacking French vocab’.

Having said that, the restaurant does not feel at all pretentious. Any questions we have throughout the night are answered by the knowledgeable staff, in terms that even a layman like myself can understand.

Half a wine later and our first hors d’oeuvre arrives, a goats cheese and potato mousse, “designed to get the tastebuds going” says the waiter. And that is does, tasty and rich, contrasted by a light fluffy texture.

Then two by two, more starters follow – each impeccably presented, matched by an equally interesting but delicious taste.

Among them are fresh Sydney rock oysters with an apple mignonette and cucumber sorbet; smoked ocean trout with crème fraishe dill and pistachio foam (a must!); and a pork and pistachio meatloaf with pickled cauliflower and mustard.

Already satisfied, we rest from the feast so we can fit in mains and dessert.

I look across the room into the open kitchen and try to analyse the dynamics among the chefs. There’s not the obvious stress that I expected, everyone appears quite calm, working like a well-oiled machine.

It’s surprising given that the revamped restaurant only reopened on March 7.
However La Grillade itself has been running for almost 30 years, during which time four operators have had their turn at the helm of the business.

It wasn’t until last December that current owner, Rob Rubis (previously of Manta Restaurant) and his business partner took over. Since then, everything has been revamped – the interior, the management, the menu and a new chef to boot.

The first main arrives and it doesn’t disappoint – blue eye cod fillet with potato, fennel and a mouth-watering pumpkin and pistou sauce. This is proof that fish needn’t be the tasteless dish!

The fish is so tender that each time I break away a mouthful with my fork, a couple more segments of flesh slide away too.

But for me, next is the highlight – full-blood wagyu ‘flat iron’ steak, served with a bell pepper salsa.

Oh. My. God. I don’t think I have ever eaten such a dish where each mouthful is as powerful and eye-rollingly delicious as the first. To quote the friend I was dining with, “this is by far the best steak I have ever had.”

With gluttony is full swing, dessert arrives some time later.

We share the candied apple, poached rhubarb and sponge creation, served with basil ice cream; as well as the chocolate ganache with banana ice cream and malt caramel. Suffice to say they’re both super yummy but uber rich.

Busting at the seams, we almost give the cheeseboard a miss, but we’re assured by the waitress it’s worth staying for. Thankfully it is – in fact the sheep milk blue-vein cheese (served with rhubarb and celery shavings) alone is worth the extra stomach pain and expense.

So as we waddle out of the restaurant, my verdict is cemented. La Grillade is stylish but not showy, romantic but not over-the-top, while the staff are attentive and friendly, but not in-your-face. And considering the quality of food, the service and the atmosphere, the price is very reasonable.

Granted, it is a bit of a trek for an inner-west dweller like myself, but if you’re in the area or looking to try somewhere new in Sydney, it’s worth the effort.

Alissa was a guest of La Grillade