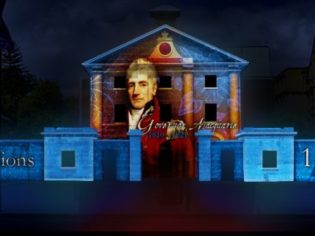 Purple sandstone, orange windows and blue iron gates are about to take over Sydney’s historic Macquarie Street after dark as part of Macquarie Visions. By Liz Schaffer
Macquarie Visions, a free and enlightening event running from May 27 to June 21, celebrates the 200th anniversary of visionary leaders Governor Lachlan Macquarie and his wife Elizabeth.

A major event in the Vivid Sydney festival of light, music and ideas, Macquarie Visions will transform landmarks, including St Mary’s Cathedral and Parliament House, making Macquarie Street the ideal place for a family promenade or late-night expedition.

Light, sound, technology and techniques, some never seen before in Australia, are bound to shed new light on The Mint, Palace Garden Gates and Sydney Conservatorium of Music.

Cast your mind back to those school history lessons to remember why the Macquarie’s are worthy of illumination. In twelve years they introduced the colony’s first horse race, pioneered our justice system and made the ‘fair go’ truly Australian.

Chair of the Macquarie 2010 Bicentenary Commemorations Committee, the Honourable John Aquilina MP, says “Lachlan and Elizabeth Macquarie made an unparalleled contribution to the growth of our great state and our nation … championing the importance of agriculture, education, justice and benevolence.”

The contemporary and dramatic displays of Macquarie Visions will shed light on these legacies in a 2010 context.

Brightening up Sydney each night at 6pm, Macquarie Visions begins in spectacular fashion with innovating lighting allowing St Mary’s Cathedral to rise out of the ground. The stunning effect is heightened by iridescent shafts of light pouring out from the church itself. This is the ideal start to an event designed to reflect Macquarie’s huge building program.

Take in Sydney’s famous Macquarie era buildings and the Royal Botanic Gardens, founded by Elizabeth Macquarie, as you stroll from Hyde Park Barracks to the Sydney Opera House – it really is the best (and cheapest) way to pass your winter nights. Be sure to cap off your evening with a glimpse of the Sydney Opera House’s stunning sails, illuminated as part of Vivid Sydney.

Macquarie Visions’ family-friendly light displays promise to entertain, captivate and enlighten and tell the story of our colony’s creative leaders and their legacy.