Newtown: a shopping and eating Mecca 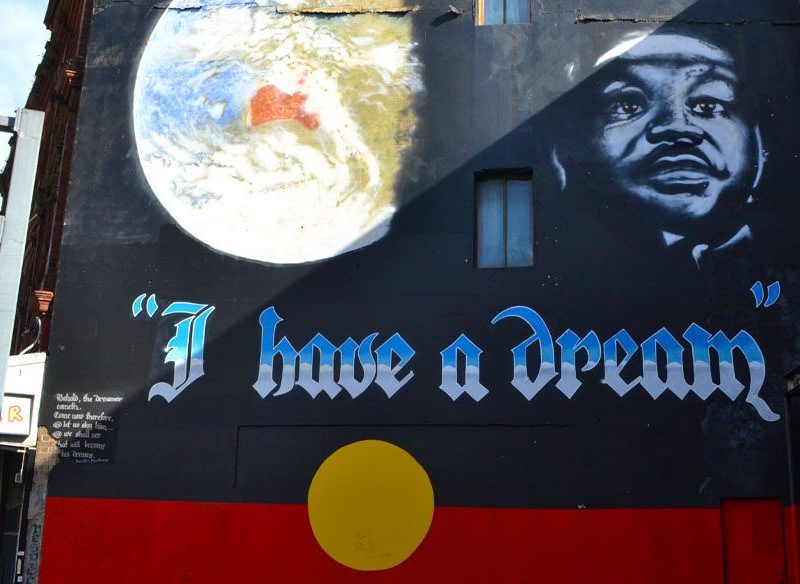 The Sydney suburb of Newtown has a colourful past – all the better to eat, shop and play here, says Brendan Wong.

Newtown, in Sydney’s Inner West, is one of the city’s gems with its multicultural restaurants, vintage op-shops, indie fashion and youthful vibe.

Located four kilometres from the CBD, this place is a real shopping and eating Mecca. Whether you’re a local or a tourist, you can’t go wrong with a day spent here. Shopaholics and fashionistas will find a plethora of great bargains while foodies will find plenty of cheap eats.

Although I’ve driven through the area on my way to and from the city, I’ve never explored the inner west on foot so I dedicated a day to exploring it.

From Newtown Station (where most Newtown journeys begin due to the difficulty of parking in the area), you’ll find the iconic Martin Luther King Mural, “I Have a Dream”, designed and spray painted by Juilee Pryor, Andrew Aitken and members of the Unmitigated Audacity Productions in August 1991.

This is just one of the many street arts you’ll come across in the area. Fortunately, unlike the usual scribble of vandals, most of the graffiti is actually quite colourful and adds to the area’s character.

The last time I stopped in front of the Martin Luther King Mural, I was approached by a friendly street vendor who knows a lot about the area. When asked about what he liked about the area, he told me, “Newtown’s not like the other places. It is very mixed and there are a lot of young people. It’s very nice and the prices are low.”

It’s true, prices are lower here and it’s thanks to the numerous vintage op-shops and second-hand stores. Make sure you visit Red Cross and Vinnies stores for cheap buys.

You know an area is cultured when it’s got multiple bookstores and Newtown is one of those places. I came across a number of bookstores selling used and new books. Gould’s Books and Videos has two floors cluttered with books and magazines – a bookworm’s haven – as well as old CDs, VHS and DVDs.

If you prefer watching to reading, there’s also Dendy Cinemas, where you can catch the latest flicks – both mainstream and indie.

The food in Newtown is ridiculously cheap especially the lunchtime specials. There are unlimited options for food: every cuisine in the world is represented here though Thai restaurants are probably the most dominant.

It seems that the further you get from the town centre, the cheaper the restaurants are. This is probably due to the fact that Sydney University is just a block away. I eat at Thai La Ong, which has a $6.50 lunch special – what a bargain.

For dessert, I head a few shops down to Vegan’s Choice for tofu ice-cream, which I discover tastes pretty much the same as regular ice-cream. I highly recommend the coconut flavour.

To walk off the lunch and to get a breather from the chaos of King Street, I head down to Camperdown Memorial Rest Park. Here there is even more street art – many politically-orientated – covering the long sandstone walls surrounding St Stephens Anglican Church. Don’t forget to go inside the church grounds to see the cemetery that dates back to the 1800s.

If you have time, walk further south of King Street towards St Peters where the shops became more Mediterranean in theme. The Afghan Interiors store looks like a Middle Eastern Harem with its range of homemade crafts, furnishings and interesting lightings.

For a return trip, take a detour along the back streets of Alice Street and Edgeware Road to check out the old Victorian houses and small mansions of the Inner West. At the end of Edgeware Road, you’ll arrive onto Enmore Road, which will return you back to King Street.