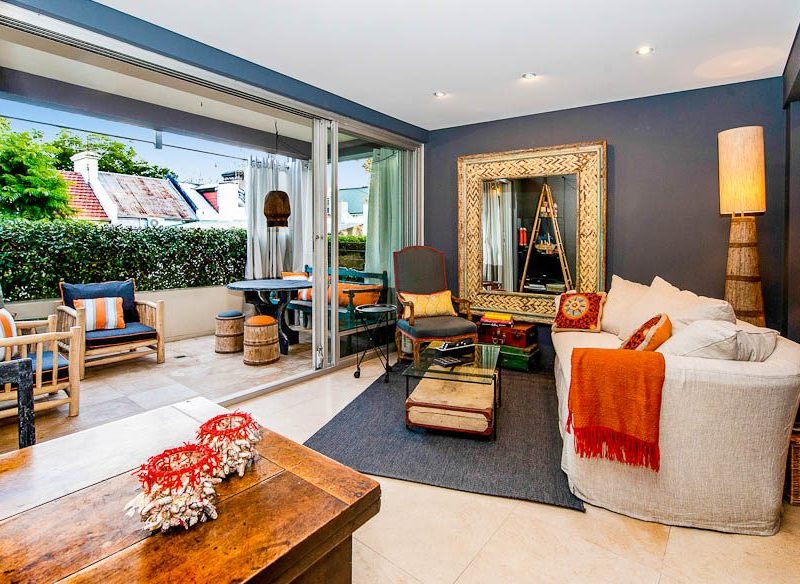 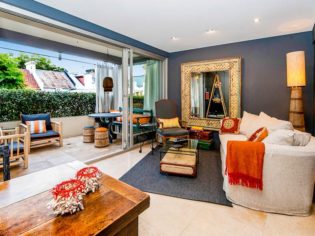 No lobby, no room service, no valet parking – Alissa Jenkins finds out if this discreet abode upholds its designer reputation.

This might just be the ultimate night in. Outside the rain is pouring, but I’m inside, amongst friends: soft down-lights, designer furniture, wine. So far they’ve kept silent on my choice of outfit (a fluffy robe, not much else), which seems rather generous but then, we’re in a discreet kind of place.

This is  The Contemporary, one of three properties dotted throughout Sydney’s central suburbs by the so-called ‘tastemaker of Sydney’, Geoff Clark. Clark is founder of interior design empire The Country Trader (the largest importer of one-off, designer furniture in the Southern Hemisphere). And this, his latest venture, sees him apply his signature interiors to these one-off apartments – The Grand, The Boutique and The Contemporary – each of which were launched in May last year.

“There was such a hole in the Sydney market for beautiful, high-quality accommodation, which wasn’t just another multi-storey, mass-produced, plastic hotel,”Clark tells me at a later date. “I wanted to get away from that and create a place where you can really feel at home and enjoy an individualised experience, rather than having hotels trying to fit us all into the same square room.”

The idea was born from his extensive travels around the world sourcing signature furnishings, he says. During these trips he discovered a network of boutique-apartment stays, which he now rents each time he travels.

“It’s such a different way to experience travel, and I wanted to bring that to Sydney.”

The properties each have a distinct style but are all furnished with pieces from his private collection. The Grand is opulent and spacious with Genovese crystal chandeliers; The Boutique, industrial but fun with a 17th-century Italian doorway used as a bed-head; and The Contemporary, the smallest of the three (and where my robe and I are calling home this evening), is a designer combination of eccentricities and oddities.

Of course, the real test is whether the apartment’s functionality and comfort are as well thought-out as the design. Apartments are available on a minimum three-night-hire basis (unless you’re interested in paying an inflated price of $475 per night); the reasoning behind that being, leisure travellers are increasingly looking to immerse themselves in destinations.

Location-wise, The Contemporary fits this brief. It’s tucked away down a strangely quiet residential cul-de-sac in gentrified, yuppie suburb Darlinghurst, with the front door found up a staircase (shared with a private residence at the top).

Inside is a world away from the rain-soaked exterior. A subtle floral fragrance wafts through while a hand-written welcome note awaits on the dining table. Charcoal-coloured walls are adorned with an eclectic mix of artworks, from an original sketch to a large mirror, framed by what was once the border panel of a timber ceiling from India.

“The apartments have been designed to be enjoyed at night, because that’s when I think people spend the most time in their hotel rooms,” explains Clark.

“That’s why I’ve used a lot of rich, moody and cosy colours; The Contemporary has quite a Moroccan feel. We’ve also focused on lamps and candles to help create a relaxing atmosphere for guests that are winding down.”

The layout is small but spacious enough for two; open but private; cosy, but not cluttered.

Rustic touches such as stacked vintage suitcases and painted tequila bottles in the shape of matadors are juxtaposed by a flat-screen television and sleek galley kitchen. Where’s a chef-trained boyfriend when you need one?

But Clark’s travels aren’t just reflected in the eclectic furnishings; they’ve inspired some thoughtful touches too. A rummage through the bathroom’s vanity reveals a shoe-cleaning set, sewing kit and lint brush, while the laundry cupboard also stocks beach towels and a picnic basket – clearly, considerations of a seasoned traveller.

Outside, separated by a large, glass, sliding door, is a sizeable outdoor area with colourfully-cushioned seats and tables, framed by a hedge and light curtains. Remove the raindrops, and it’d be an idyllic setting for summery evening drinks.

And the silence is worth mentioning again – it’s surprisingly quiet considering Kings Cross is less than a kilometre away and St Vincent’s Hospital is even closer.

With neither room service, nor an on-site restaurant here, guests are forced to make like the locals and head out for food (or come prepared with groceries to cook with). Battling the elements, I head to one of the pizza joints on the busy Darlinghurst strip on nearby Victoria Road– not a bad thing, it boasts a litany of restaurants and chic wine bars (as do other nearby hotspots Paddington, Potts Points, and the CBD).

Across the road there is also A Tavola, who serve arguably the best pasta in these parts; down the road is local institution Café Tropicana, dishing up cheap and cheerful meals to the colourful mix of ad execs, uni students and beautiful people who swan in and out.

Admittedly, meal times aren’t the only occasion where guests are left to fend for themselves. If you arrive after hours (as I did), don’t expect someone to greet you. Housekeeping also typically visits twice a week, rather than daily.

Still, you’re not completely left to your own devices. Vivacious concierge Robert will not only personally call to confirm your booking, but looks after special requests (bed-top rose petals for anniversaries, tickets to the local theatre, restaurants bookings) and will email you a step-by-step pictorial guide to operating the security box at the entrance to retrieve the keys. He’ll also call again at the end of your stay, to ensure you had a pleasant one. And if you have any queries, he is on-call around the clock – phantom host but personable service.

Darlinghurst is home to more dogs than children, residents often claim with pride, so if you’re child-free – for the weekend, at least – The Contemporary makes for a surprisingly homely getaway. Even when it’s raining (or, perhaps, especially so). For even if Noah wasn’t outside brushing off his ark, the night would be spent exactly like this: at home, sorry – hotel, wrapped in a robe, overlooking Darlinghurst, soaking up the city from afar.

The verdict: This truly is a home away from home for those looking for a city escape. It’s private, self-contained and undeniably stylish with thoughtful touches, as well as being centrally located with plenty of nearby attractions. Leave the kids at home.

We rated: The insanely comfortable king-sized bed, which I later discovered has the same plush bed topper used in suites at the iconic Burj Al Arab Hotel in Dubai. There’s also plenty of cupboard space for over-packers and longer stays.

We hated: For such a cosy, high-end city escape for couples, it’s a shame there was no spa bath.

Where: 15 LittleWest St, Darlinghurst, just off Victoria Rd.There’s an abundance of restaurants, bars and boutique shops within short walking distance.

Notes: From $295 per night (minimum three-night stay), or $475 per night for bookings of less than three nights. The Contemporary does not include parking but there is a Wilson Parking Station nearby.