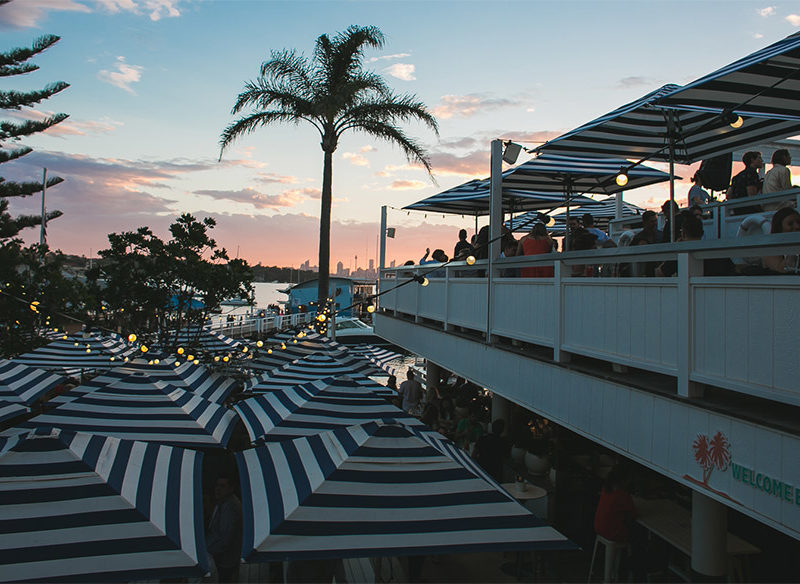 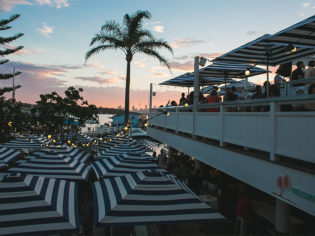 A queue of sunburned daytrippers stands on Watsons Bay Wharf, reluctantly waiting for the return ferry to Circular Quay. They leave. And then another ferry-full a while later.

I survey the exodus from my balcony, watching the sun repelling down the bushfire sky. Usually I would be on the ferry with them, but tonight I am in the minority who’s remaining overnight in this day-trip Mecca. 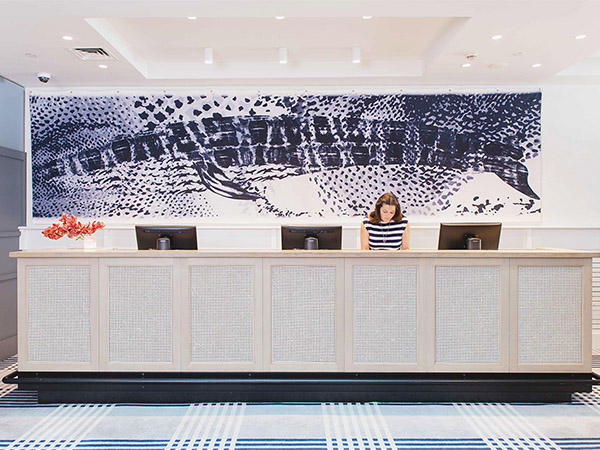 A daytrip to Watsons Bay, a pocket of picturesque decadence nestled in the wing of Sydney’s South Head, has been a harbour-city tradition since at least my grandparents’ day. Back then, it even had its own tram line, all the way from central Sydney (12km).

Takeaway fish and chips from Doyles wharf restaurant or a sit-down seafood feast at the harbour beach-front version. Amble up to the cliffs of The Gap, marvel at the immensity of Sydney’s heads. An ice cream in Robertson Park. Shade from the sun under the Moreton Bay Figs. Perhaps a swim at Camp Cove. Then time to head home, via congested Old South Head Road, or the charming but rammed ferry. Repeat next summer… 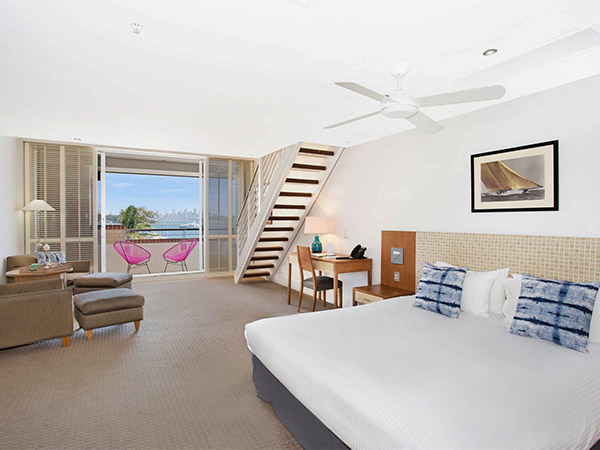 Watsons Bay has always had low-key accommodation options, but until relatively recently they have been mainly ignored (or unknown); until the opening of Watsons Bay Boutique Hotel, and a recent $2 million upgrade.

The overwhelming asset of this place is its grand view, straight down the harbour, towards the cityscape, seemingly in another country. The view will command your attention as long as you allow it to: sleek yachts, historic buildings, such as the 1830’s Dunbar House; the bobbing boats, wharf and timber boat sheds project a rarefied early-1900’s vibe. 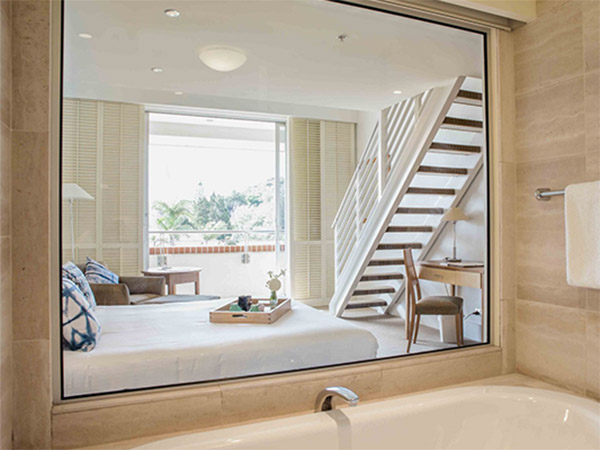 That’s why I’ve been standing on the narrow balcony of my Harbour View Deluxe King Suite for about an hour now; drinking in the surroundings, pitying the returning ferry-goers.

Of course, not all of the boutique hotel’s 32 suites have this uninterrupted harbour outlook: but, luckily, this one stares straight down the barrel of a blazing sunset. 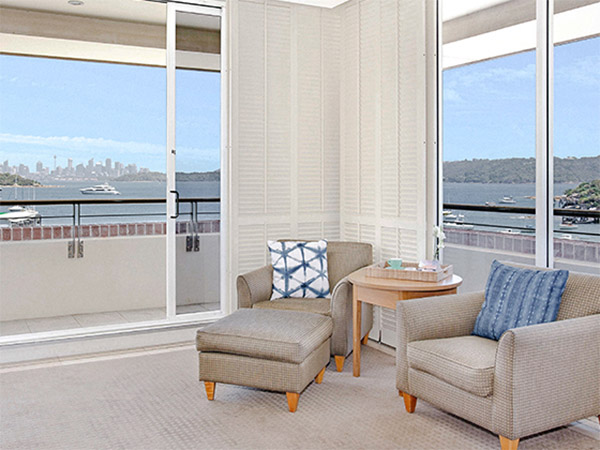 Thanks to ceiling-to-floor windows, which skirt the entire north-facing wall, as well as the front, ample light floods into the suite. A modest sea spray build-up on the windows only slightly dampens the vista.

Taking the hint from its surroundings, the hotel adopts a nautical theme, with the décor, inside and out, striving for Hamptons’ chic. The decadently proportioned room has space to burn, the modern neutral furnishings – in tans, woods and nautical blues – are functional and comfortable without straying into glamourous. The bed, with its crisp white Manchester, comfortable enough to promote repeated snooze reactivation in the morning. 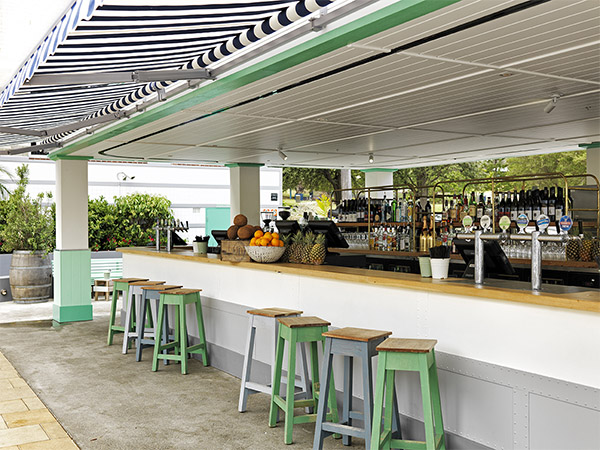 The grand bathroom befits a suite of twice its size, with the separate toilet and shower rooms offering bay views (if you decide to open the blinds sandwiched between the glazing).

Small elegant touches, such as T2 tea and Peter Morrissey bathroom accessories, show that there are few, if any, afterthoughts here.

The hotel’s Beach Club, various levels of courtyards and bars facing out onto the foreshore, including the recently extended ‘top deck’, hums on the weekends. Soft Euro beats mingle with the pop of a hundred conversations, floating up to my top-storey room. When closed, the double-glazed doors mostly block out the chilled Sunday-arvo ambiance, but this is probably not the hotel for you if you demand utter silence.

The Beach Club will eventually draw you in: equal parts relaxation and energy, seeking to replicate “mid-century  ‘Miami cool'”.

Executive chef John Pye’s menu, as Watsons Bay tradition dictates, borrows heavily from the sea. The yabbie and crab linguini (at $29) one example of a dish that provides tangible competition to Doyles fare: the bottarga and egg linguini complementing the crustacean’s sweet meat perfectly. The antipasto board ($36) is a good wine companion, the provolone cheese the creamy highlight. 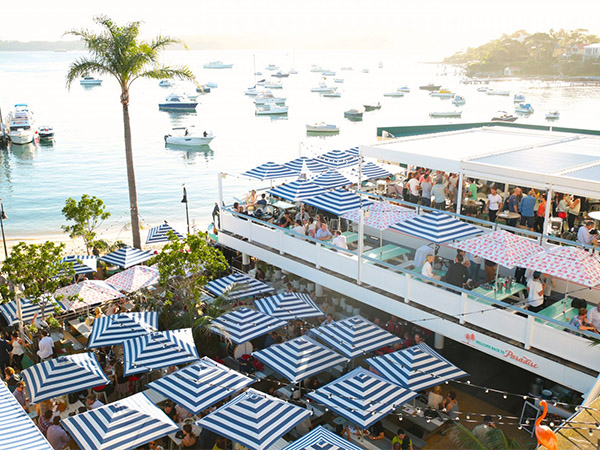 The laid-back staff are closer to those found at an island resort than a pampering five-star palace; although sometimes a little too laid back, when it came to my check-in, which was a smidge delayed as the room was still being prepared.

It certainly feels resort-esque in other aspects too, from the moment you walk into the unpretentious lobby, lit from several stories above by a bighearted skylight.

And when the weekend crowds leave, it feels almost like you are in a cool beachfront property, in a small town, far, far away from Sydney. Almost.

Perhaps it could be a little too ‘quiet’ during the week, with a limited choice of activities and shopping, but thanks to this boutique alternative,Watsons Bay is no longer just a destination for daytrippers. 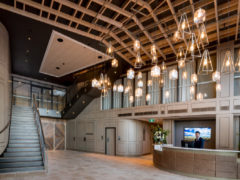 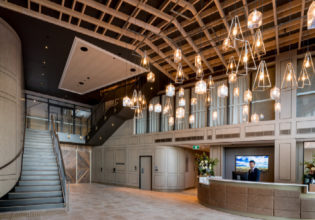 Looking for a little solitude away from the hustle and bustle of Sydney? We’ve found just the place… If you enjoy great wine, incredible food, a ...