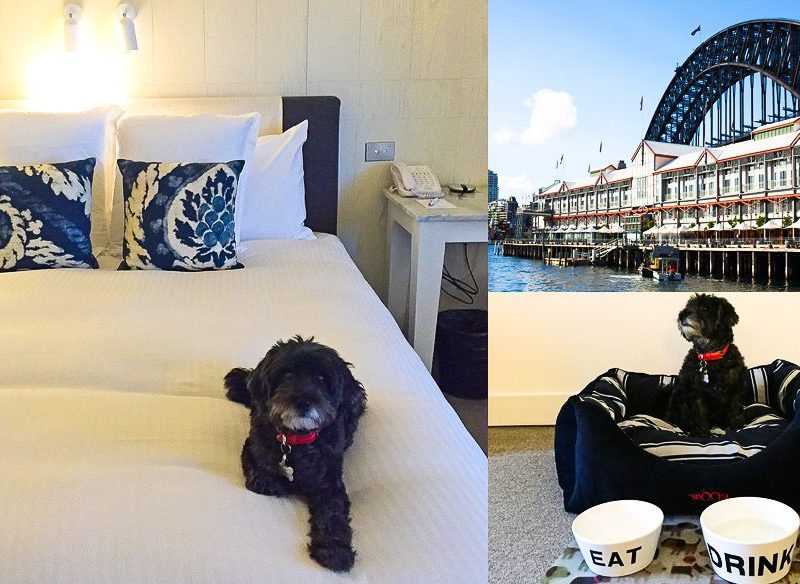 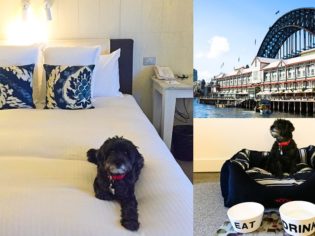 Editor Georgia Rickard’s dog ‘Kingston’ the schmoodle recounts his adventures in a ‘dog-friendly’ room of the five-star Pier One Sydney Harbour hotel. Did he have a ruff time or was it a howling success?

Before I begin this update, dear friends, I must acknowledge that it’s been a while my last correspondence.

My apologies – I have recently moved house, and my new neighbours have been very interested to know who the famous ‘Australian Traveller dog’ is, so I have been forced to appear at the local park many times, offering all kinds of insights into my life. Having once lived in obscurity, I am aware of public fascination with celebrity, and generously give away information about my life, and even pawtographs, without having to be asked.

But then I heard of a rumour going ’round the park that a luxury hotel in the city has been recruiting for a full-time, live-in canine. According to Ruby the Labrador, a dear friend of mine and quite high up in the canine community (she was close with Hairy Maclary before he passed away, you know), the hotel has been looking for a pooch to act as the hotel’s main social attraction for quite some time.

The right candidate, Ruby said, would be well bred, exceptionally attractive and possibly black in colouring. Well! Admittedly, it took a long time for Ruby to convince me that I was indeed the ultimate candidate for the job. After all, who am I but a mere schmoodle, admittedly of the finest coat and character, but just a simple soul at heart?

The trouble with my human

There was just one thing standing between me and my destiny, though – my human. I realised, at this point, that if I accepted this honourable role that I would need to part with her. What a conundrum!

It would be a sad affair, no doubt, as she is quite masterful at tummy rubs – but we are both adults. After chewing the matter over for some time with my faithful companion and teddy bear, Frederick, I concluded that she would eventually recover from the heartbreak of losing me. This was all meant to be.

Before I could pack my doggy bag and bid my old life adieu, however, my human did a very strange thing: she and her male escorted me to my vehicle, strapped me in to my customary seat, and drove me straight to the hotel reception!

Had fate intervened? It seemed my star turn as the five-star canine of the Pier One Sydney Harbour hotel was meant to be. Destiny had arrived!

Greeted in the manner to which I am accustom

I am happy to personally confirm that The Pier One’s reception is as grand as you might imagine.

Large doors, armed by appropriately formal doormen, open to a space well suited to my tastes: high ceilings, a series of lounges just perfect for napping on, lovely wooden floorboards (in case of accidents, I am guessing, although these are of course highly unusual for a schmoodle such as myself), and several people willing to avail themselves of their ADPL (allocated daily pat limit) with me immediately.

Before I could be shown to my living quarters however, the hotel’s general manager, Kim Mahaffy, insisted on giving me a grand tour, which I suppose was only to be expected seeing as this was to be my new home.

I was pleased to discover that the Pier One has four floors of accommodation, including several new suites with views so impressive they’d make any hound feel like a purebreed – although in some rooms the windows are obscured by enormous, egg-shell-shaped baths, which seems in poor taste considering how unpleasant baths are.

There was also a wonderful large ballroom to be seen, which one can imagine spending several happy hours playing chasies in, and a lovely outdoor pier lined with tables, couches and large umbrellas – perfect for long afternoons spent chasing flies. (This is a particularly puppy-friendly area of the hotel, Kim informs me; in future they plan on having ‘puppy afternoon teas’ here, which may or may not include a doggy beer menu…)

The hotel also has a delicious-smelling area called The Gantry, which is where I suspect all my future meals would be coming from, but we will get to that in a moment.

At this point, I must impress upon you that I was now highly stimulated from what had been a particularly agitative day. The many new smells, and varied sights and sounds had me quite overwhelmed with stimuli. No reasonable canine would hold me to fault for what happened next.

One moment I was on the way to see my new bedroom, and the next… what was that?! A nasty mess on the carpet! Goodness gracious. How did that happen? Naturally I ran bravely ahead, and took shelter under a table around the corner. No, I wasn’t running away, I was waiting for any fellow guests to walk past. So I could warn them, see. One has to think of others in situations like these.

Shortly thereafter, I discovered that my new home was on the ground floor. (All the more convenient for outdoor access, you see.) Sliding doors opened up onto a glorious afternoon filled with sunshine, and all kinds of enticing seaside smells.

Indoors was an enormous bed and I could see tender kangaroo treats, a portable waterproof rug and even a room service menu waiting for me on the table. I felt right at home. Especially when I considered what I had been forced to endure at my old home!

But wait – what was this? My human and her male appeared to be joining me in my new room! I tried urgently to communicate this mix-up with Kim, who was evidently forgetting that I was here to be appointed the new hotel mascot, but she merely patted my head, then departed.

The next few hours passed in a blur. Why was my old human still here? And what was that amazing cheese plate she was munching on? When did my life as a canine celebrity begin? It was all too much. I needed sustenance.

Luckily, room service came not a moment too late, a sensory delight of ground short rib and sautéed fresh farm vegetables served on an exceedingly large white plate. I had some trouble processing the vegetables until my human sliced them up for my delicate jaws, but other than that it was otherwise an exceedingly successful repast.

She and her male also seemed to be enjoying their food, although I fail to see how anything could be conducive to romance with balsamic vinegar on it. What a way to ruin buffalo mozzarella.

Eventually, full of prime beef and lulled by my luxurious bed, I couldn’t help but drift into slumber. And just like that, it was morning time.

It was quite a shock to discover, upon rising, that I was not the only canine in the building. As I sat down with my human and her male for a long and lazy breakfast on the pier (them: an enormous buffet; me: tender kangaroo treats), a miniature cocker spaniel walked past!

Personally I thought she was a little long in the ears, but humans fell over themselves trying to pat her, which seemed a bit dramatic. What was she doing here? And why was no one patting me?

I was forced to ponder this a moment longer, until I overheard the answer. According to one human, with yellow hair, the Pier One Sydney Harbour is actually ‘dog-friendly’. Well, that explained her presence – she was here on a temporary basis. But what about me?

I was quite nervous as the three of us walked towards the reception area, the very same place we had arrived yesterday. Was this the moment? Would I be crowned the new hotel star? Or was I to be sent tail-between-legs home?

I admit my hind legs even shook a little, as my human checked out, and enquired about the in-house canine position. Was it to be filled shortly? And then came the surprising answer.

“Oh no,” the concierge laughed. “We haven’t even started looking! But when we do, it will be a rescue dog, one who comes from a shelter.”

Goodness golly gracious. I took a moment to sadly admire my surroundings, that beautiful hotel, which had become such a welcome, beloved home to me.

I could never compete with a rescue dog. Then again, I suppose, I would never want to. And with that thought magnanimously in mind, my human, her male and I walked out of the hotel, off for a merry day in the city.

I would never be the Pier One dog, I now knew, but I would also never be a rescue dog, and knowing that was A Very Good Feeling. Plus, of course, I could always come back to the Pier One Sydney Harbour, if I so chose to. Which I just very well might.

Every discerning canine need a good holiday every now and then, you know. Especially the famous ones.