Worship the heat at Spice Temple 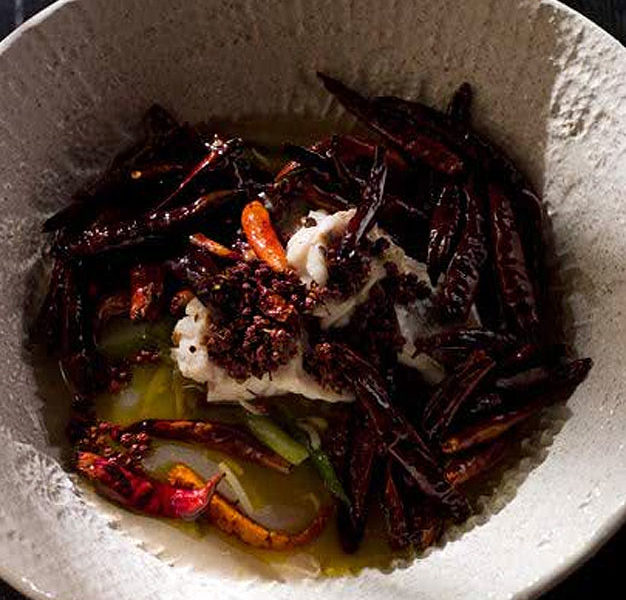 The relationship that Neil Perry’s food at Spice Temple bears to the stuff you order from your local Chinese takeaway is roughly the same as that between a lamington and a Lamborghini.

Be warned (and in fact you are warned, repeatedly, via alarming bright red writing on the menu) that some items are extremely hot and spicy.

Some of the dishes might sound sort of familiar – like spice fried chicken wings with heaven-facing chillies. But then there are the experimental forays into regional Chinese esoterica, like stir fried quail and peanuts with steamed egg custard, described almost paradoxically on the menu as “spicy, crunchy, creamy”.

The modern Chinese restaurant’s name speaks volumes about the almost worshipful respect its menu pays to the dried spices and chillies that are artfully employed to bring out the best in the produce. But be warned (and in fact you are warned, repeatedly, via alarming bright red writing on the menu) that some items are extremely hot and spicy.

An AT favourite is the “Hot, sweet, sour and numbing pork” cooked in chilli, sugar, black vinegar and Sichuan peppercorn. Hot, yes. Sweet and sour, pleasingly so. But numbing? This is taking sophisticated regional Asian dining to perhaps an unecessarily aggressive level, but we love it all the same.

The food is only half the experience at Spice Temple: the dimly lit basement is like stepping into an upmarket opium den; and the strict “100 wines only” wine list is an exquisite exercise in restraint.

Just remember to keep the cucumbers with smashed garlic coming. It’s the only way to put out the fire.

Did you know: Before taking the Australian culinary world by the scruff of the neck and giving it a good shake, Neil Perry trained as a hairdresser, which may explain his stubborn refusal to dispense with his inordinately long ponytail.