The Rebirth of Pub Grub 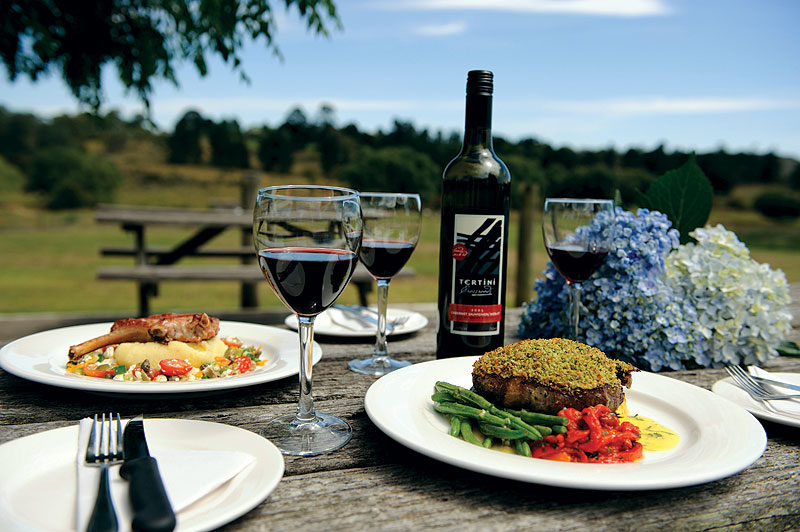 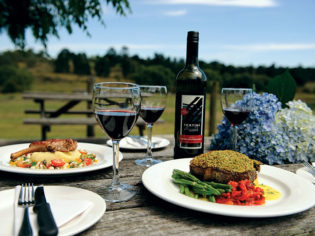 In the cool rolling hills of the NSW Southern Highlands, the reborn Sutton Forest Inn – with its famous new neighbour, one Nicole Kidman – is redefining pub fare one elegant dish at a time. Words by Justin Wastnage, who paid his own way and visited anonomously.

The NSW Southern Highlands has a host of high-end eating options but no real mid-range, convenient alternative to Macca’s – and while eating at the Sutton Forest service station does have its highlights, for most it’s just a handy stopover between Canberra and Sydney. That all changed in June 2008, however, when the Sutton Forest Inn changed hands and Jason Grumley-Grennan, former executive chef at Sydney’s Summit restaurant, took over the pub’s bistro in his first solo venture.

His ongoing vision is to bring the gastropub trend from his native England. “There are lots of great restaurants in Australia and loads of good pubs to drink in,” he says. “But there aren’t many pubs that offer restaurant-quality food.”

The ethos is simple: an unpretentious pub with a bistro menu. The first part is certainly on the money – the Sutton Forest Inn is an unremarkable building from the road and its dark wood and tartan carpet décor date it. These will go in time, says Grumley-Grennan, but his first concern had been to overhaul the menu.

Calling his cuisine bistro is to do a disservice. At first glance an entrée of prawn salad or salt and pepper squid could have been plucked from any pub menu in the country. But when it’s brought out, it’s clearly something different. Spiced prawns are paired with salmon marinated in miso paste and both sit on a bed of delicately julienned paw-paw and cucumber. The mildest of satay sauces with a hint of mint finishes off the dish. These are complex flavours, rather than a mayonnaise-laced prawn cocktail.

The salt and pepper squid is a similar revelation. Rather than the thick and chewy standard pub version, it’s light and crispy, thanks to the use of potato flour. The baby squid is bought whole daily, rather than the frozen tubes beloved by other pub chefs. Further, the squid, which is scattered with shallots and coriander leaves, is proof of the inn’s goal to make basic food taste great again. It’s clearly working; in the six months since taking over, rumley-Grennan saw sales of calamari rise from under a kilo to 25kg most days.

For Grumley-Grennan, who trained at London’s Michelin-starred Lindsay House before working at Sydney restaurants Aqua Dining and Quay, the move to Sutton Forest was something of a sea change. He has also convinced a small band of apprentices to share his new life in the cool rolling hills of the Southern Highlands. The stunning scenery has also attracted an unexpected celebrity in the form of Nicole Kidman, who bought the 1878 Georgian mansion that overlooks the pub’s garden. The $6.5m sale made local headlines, prompting star-spotting locals to reserve spots on the terrace.

As I sat there looking for signs of the off-duty film star, I began to rue my choice of main as the pub’s top sellers drifted by: pies. Gigantic pillows of puffed pastry perched jauntily atop ceramic pots of deep, luxurious beef and Guinness stew.

“There are lots of great restaurants in Australia and loads of good pubs to drink in. But there aren’t many pubs that offer restaurant-quality food.” – Jason Grumley-Grennan

We were wrong to have had any pangs of disappointment. A lamb tajine and chicken saltimbocca made their way to us after a longer wait than would be usual in a fine dining restaurant. The tajine was an excellent twist on the lamb stew staple of Australian pubs, but unfortunately highlighted the limitations of cooking in bulk rather than to order.

It lacked the vibrancy of an authentic Moroccan dish and shards of Star Anise left the dish slightly uncomfortable to eat. Again, the part of the dish cooked fresh showed off the kitchen’s forte, with a citrus couscous with roasted capsicum so fragrant and light that it lifted the entire dish.

Minor issues with rice grain structure aside, my wife’s risotto primavera was almost faultless. The chicken saltimbocca was cooked perfectly, with the saltiness of the prosciutto balancing the sweetness of spring vegetables in the risotto. It was a brave decision not to use sage in the saltimbocca, a herb that makes the dish jump in the mouth, as its Italian name implies.

New twists on old favourites is the key theme at the Sutton Forest Inn. Risotto balls are enlivened with the addition of a beetroot gastric, while fish and chips in Grummley-Grennan’s hands ends up as flathead in Japanese flaked breadcrumbs, served with a homemade tartare sauce so lush and green with capers that it almost leaps from the plate of nearby diners.

Steaks, meanwhile, are served simply with either tarragon butter or a herb and marrow bone crust, letting the flavour of the hormone-free local meat come through. Grumley-Grennan reckons more steaks are sold rare here than at any other restaurant he has worked at.


Some items come and go with the seasons, but many are staples. Sutton Forest now has a decent alternative to Macca’s at a reasonable price. And that alone is well worth the drive.

AT Menu at Sutton Forest Inn