Bowen on the Big Screen 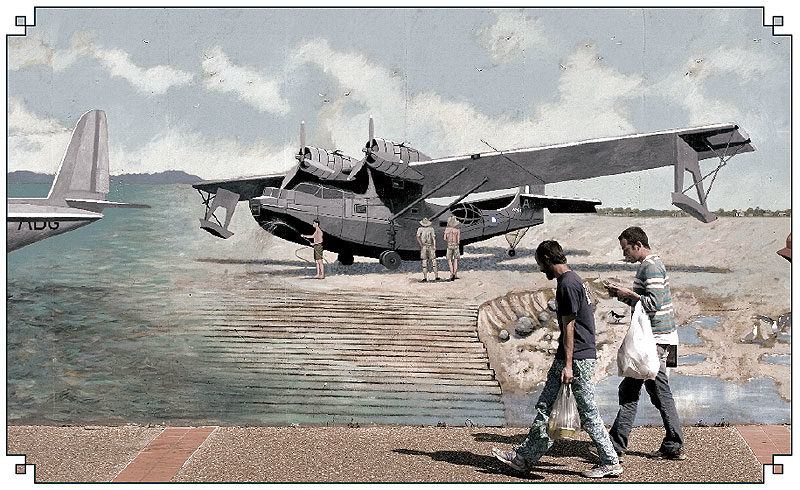 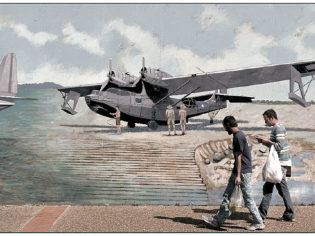 To nail his precious pre-war Darwin scenes, Baz Luhrmann filmed in a small town in Queensland. And as Australia the Movie prepared to debut in cinemas around the country, Mike Larder spoke with the woman who may have single-handedly put Bowen on the map.

It’s a chilly breeze that wafts and eddies across Flagstaff Point, swishing through the tall grasses while inflating and toying playfully with empty chip packets, squashed polystyrene cups and sundry plastic detritus discarded by thoughtful visitors.

A determination to rise early and witness a sunrise over Gloucester Passage, the distant top end of the Whitsunday Island group, is satisfyingly rewarded with the majestic arrival of the new day’s sun. The brooding, shadowy, triple-humped bulk of Gloucester Island dwarfs little Middle Island. A small sloop passing North Head lighthouse heels and punches into a short chop. The distant skipper and I have this glorious morning to ourselves.

The New World Symphony seems appropriate so, humming a few bars, I shuffle slowly in a circle, snapping an angelic dawn vista. To the north is the cute little micro-beach of Rose Bay; to the south the wide, shallow Edgecumbe Bay and Stone Island; to the west a distant range of hills trying to be mountains. Scavenging maggies squabble raucously over scraps of orange peel and sandwich crusts, reminding me that I’m hungry. No matter how visually tasty, you can’t eat the scenery.

While idly masticating my excellent quiche, I find myself staring straight into the ethereal eyes of . . . Nicole Kidman? Yes, the Aussie bird who can act a bit. Not the living, breathing megastar, you understand, but a slightly fuzzy snap of the awesomely famous actress cuddling a sweet-looking young girl.

Blu-tacked side by side on the cafe’s wall are further snaps of . . . yep, that’s Hugh Jackman, another Aussie bloke who can act and sing a bit, rakishly adorned with pieman’s hat and flower-spattered apron, whipping up a batch of Jochheim’s meat pies. And that silver-haired bloke hugging the jolly looking woman . . . isn’t that Baz Luhrmann? Prodigiously gifted Oscar-nominated director of Moulin Rouge, Romeo and Juliet and the unforgettable Strictly Ballroom?

Then the penny, along with crumbs from a follow-up muffin, drop. I’m gazing myopically at the cream of Australian thespian talent stuck to a pie shop wall in Bowen.

My memory kicks in. Bowen had been digitally transposed as Darwin for the filming of Luhrmann’s soon to be released $130 million flick, Australia. To Luhrmann’s critical eye, Bowen’s spacious harbour looked very like Darwin’s circa 1942.

As brag walls go, this is a ripper. The who’s who of Australian theatrical talent, one of them happily baking meat pies aided by an equally flour-dusted son. Just what on earth has been going on here?

Merle Jochheim, the bakery’s owner, settles graciously at my table for a chat . . . and Merle loves a chat. “Well,” she begins, “I saw this guy snapping our streets, and he asked me why they were so wide. I told him they used to run cattle through town to the jetty.”

Merle, proudly and loudly 73, isn’t slow to expound on the many wholesome virtues of Bowen to anyone who’ll listen. Her distant relative, the swarthy explorer Captain Sinclair, discovered the place back in the 1850s. He was offered a princely 200 pounds to find a new Capital of the North. He did, and brought the first white settlers to tropical Bowen. Churlishly, the NSW administrators welched on the deal.

“We talked for ages,” continues Merle. “He was a nice ordinary guy. I told him all about Bowen, our beautiful beaches, the islands, the fishing and wartime history. He was really keen on the old photographs of the flying boats and the clothes on the cafe’s walls. I hadn’t a clue who he was. Didn’t even know his name.”

Hugh was at the bakery on is own one day when a delivery of margarine turned up. “He signed for it,” Merle chuckles.

So it came as a considerable shock to discover her name emblazoned across the tabloid pages of the southern media: PIE LADY SEALS MOVIE DEAL. Luhrmann had slunk away, convinced he’d found his perfect location, describing it as “a paradise for filmmaking . . . the light, the ocean, the climate and the locals. Our cup has runneth over.”

Recognising a windfall when they saw one, the locals threw themselves into the epic’s production with a will. Jochheim’s quickly baked a new line of pastries, thus Hunky Hugh Meat Pies and Baz Baguettes joined the scrumptiously evocative Kidmango White Chocolate Cheese Cake on the menu.

Star struck Bowen had collectively caught the Baz Buzz. And, fortuitously for Jochheim’s, the bakery backed right onto the film set, providing a convenient escape route and coffee stop for the stars during the day’s shooting. On any given day you’d find the convivial Jack Thompson (dodgy accountant, bon vivant and cattle baron) or David Wenham (the cad) quietly contemplating their steaming mugs. Nicole and rocker hubby Keith Urban (joining Nicole to celebrate her birthday) often started the day sipping Merle’s coffee. The rest of Urban’s day was spent cruising the countryside astride his Harley, shopping in Target and, on one memorable occasion, doing a free gig at the local Grand View Hotel.

But out of this dizzying galaxy of movie stardom – including Brian Brown, the mercurial David Gulpilil or the dashingly moustachioed Ben Mendelsohn – it was the lavishly bearded Jackman who caused Merle’s heart to flutter. “My heart was thumping the first time I met him,” she reveals, colouring slightly. “I was shaking a bit. He’s a real Aussie bloke. So handsome. He came in for coffee and gave me $50. But I forgot to give him change!

“Hugh and his family [wife actress Deborra-Lee Furness, son Oscar and infant daughter Amy] were here all the time. Hugh liked baking scones. Sunday mornings were his favourite time. He and Oscar made pies and made Oscar’s grandfather a birthday cake.”

Hugh was even at the bakery on his own one day when a delivery of margarine turned up. “He signed for it,” Merle chuckles. “The bloke’s jaw dropped. The receipt never made it back to the depot.”

Following the demise of the meatworks in the late ’80s, then the closing of the coalmine and the power station, Bowen slumped. Hundreds lost their jobs. The population dwindled. The young were drifting away. Unlike it’s nearby bacchanalian sister town of Airlie Beach, Bowen attracts a more demure, greying and spendthrift clientele, towing their super behind them.

“Any of you blokes picks up a camera and I’ll kick you up the backside,” snarled Merle. Young Kidman/Cruise was left to savour his pie in peace.

Then Bowen found itself morphed into the make-believe WWII town of Darwin, complete with Chinese opium dens, brothels, pubs and an outdoor cinema. Around 12,000 tourists flooded in and cash registers peeped and filled. Bowen’s morale soared. Pie production peaked.

Perceiving correctly that Merle is Bowen’s oracle, Baz and his design team frequently consulted her over historic details. “I became a Miss Know-it-all,” she chuckles. “They wanted to know where they could park 750 head of cattle. They’d spread the designs over the coffee tables and say, ‘Well, Merle, that’s it. What do you think?’

“They were wonderful. They wanted to source everything they could from Bowen. They left the town spotless.” And considerably wealthier. More than four million of Baz’ production dollars stayed in the area. “We had 400 people working here,” says Merle. “We had to figure out what to do with horses, cowboys, movie stars, security, a hundred Thrifty rent-a-cars, caravans, production trucks, demountables and . . .” her voice becomes a hiss. “The paparazzi.”

Ms Kidman’s son by a previous, widely reported marriage (and in town for her birthday) found himself baled up in Merle’s shop by loitering snappers. But the shooters hadn’t reckoned on the young man’s protective septuagenarian minder. “Any of you blokes picks up a camera and I’ll kick you up the backside,” snarled Merle. Young Kidman/Cruise was left to savour his pie in peace.

But it all couldn’t last. The final dramatic scenes were shot. The story depicts Our Nic’ as an English aristocrat (and right spunk) Lady Sarah Ashley, who inherits a Northern Territory cattle station called Far Away Downs. As you do.

The feisty Lady Muck gets the hots for The Drover, hunky Hugh, while pushing a mob of cattle across the Top End. A large herd then stampedes through Bowen. Kidman, in excitingly tight riding breaches, does her British best to rebuff the stampede, assisted by hunky Hugh. Then, sadly for Bowen and future tourism potential, the entire set is blown to smithereens with a breathtaking cinematic whoomph!

That’s a seriously suspect synopsis I’ve given you, but even Merle is uncharacteristically tight-lipped as to the plot. She’s seen the rushes. Merle knows but isn’t saying.

Now, with the movie folks gone, Bowen is left waiting for something else to happen. Waiting for its turn at prosperity, decent greening rain and its epic couple of hours of cinematic fame.

And Merle Jochheim is still waiting for a cheque from the NSW government.