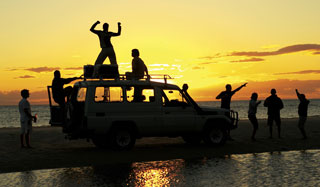 Moreton Island National Park, the geological speed bump in the Coral Sea protecting Brisbane from the oceanic tantrums of Mother Nature, is a natural wonderland. Summer is the ideal time for a visit . . . just watch out you don’t get bogged.

Words and images by Mike Larder

A 4WD or a strong pair of legs and a backpack are essential to explore the island’s more inaccessible delights. Rugged tracks wriggle their way through bush. The beaches are the roads. Take your own vehicle via a two-hour barge journey or hire one on the island. But driver beware: Moreton doesn’t suffer fools gladly. Even experienced 4WD trekkers treat the island with respect.

The imprudent, arrogant and just plain stupid find innumerable ways to damage the island and themselves, sometimes tragically. Intrepid bashers, seemingly freed from the constraints of regulated city traffic – many heedless of commonsense or in ignorance – rip up dunes and desecrate the shoreline. A shoreline where tentacled vegetation claws desperately at the sand to stop the island being devoured by the incessant onslaught of remorseless winds and tides.

Trucks cannot be heard approaching on the beach and many a small child has dashed from behind a parked truck into the path of a speeding vehicle. Over-ending while carelessly hurtling through creek wash-outs (caused by fresh water diluting salty sand, creating a quicksand effect) can end in tragedy for the reckless driver and occupants. Many carefree visitors to Moreton have left as victims. The island may appear benign, but harsh penalties await those who don’t respect her.

Moreton provides unparalleled opportunities to watch nature at play. Sea eagles and brahminy kites hang off the updraughts. Dolphins abound, occasionally hurling themselves off the breakers that thunder into the rocky boulders below Cape Moreton Lighthouse. Turtles bob for a breath of air and a spectacular parade of humpback whales cruise slowly past from mid-June to the end of October. Endangered dugongs still graze in the bay. The sunsets are just plain wicked.

Watch for ospreys, sea eagles, pied oystercatchers, wedge-tails, great flocks of terns and the lumbering pelicans, which – once airborne with undercarriage tucked away – become graceful and elegant feathered jumbo jets.

For those of sound wind and limb, a 320-step, lung-bursting, temple-throbbing clamber to the summit of Mount Tempest (the tallest vegetated sand mountain in the world at more than 300m) is essential. The 360-degree view of the Gold Coast across to Brisbane, up to the Sunshine Coast and Glass House Mountains (first sighted and named by an inquisitive Captain Cook) is awesome.

Tangalooma Wild Dolphin Resort lies on the western beach and is the Indigenous name for where the fish gather. It was also, until 1962, the abattoir for thousands of humpback whales; 6277 of the mighty marine monsters and one blue whale (in the wrong place at the wrong time) were harpooned, their spines shattered from the combined effects of four pounds of gunpowder and shrapnel from the exploding harpoons warhead. They were slaughtered on an industrial basis and turned the blue waters of Moreton Bay into a shark-infested pink slush. Like many of the world’s persecuted species – humans included – the whales took a dim view of being converted into corsets, machine oil and lumps of soap for ladies of refinement and, aided enthusiastically by man, virtually vanished from the seas. The resorts’ museum graphically depicts its unsavoury past and an education centre invites visitors to contemplate the future without such fabulous beasts.

The whales have now returned in numbers, but these days are shot by humans armed only with cameras.

For at least 40,000 years Aboriginals called Moreton Island home. Vast middens (Aboriginal restaurant sites) can be found further down Ocean Beach where WWII gun turrets – Brisbane’s first line of defence – are gradually being engulfed by the giant and ever-migrating dunes. There are mirror and perched lakes like Blue Lagoon with an inland beach, and Honey Eaters Lake where tiny fish will swim up and nibble your body. A very ticklish situation to be in. Sixteen dredges, aka The Tangalooma Wrecks, have been sunk 50m off the beach at False Patch north of the resort. The rusting, semi-submerged hulks provide safe and spectacular shallow dives to 15m. Imagine plunging into a natural goldfish bowl.

Get Wet Sports, adjacent to the resort, provide all diving gear and refills and run daily trips to feed and frolic with the wrecks’ gulping inhabitants. Kissing fluorescent fish is no longer the exclusive domain of Rex Hunt.

Exotic beach houses can be hired, and there are abundant campsites. A shop at Bulwer on the northern end of the island, and another at Kooringal at the southern extremity, provide fuel, ice, grog, provisions and tucker.

Two vehicular barges service the island, along with the resort’s fast cats. The Moreton Venturer departs from the Brisbane River near Fisherman’s Island and lands on the beach just north of the resort and Kooringal. The Combie Trader out of Scarborough provides access to Bulwer.

Be prepared for an audience when first you manoeuvre off the barges. Much amusement is derived by the island’s initiated, who magically materialise to watch the fun as Moreton virgins emerge from the steel jaws of the barge like some Normandy beach landing. In shiny new off-roaders, hermetically sealed against the intrusion of fresh ozone and playful zephyrs that disturb expensively coiffed hairdos, they launch themselves off the ramp, engines gunning, turbos howling, only to find themselves immediately buried to the axles amid ironic cheers from the beach party.

Getting bogged in the soft sand is almost inevitable for the inexperienced that ignore the first law of beach driving: “Put your hubs in and let you’re bloody tyres down, mate!”

The beach is a very lonely place when stuck by yourself with the inexorably advancing tide lapping hungrily around submerged wheels. It can put a real downer on your day.