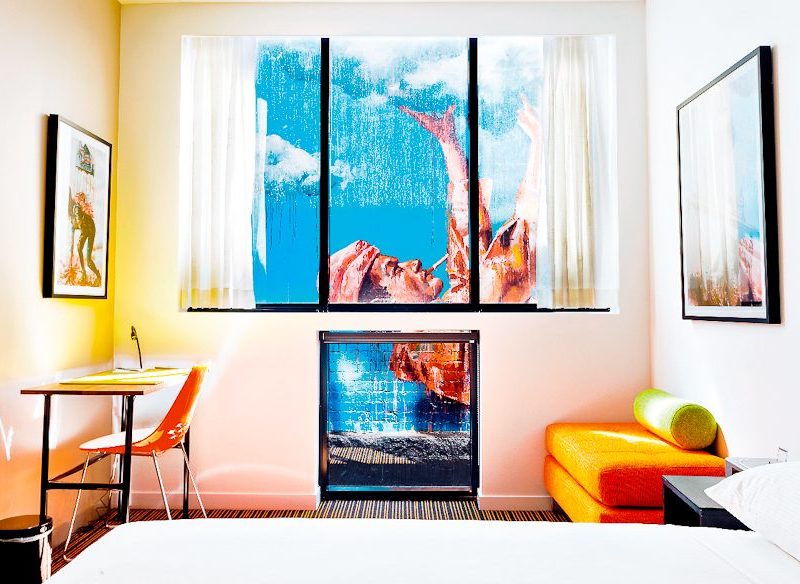 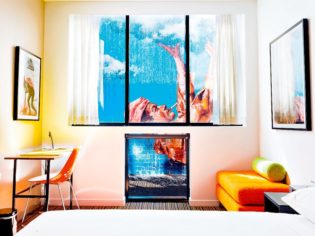 Brisbane’s street art-inspired hotel is a feast for the eyes, but what’s it’s like for the rest of the senses asks Dan Down.

It was while I was staring at the sink’s plug for what must have been three minutes, trying to figure out how to operate the ultra-modern fitting, the room illuminated with a futuristic, ultraviolet glow, that it hit me: this is the most of-the-minute hotel I’ve ever stayed in (and maybe I should turn the full lights on so I can see what I’m doing?).

Half-an-hour earlier I’d gazed up at the brick-faced edifice that is the Wyndham group’s boutique TRYP Hotel, its front emblazoned with the piercing gaze of a woman.

Sometimes an establishment fits so well into its surroundings it’s as if they’re one and the same thing.

Found on an unassuming backstreet of Brisbane’s happening Fortitude Valley, the neighbourhood’s creative fingers have seemingly reached in through the glass entrance and painted the halls and rooms with its 21st century urban aesthetic.

On your left as you enter is a bustling burger joint, filled with young Brisbanites chatting furiously about the live acts they’re seeing that evening, no doubt; on your right an industrial elevator; below the polished surface of 150-year-old wooden floor boards.

And in front, the receptionist, who efficiently hands me a room key in a little sleeve with the same painted face on it that greeted me from the street – it’s fine attention to detail.

As the lift ascends, bare red brick walls glide past, sprayed with different works from street artists, characters who call themselves things like Magee, Numskull, Rone and Beastman. Banksy would love it here.

It’s not immediately apparent why the ‘King with Courtyard’ room is called such. Having flicked some switches to turn on the (optional) cyberpunk ultraviolet lighting, I find a remote.

Pressing a button starts a whirring noise and a large black blind covering one end of the entire room slowly rises. Behind is the courtyard, which is really a massive canvas for a kaleidoscopic mural that instantly fills the room with colour.

I raise and lower the blind several times, caught up in the playfulness of it all before stepping outside. Looking up past the mural reveals several more works towering above, all the way up to the top floor where the hum of conversation from a rooftop bar can be heard.

The room feels like it’s opened up onto a vibrant New York alley.

Back inside, orange furniture, black notes in the fittings and striking lines add a modern, European feel to this NYC vibe – this hotel would fit just as comfortably in the heart of Berlin as Brisbane – and the option to have that pervading UV glow instantly gives it an edgy atmosphere.

Needless to say the various paintings are perfectly considered, while the king-size bed is low-set in front of a whopping TV.

The bathroom, with its rainfall shower, is set off with a custom-made glass basin that’s scrawled in orange and black graffiti (home of the impossible plug).

I head out for a burger downstairs before taking another lift from the restaurant up to the rooftop for cocktails. Here you can look out over the city lights at UP, the latest cool addition to Brisbane’s burgeoning bar scene.

You could spend an entire evening at TRYP, but the appetite has been whetted; the streets beckon.

Verdict: A case of exemplary design, the hotel perfectly sits in its youthful, energetic environment, infused as it is with some of the best local street art talent.

We rated: UP bar’s electric atmosphere, and the wow factor of the King with Courtyard room.

We’d change: Not a thing, we can’t wait to return.

Notes: We paid $209 for a spectacularly dramatic Courtyard room, free wi-fi and that crazy-looking sink.