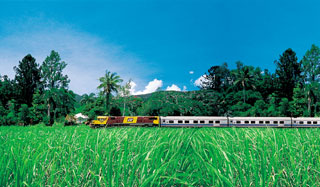 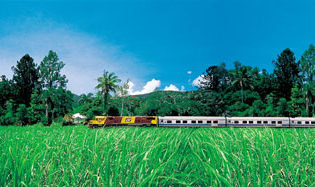 Can train tracks lead you up a food trail? Clementine Ford heads up Queensland’s coast… and discovers a new way to travel by tastebuds

We think of them now as antiquated, but when you’re travelling in style, you really can’t beat the olde worlde lure of chugging along a trusty railway line, sipping on a boutique wine and listening to the hypnotic clicking of the sleepers as they deliver you to another time and place.

Happily, the dedicated tour boffins at Queensland Rail have put together a selection of Masterclass journeys for foodies and travel lovers alike, all of whom may be looking for something a little bit different – a trip combining taste, travel and a step back in time.

I was lucky enough to experience one of Queensland Rail’s unique itineraries, travelling overnight from Brisbane to Townsville as a Queenslander-class passenger on the Sundowner, and then by coach to Cairns for a two-night stay at the world renowned Shangri-La Hotel.

Accompanied by celebrity chef Andrew Mirosch and his colleague/partner-in-crime Adam Chapman (chief winemaker at Queensland winery Sirromet), we ate, drank and laughed our way through sugar cane fields that blazed in the sun, the twittering life of lush rainforests and the unique landscape of Australia’s arid outback.

I’m really, truly on a train. Ably hosted by the Queensland Rail team as well as Mirosch and Chapman, we trundled north on the first leg of our journey, passing towns with the kind of Australian names that can’t help but evoke a sense of connection despite us having never heard of them before. Nambour, where we were joined by Chapman’s wonderfully charming parents; Gympie North, where we alighted and enjoyed an impromptu meal of fresh redclaw to the great envy of the passengers down carriage; Mackay, whose vast sugar cane fields blazed in the Queensland sun.

As the tracks took us further from Brisbane, the atmosphere drew us all closer together. And so it was that, by the time Mirosch and his team began to serve us the first of a six-course on-board degustation, we had all achieved that easy sense of camaraderie. I was particularly drawn to travelling companions Jeanette and Helen, who’d chosen the trip to celebrate both 30 years of friendship and their 50th birthdays, and Elaine, a fiercely independent widow from New Zealand who’d joined the tour group as a solo passenger and provided great intellectual stimulation during that first evening.

As someone who enjoys a tipple more than most, I was tickled pink by Elaine’s equal enthusiasm for Chapman’s wines, each of which had been perfectly matched to the never ending delicacies Mirosch had carefully planned for the evening – treats like red brazed belly with scallops and peanut brittle; the most sumptuous Wagyu beef you’ll ever eat; coral trout with red claw and cardamom syrup; and a chocolate pudding fashioned from, of all things, a vegetable.

Like all wine-paired degustations, part of the great pleasure for me was in learning just that little bit more about which drop complements which food. It’s a skill I admire greatly, but rarely take the time to encourage in myself. In this respect, Chapman’s extensive knowledge and laidback persona made him a formidable teacher, and his rapscallion banter with Mirosch proved to be one of the true highlights of the trip. Their joint ability to put the guests at ease can’t be underestimated: in selecting them to partially host the journey,  Queensland Rail have made an astute and valuable choice.

I’ve never minded the lilt of a train or the creaking of its tracks, so I found my sleep in the Queenslander luxury bunks to be suitably pleasant. With a working shower on board, the amenities proved to be right up there with any luxury sleeper carriage and so there was no cause to pull into Townsville feeling the usual grot of long-haul travel-by-land – a fortunate turn of events, given that our Townsville guide Tony took us immediately to lunch at the Yongala Lodge and then on a civic tour of the town.

In a trip of otherwise soaring highs, this was probably the least well executed. As enthusiastic as Tony was – and ne’er a finer fellow did I meet – there just doesn’t seem to be that many ways you can make a civic tour of anywhere exciting.

After 24 hours in confined space, it would have made more sense to allow passengers some free time to stretch their legs – perhaps even explore the ridges of Castle Hill, rather than simply enjoy the view as was all we were able to do. As it was, we had a skerrick of free time before making our way to The Brewery restaurant, where we enjoyed a pleasant but unremarkable meal paired with some admittedly delicious boutique beers.

It became rapidly clear early on day three that we were about to hit some seriously lush Far North Queensland territory. Winding our way through the first of many rainforests, Tony took us first to experience one of the gobsmacking waterfalls before stopping for lunch at Hidden Valley, an eco-retreat built from the ground up by its owners Ian and Bonnie McLennan and powered entirely by solar panels. Nestled in the heart of the valley, this is the land we associate with Australia, and there’s a stillness to it that speaks to somewhere deep within. Take a moment to enjoy it.

As we took that final leg into Cairns, the humidity of the far north descended on us. Southerly dwellers will understand that bone- chilling cold that drives up from the Antarctic. The closer we got to Cairns, the more I felt my interior thawing out. And I’ll be honest – it all but mellowed completely when I caught my first glimpse of the hotel room at the Shangri-La.

I can’t be the only one who immediately ran a deep bath that afternoon, and cracked open one of the complimentary bottles of Sirromet Viogner that Queensland Rail had provided.

Demonstrating some fairly keen insight into the nature of longish tours, Queensland Rail thoughtfully earmarked this as a free day. Cairns itself is fairly unimpressive – if you’ve seen one coastal city, you’ve seen them all – but its outer environs are outstanding. I recommend hiring a car and exploring it, which is exactly what some of the single women (who felt of course like life-long friends by now) and I did.

Indeed, if you’re looking for something a little different to do with your lady friends that leaves the planning to someone else, I can’t really recommend this highly enough. If I were Queensland Rail, I would begin marketing it to discerning women looking for something different and destination-y, as a hens party option. The beauty of Josephine Falls or Lake Barrine are the perfect backdrop to create lifelong memories, and who better to share them with than your girlfriends?

The benefit also of a day traipsing around the rainforests, as my erstwhile companions and I discovered, is that you’re abundantly full of Vitamin D by day’s end and naturally blissed out to enjoy the pièce de résistance of the tour: The culinary Masterclass.

The less said about the Masterclass the better, because it should remain a surprise. Suffice it to say, the location of a picturesque train station set against the misty backdrop of the cane fields more than delivered on the promise of old-school romance.

Mirosch is a generous and warm host, and he actively encouraged his guests to participate not only in the process of the seven-course meal but also the preparation. By now, the easy rapport was well and truly established, and it felt a little like a get together of old friends and family members who don’t hate each other.

A stunning end to a stunning day, capped off by the remarkable knowledge of Chapman and the rambunctious chemistry he and Mirosch share.

Of course, all good things must come to an end, but Queensland Rail made that end just a little less bittersweet with one final touch: a trip on the original Kuranda Scenic Railway.

Through crawling rainforest and breathtaking panoramic views, we made our final excursion up to the village nestled in the tropics before returning to ground level on the almost heart-stopping cable car line. You haven’t really lived until you’ve dangled hundreds of feet above a canopy of trees, digging your fingernails into the arm of your companion who barely registers it because her eyes are squeezed shut.

Terrifying and mesmerising, yes, this slow and wide open descent down a mountain. But most of all a fitting way to say goodbye, both to the landscape and to the people we’d all been fortunate to share it with…that little touch of nostalgia, that little whisper of the past.

Hire a car. Early. There’s a lot of ground to cover, and you want to get as much of it in as possible. Here are the best five things you can do with your day. You won’t get to do all of them,
but by gum, you better do at least one.

Around an hour’s south of Cairns, Josephine Falls is a once in a lifetime experience. Not content to nestle in amongst the rainforest and feature breathtaking falls, the main attraction also has a natural water slide built into its face from millions of years of falling water. Inch your way to the top, daring yourself to go higher each time before plunging down the rockface into the fresh water below.

Larger and more touristy than some of the smaller falls, Mossman is still a sight for sore eyes. You’ll have to access it by bus, which leaves from the new visitor centre.

Hey, waterfalls aren’t for everyone. If you’re looking for a pretty town to have some lunch in while the beautiful flock around you to play, look no further. It doesn’t hurt that there’s a real holiday atmosphere about the place, either.

One of two natural freshwater lakes found in the Atherton Tableland, Lake Barrine offers swimming, nature walks and a genuine teahouse on its shores.

Stick closer to home and visit the Great Barrier Reef for a snorkeling adventure. Book ahead to save time.

Queensland Rail Masterclasses start from $1995 per person, including all transfers and accommodation plus a hefty proportion of your food and wine. You’ll also need some pocket change to cover any urges to go shopping.

Tours depart from platform 10 at Roma Station in Brisbane. Simply show up, and let them do the rest!

Each Masterclass tour visits a different destination. There is no other tour to Cairns scheduled, but you can take a tour to Hervey Bay (departing August 10) or Hamilton Island (departing October 18). Visit the Queensland Rail website at queenslandrail.com.au to book.

Meals are cooked and prepared on-board, so you’ll need to let Queensland Rail know of any dietary requirements in advance.