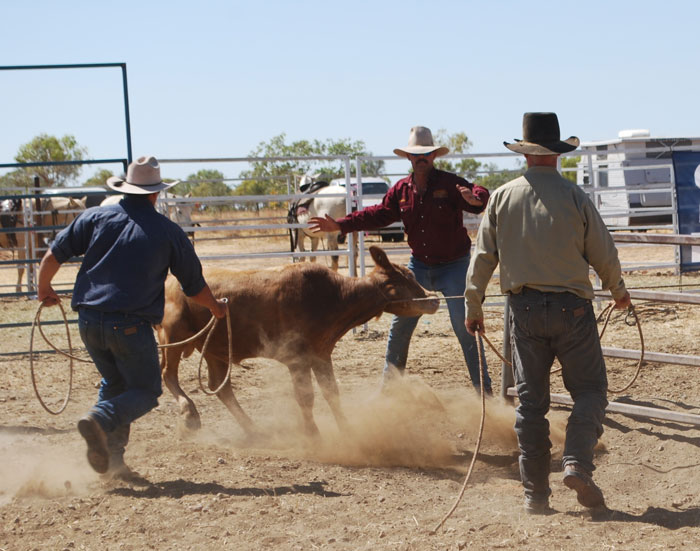 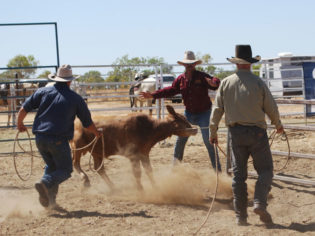 The Drovers muster festival in Camooweal, now in its 14th year, is an initiative by the Camooweal community and aims to preserve the history of droving.
But what do drovers really do? They don’t all resemble Hugh Jackman but they’re stockmen, moving livestock from one place to the next.
They deliver stock to markets or move animals away from drought stricken areas to ensure better feed and water conditions for the herd.
A good drover needs to be independent, an excellent rider and be able to manage stock as well as other members in his team.
No easy feat. If you are already impressed with the skills a drover needs to posess, you will be blown away by the fact that a standard team moving 1,200 head of cattle, would only consist of seven men.
The heydays of droving were probably the late 1800s, when Robert Christison moved 7,000 sheep from Queensland to Adelaide.
The most famous stock routes to date include the Birdsville Track, Strzelecki Track, Mrranji Track and of course the Canning Stock Route, which was regarded as the loneliest and most difficult one.
It’s probably also safe to say that the most famous drover of all times is Nat Buchanan, who in 1881 took 20,000 cattle 3,200 kilometres from St George in Queensland, to Daly River near Darwin in the Northern Territory.
With the introduction of rail lines and growing popularity of other transport in the 20th century, droving declined massively. Still, to this day it is well entrenched in the Australian culture and what better way to celebrate this iconic Australian trade than at the Drovers Camp in Camooweal this August.
You’ll enjoy three fun filled days with activities including a street parade, bronco branding competitions, horse racing, drovers’ breakfast a Musical Spectacular and of course the Drovers’ Ball.
Festival President Liz Flood says they expect at least 100 drovers to come to the festival.
“The festival is offering travellers, tourists and visitors a once-in-a-lifetime opportunity to meet a real drover, see the skills they used driving and handling stock, and hear the recall their stories on the weekend,” she says.
What //
Drovers Muster at Camooweal Festival
Where //
Camooweal, Queensland
When //
From August 20 – 22, 2010
Contact //
www.droverscamp.com.au
How much //
$5 for the festival, tickets for the Drovers’ Ball are available at the door