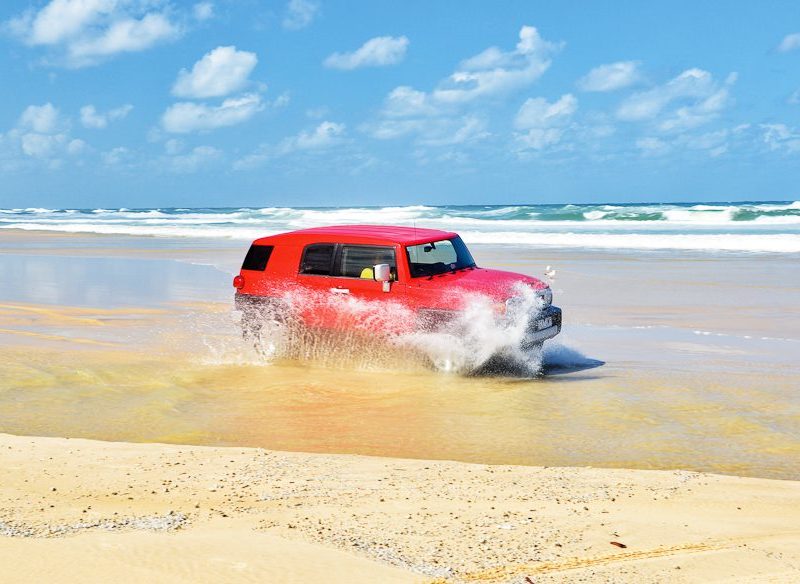 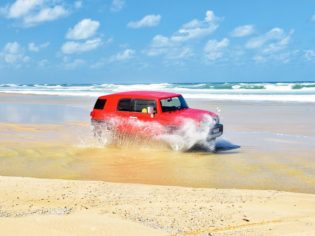 Celeste Mitchell lets the tyres down for a weekend off-roading on Fraser Island; it’s time for the girls to re-take the wheel.

Joined in unison by my ‘co-pilot’ I repeat the mantra over and over again: “No clutch, no clutch”. Less Maverick and Goose, with our necks craned forward trying to see over the bonnet we’re more Blanche and Dorothy from The Golden Girls.

We’re facing ‘the jump-up’, a menacing mound of earth masquerading as a small, sandy hill, which I need to drive up and over in one of the first challenges set during my first attempt at four-wheel driving.

I check the gearbox once more to ensure I’m locked in low-range and hear instructor Dave’s words echo through my head: “If you feel like you’re not going to make it, just forget you’re in a manual. Hit the brakes and stall it. If you go for the clutch you’ll roll back straight into those trees.”

Great. Why did I write ‘manual’ on my sign-up form?

I’m here along with 10 others on a course called Girls Got Grit, but right now I’ve realised it’s more Nanna’s Got Grit in the Nissan Patrol.

Girls Got Grit: Training begins at the The Australian Offroad Academy.

We’re being put through our paces by Australian Offroad Academy on a custom-built four-wheel-drive training track within Kingfisher Bay Resort on Fraser Island.

A series of tight corners, bumpy ‘wombat hole’ tracks and challenging hills, the course is like cross-fit for 4WDs and built specifically for novice drivers to give you the motivation and confidence required to tackle Fraser’s sandy inland and ‘beach highway’ tracks.

I hit the accelerator with enough force to at least look confident and we make the climb swiftly and smoothly, letting out nervous laughter as we bounce onto flat land at the top.

“Ready?” I later check in with Mel, my damsel in distress, bogged in ‘Eunice’ the ute behind me. We have the snatch straps in place and everyone else is well clear after being skilled up on the importance of a safe tow-out recovery (not just because I’m behind the wheel, thankfully). “Let’s go!”

Mel calls back over the walkie-talkie, and with one small protest from my undercarriage, Eunice comes rolling out of her burrow to the cheers of our group.

Girls Got Grit is a new two-day package designed to take females out of the passenger seat and give them the keys to Fraser Island.

Within a few hours we’ve become bona fide pros in PSI, low range vs high range, and the merits of max tracks (nifty little ramps to get you out of soft sand situations).

“We found 90 per cent of bookings [to the island] are made by women but they always leave the driving up to their partners,” Dave tells us over morning tea, served out of the back of his dual cab on a custom-built shelf replete with organic coffee and gluten-free friands.

We may be dubbed ‘the nannas’ by the rest of the group, but my friend and I soon find the groove – or should that be bounce – as we cruise down Kingfisher Hill on our way to Lake McKenzie. (Pack a sports bra, ladies.)

The girls cooling off in Lake McKenzie, Fraser Island.

The inland tracks have a speed limit of 30 kilometres per hour, but for the first couple of hours I’m lucky if I crack 15. While each corner reveals a new challenge, it’s soon followed by a fresh burst of confidence.

Dave puts in a word to oncoming vehicles (tracks are one lane but two-way) who wait patiently for our convoy to pass.

Being close to the back of the group, seeing mouths agape in the windows of our chivalrous oncomers after being passed by six female-filled 4WDs gives us a good laugh.

After a cool down with a swim in the beautiful freshwater lake and a driver swap, we venture deeper into the centre of the island to Central Station for a refuel with tea and Jaffa cake.

Here ancient cycads and towering kauri pines coat us in the dewiness only a rainforest can provide.

Into the forests of Fraser Island.

The next day we burn up 75 Mile Beach – a gazetted highway with a speed limit of 80 kilometres per hour – with the road trip playlist cranked, stopping for photos at Eli Creek and the Maheno shipwreck.

I almost have to pinch myself while cruising along with the wild Pacific Ocean lapping to my right and a pair of dingoes running in front of the dunes to my left. The sand under the wheels soon feels more natural than driving on bitumen back on the mainland.

While the last 48 hours have seen the 11 of us graduate as 4WD pros, having Dave keep an eye on tide times, clue up the oncoming traffic and pile us with snacks – and sunset Champers once the driving for each day is done – has made for the ultimate self-drive apprenticeship.

Any initial nerves have been obliterated and the laughs, high fives and walkie-talkie banter will stick with me for life.

Driving home on the highway once the ferry docks on Sunday feels incredibly dull. Where’s a ‘jump-up’ when you need it?

Getting there: The Kingfisher Barge terminal at River Heads is a four-hour drive north of Brisbane. Virgin Australia flies direct from Sydney to Hervey Bay while QantasLink has daily flights from Brisbane. Coastal 4WD Hire rent vehicles from $195 per day with a minimum three-day hire. Vehicles can be delivered to Brisbane or the Sunshine Coast.

Playing there: The Australian Offroad Academy’s Girls Got Grit package includes two days of driving on Fraser Island, instruction and guiding. You also get one night’s accommodation at Kingfisher Bay Resort, a night at Eurong Beach Resort and all meals for $635pp twin share or $857 single.

Staying there: Kingfisher Bay Resort hotel rooms start from $188 per night, and there are also villas and beach houses that sleep up to 13 people.