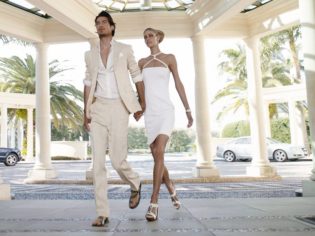 The 12 things you probably didn’t know about the Gold Coast.

It’s where Australia’s celebrated beach culture was born, where bikinis originated, board shorts began and inventive beach entrepreneurs dreamed up creative ways to make a living by the sea . . .

1. The area we know as the Gold Coast was known as “Yugambeh” country to Australian Aboriginals. Local family group the Kombumerri people were renowned for their hospitality, welcoming neighbouring clans into their lands when native foods were in season for feasting and ceremonies. The area where Coolangatta airport now lies was once an enormous camping ground for clans to meet and celebrate.

2. Surfers Paradise used to be called Elston, and got its new name from a pub in 1933. The first Surfers Paradise Hotel was opened in 1928 by a visiting Englishman, Jim Cavill, who once swum the English Channel. It was burnt down and rebuilt in 1936. It featured a small zoo, a honeymoon suite in a tower, and offered guests camel rides to the beach.

3. Until 1959, the Gold Coast was known as the South Coast and was mainly a weekend holiday spot for visitors from Brisbane. The new name stemmed from the first great real estate boom on the Coast, and newspaper articles about “The Golden strip of the South Coast.”

4. Australia’s first bikinis were designed and made in Surfers Paradise in the ’40s by Paula Stafford, who started out making swimming costumes for her four children. The swimsuits soon caught on for adults, and Paula was struggling to keep up with demand. Local authorities tried to ban her revolutionary swimwear. When a girl wearing one of her bikinis was ordered off the sand by beach inspectors, Paula organised five girls to return the next day and invited the mayor and chief of police to attend and judge whether there was any threat to public morals. Surfers was soon the bikini capital of Australia.

5. Currumbin Bird Sanctuary began its life as a corner store, where shopkeeper Alex Griffiths fed the birds bread and honey each afternoon. He soon realised more people were coming to see the birds than shop at his store and so the Bird Sanctuary was born. Griffiths, through the National Trust, bequeathed his property as a gift to the people of Queensland.

6. Local character “Sharky” Jack Evans operated his popular ocean baths at Snapper Rocks in the ’50s and ’60s, until one morning local fishermen the Boyd Brothers netted a pair of dolphins and released them into Jack’s pools as a joke. A popular tourist attraction was instantly and inadvertently born. Jack soon moved his Porpoise Pools to larger premises around the corner at Duranbah. The attraction thrived until the ’70s when Seaworld opened at Southport Spit, overshadowing Jack’s business.

7. Hotelier Bernie Elsey staged his notorious pyjama parties at his Beachcomber Hotel in Surfers Paradise in the ’60s, which were regularly raided by police enforcing an archaic law that prohibited the selling of alcohol where dancing was conducted.

9. Beach photographer Fred Lang started a business shooting holidaymakers on the beach, then opened a studio with the slogan: Today’s photos today. The first morning he opened his doors, he was swamped by tourists wanting to buy a memento of their holiday.

11. In 1973, a young surfer Gordon Merchant and his then-wife Rena began cutting out board shorts on the kitchen table of their rented Gold Coast apartment. A little over 30 years later, their label Billabong is a booming global empire, with annual sales well in excess of $600 million.

12. At various times over the past century, Gold Coast beach entertainment has included: biplane joy flights taking off and landing on the beach, the landslip beach yacht (a plank of wood on wheels with a mast and sail that reached speeds of up 60 km/h), camel rides, surfing catamarans, jazz bands, sand garden competitions, pillow fights on logs, surf-o-planes and surfboards for rent, andGreenmount’s famous “Hokey Pokey” dance. In the ’30s, there was even an open-air dance floor, Rosie’s Roof Garden, on the top of Burleigh headland.