Out & About in Longreach, QLD 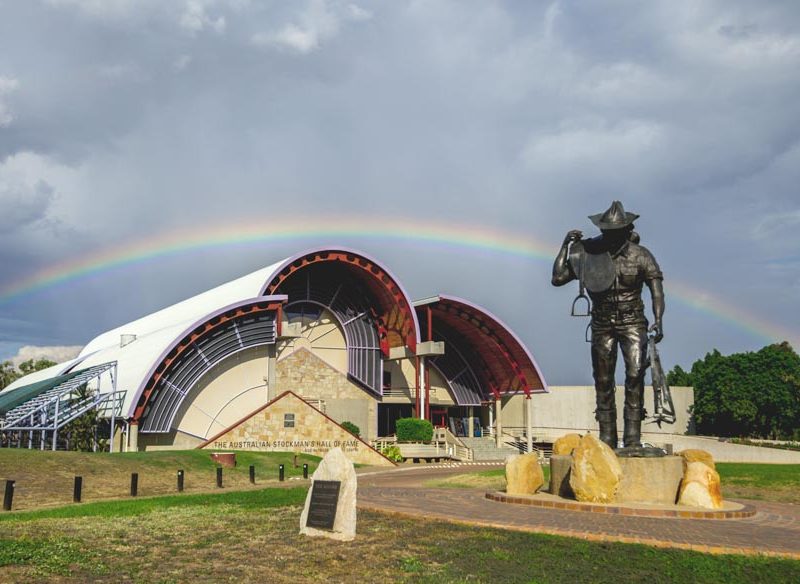 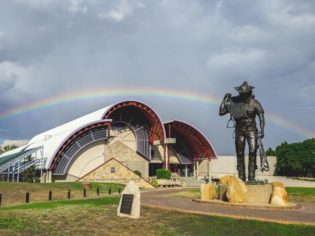 Backpackers in Longreach, laden, fatigued and seen peering hopefully at their Lonely Planets for salvation, are probably lost. For now, Longreach is off the backpacker trail. Grey Nomads, towing their superannuations behind their SUVs, are Longreach’s staple. But the town is extending its airport to accept jets, so once irksomely high airfares are dropping. Backpackers, Longreach hopes, will follow. It’s a long hike by car – around 14 hours from Brisbane or 24 on the twice-weekly long-haul train, The Spirit of the Outback.

Busy and manicured, Longreach, centred at the junction of the Landsborough and Matilda Highways, is well served by comfy motels, budget pubs and a recently refurbished caravan park – The Discovery.

The somnambulistic pace of life amps up during the cooler season from March to October, when the light becomes sharp as shattered crystal, and the air crisp and muskily tangy now that the breathless summer heat has abated.

Local folklore has it that once you’ve crossed the Thomson River you’re fated to return to this place, where you can sit around a gidgee fire and peer into the infinite heavens while listening to the deafening white noise of silence. It’s at this moment that someone, inevitably, farts.

“Be damned to the doubters,” bellowed the exhilarated octogenarian Arthur Kennedy as he soared breezily over the vastness of Queensland’s central western black soil plains. The place was Longreach. The year, 1922.

The plucky bewhiskered Scottish squatter made his famous utterance over the racket of Qantas’ first newfangled flying contraption, and was the fledgling airline’s first paying passenger. Happily, he lived to relate the experience. Eighty years later, Qantas, unlike Mr Kennedy, is still a going concern and the extraordinary heroic tale of The Flying Kangaroo is celebrated by the shiny Qantas Founders Outback Museum.

Kennedy’s faded ticket still exists and is reverently ensconced within the aerodynamic megabuck complex incorporating the original iron hangar. In what could be Australia’s most iconic tin shed you’ll find a replica of Qantas’ first stringbag, an Avro Dyack, as well as a DH61 Apollo, Qantas’ first aircraft with a dunny.

The decommissioned Jumbo City of Bunbury (a real workhorse – you’ve probably flown in it) dwarfs the complex, as does its daintier sister ship, City of Canberra (Qantas’ first Boeing 707, which pioneered the Kangaroo route to America).

Smaller replicas orbit the central display. Sir Hudson Fysh and his doughty colleagues come alive via touch-screen displays, art galleries and a plethora of costumes and relics. Fine dining with round tables and crispy white tablecloths beneath the stars and the ghostly fuselage of a refurbished Qantas Empire Airways DC3. Biggles fanatics will love it.

The Thomson isn’t a river at all, until it floods. Otherwise the meandering billabong provides the locals, wildlife and visitors alike with an aquatic, if muddy, waterway. They also drink a sanitised version of it. Plenty of alfresco campsites. Great Yellow Belly and yabbie fishing, No, there aren’t any antisocial crocs.

Evenings are enlivened by a cruise aboard the tiny Thomson Belle paddle wheeler that thrashes up and down the river at sunset. Bring your own adult cordials for refreshment. Nibbles provided, so long as you’re quick. Not a wise idea, however, to all rush to one side at once chasing the last skewered morsel of cabana, cheese and pineapple. Dinner (in the shape of stew and damper) and pudding follows, along with a singsong, bad jokes and ludicrous kookaburra impersonations. But, after a few beers, anything sounds funny.

A tad more upmarket is the Longreach Explorer cruise. They do a Drovers’ Extravaganza Dinner. It’s onboard dining with entertainers and – yep – bush poets. The “bush gourmet” evening begins with a “mystery tour” of the local floodplain, arrives at a well-known “secret” location where famished punters wallow about on the languid Thomson sipping a smooth red with (depending) ’roo, croc, emu or camel on the menu.

Here’s where you get to clamber over a wool baling machine and learn how to shear a bored sheep that’s managed to avoid being converted into mutton chops. Spin wool and yarns and guzzle tin mugs of the inevitable smoke-flavoured billy tea and damper oozing with syrup. The outback enjoys a talented oversupply of bush bards and whimsical humorists, and if you’re lucky, the venerable shearer Alan Blunt (aka Banjo), a small bush legend in his own right, might feel well enough to do his woolshed yarns, verse and practical and sometimes very silly recreations.

The Longreach cattle sales, held every Wednesday, wouldn’t be of interest to vegetarian travellers or animal rights activists. But for the carnivores, the hurly burly of one of Australia’s busiest beef markets provides a smelly insight into where your sirloin, rump or McFastburger comes from.

It’s okay to just bowl up and watch (although safer to do a tour), as long as you stay out of the way of bellowing, defecating bullocks with no future, triple road trains (a must see for large-truck enthusiasts) and the unintelligible babble of the auctioneers.

10km west of Longreach on the Cramsie/Muttaburra Rd, held every Wednesday.

In excess of 130 species of wild, indigenous and migratory birds flap about the central west. Arm yourself with a pair of “bring ‘em nears” and go for a walk with Shoeless Scotty, a diminutive chap who saves a fortune on footwear simply by not wearing any. Scotty is an acknowledged natural history authority on anything that flaps, crawls, slithers, hops or scuttles and inevitably will break into verse or song at the drop of his battered bush hat. Longreach boasts some wonderfully squelchy wetlands, tranquil lily ponds and slimy swamps – as well as an abundance of wild critters. Scotty included.

The Australian Stockman’s Hall of Fame and Outback Heritage Centre is a striking, angular, stone, metal and timber structure inspired by artist Hugh Sawrey and the now-deified barefoot bushman RM Williams, and was declared open in a very plummy voice by Her Maj in ’87. Venture into its dark and cavernous interiors and five reverently themed galleries for sound and light shows, audio visuals, libraries, interpretive exhibits and touchy feely recreations to discover firsthand just what our plucky predecessors endured while opening up Major Mitchell’s golden “vision splendid”.

It once took three months staring at a carthorse’s bum just to get there. Much quicker these days in a daily flying armchair (aka a two-hour flight by QantasLink Dash 8 Q400 from Brisvegas).

Best fun is Rusty Frame’s RM Williams Outback Stockman’s Show. Rangy Rusty is the genuine article and spent his life encouraging cranky beasts with sharp horns to do his bidding. He’s an expert horseman, raconteur – and trainer of trotting ducks, a thespian mule, a flock of compliant sheep and squad of niftily swift cattle dogs.

On the eastern edge of Longreach, opposite the Qantas Founders Outback Museum, (07) 4658 2166, www.outbackheritage.com.au