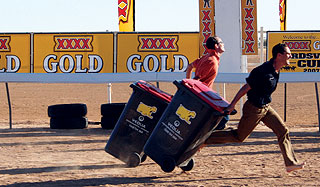 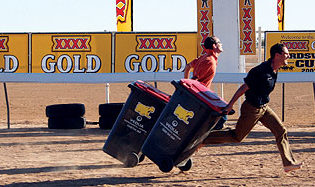 AT Reader Ian “Rocky” Rockwell leads tours to the outback, his favourite of which is to the famous Birdsville Races. But in 2007, rampaging equine flu saw the races declared a horse-free zone. That didn’t stop Rocky. He went. He saw. And boy did he conquer . . .

It was 5.30am when I took off to pick up my clients (Phil, Mary Ann and Fiona) for my favourite trip of the year, the Birdsville Races. Unfortunately there was a special news report on the equine flu epidemic. It was everywhere.

I decided then and there that I’d do a little more on this trip to make up for the disappointment. I was going to be involved in everything. After a couple of days travelling through Bathurst, Dubbo, Burke, Cunnamulla, Toompine and Quiplie, we arrived at Windorah for one of the best nights of the tour – the International Yabbie Races. We pooled our money but were still well short of the necessary funds to get a decent racer. I rushed around and found some innocent bystanders who were keen to join our syndicate. The second race came, The Thompson Trot. We bought No.7 for $500. The yabbies were put into the stalls and our excitement grew.

They were off. Ours was very slow to start. I thought we must’ve bought a dead one. After about 30 seconds or so of playing dead, No.7 popped its head up and started inching towards the finish line. The crowd of well over 1500 people were all shouting and screaming for their respective yabbies. Encouraged by this, our little racer sped up and went straight for the finish line. A minute later and with no voices left we’d won the race, much to our delight. We collected our prize money, but more importantly our certificate and trophy.

The next day it was off to Birdsville. The town was abuzz and more people were arriving every minute. They had all the usual entertainment out there; the pub, whip cracking and Fred Brophy’s famous boxing tent. The last of its kind in the country, to me this is just so truly Australian. As the drum sounded, people poured from the pub and everywhere else to see which crazy onlookers would be stupid enough to climb into the ring and take on Brophy’s highly trained boxing team. After his usual announcements and introductions, the call went out to the crowd: is anyone out there brave enough to step forward and fight?

This was the moment of truth. I decided to step up. I’d been in the tent to watch before and always enjoyed the atmosphere and entertainment. I climbed the ladder to the top and stood on the platform high above the crowd with a few other brave souls. Suddenly it didn’t seem like such a good idea.

Fred called me to the microphone for an introduction. Now, because of my Rockwell surname I’ve been called Rocky all my life, so you can imagine Fred and his boxing crew when he asked my name. He chuckled. The crowd roared. He then said, “Okay . . . Rocky,” chuckling again. “Where do you come from?”

“New South Wales,” I said. He just chuckled again. He warmed to me a little when he asked what I do and I told him I was a tour operator who brought people out to the races and always encouraged them not to miss Brophy’s famous boxing tent.

After the introductions, Fred paired each of us with a fighter of roughly the same weight and height. This was certainly a very rough match up. I looked down the line of fighters and saw mine wave at me with that look in his eye. It was a young fella in the prime of his life. At 35, he made me feel pretty old.

The three punters before me were beaten in fairly ordinary yet entertaining fights, then my turn came. As the bloke before me handed over the gloves he said, “Be careful, mate . . . it’s real.”

I took my shirt off and slipped on the gloves. Some bloke rubbed Vaseline around my eyes, sprayed me with water and said, “Keep your hands up.” I looked at him as if to say, “And? Is there anything else?”

The bell rang. Even though “keep your hands up” kept running through my head, I don’t think it was more than 30 seconds into the fight when thump, I was sitting on my backside. I shook my head like they do in the cartoons, got to my feet and fumbled my way to the end of the first round. I was obviously still in Disneyland because, when the bell went, I walked to the wrong corner. I remember thinking, “What’s the other fighter doing here?” The crowd were killing themselves laughing. At the time I didn’t see the funny side.

My corner man sprayed me again and I started to get my bearings back. Okay, I was ready. I didn’t get hit again, and in fact got stronger during that second round. At the start of the third and final round the crowd was deafening – all for me – and I didn’t hear a thing after the bell. We went at it pretty hard and I felt even stronger, even sending him back a few times. The final bell rang and my senses switched straight from survival mode back to normal. Again the noise of the crowd rushed in. When the decision came, it was a draw. The crowd weren’t pleased as they thought I’d won. I didn’t really care. I’d survived.

The next day would normally be the Birdsville Cup, but in the absence of any horses I went to the organiser and asked what on earth they were going to race. He looked at me and said: “We are racing wheelie bins.”

Fair enough. That seemed worth the entrance fee of $5, so I paid up. There were to be four heats, then the final – top two from each heat to go through. I was drawn in the first heat and immediately felt the nerves begin to grow. (I’m pretty competitive.)

The stalls were around 300m from the finish line, so that’s how far we had to run. It would be the first time in history (and probably the last) that the Birdsville Cup had humans racing each other while dragging wheelie bins – and I’d made the final.

The crowd came from everywhere to line the track along the straight where we’d be running. We were in the stall for a while and, since the track itself is on a claypan alongside sand dunes, the main discussion among the racers was whether to run barefoot or in shoes. I was talked into bare feet and we got ourselves ready.

The starter came up and had us off and racing. Just like a horserace, there were bolters and people jostling for position. The pace was frantic and I was a little behind the leaders. As we approached the one-fifty I thought I’d better make a move. I knew there was more at stake than just the $150 prize money. I moved forward slightly and with about 70m to go I knew it was all or nothing. I felt like I was flying, my bin rattling and bumping along behind me on the clay pan. I swallowed up the leader with about 10m to go and lunged at the line to win in a very close race.

Again in my tour uniform, many people recognised me from the Yabbie Races, the boxing tent and now the Birdsville Cup. Everybody was congratulating me like I was a famous jockey. As I strolled quietly back up the straight to get my boots on, I realised I’d probably be the only human to ever win the Birdsville Cup.

The next day everybody packed up and headed off in different directions. A lot of people had farewells to make as friends are formed easily in the outback. We headed down the Birdsville Track and across to Innamincka to explore the Bourke and Wills story and cruise Cooper Creek at sunset.

After a couple of days we headed for Camerons Corner, going straight through the dog fence and making our way to Broken Hill before heading back to Sydney via the Blue Mountains.

It was certainly the year of the Birdsville “No Races”, but it didn’t spoil our fun. For me it’s not so much the things or the places in the outback, although I find them so enchanting, but it’s more about the people and the experiences.

I love taking people into the outback and have them come home appreciating the experiences I’ve given them and the people they’ve met – real Australians living every day with that great Aussie spirit.