City Slickers: Outback muster to end them all 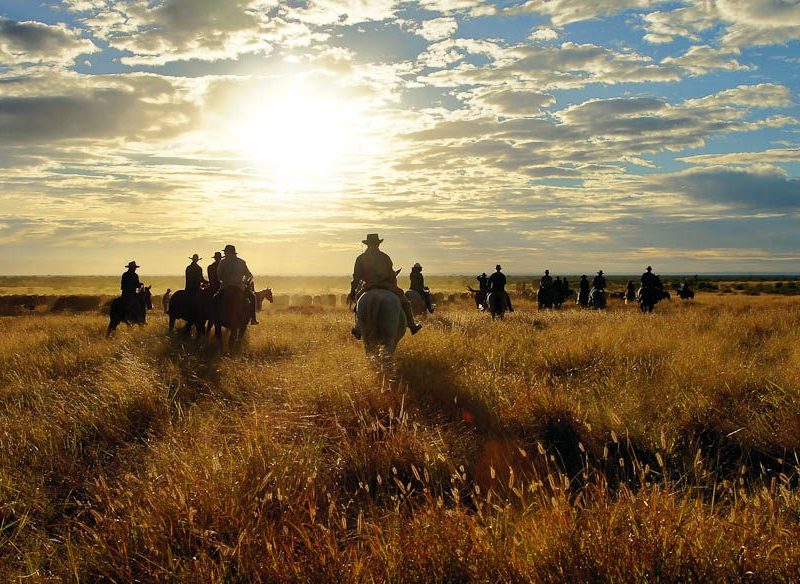 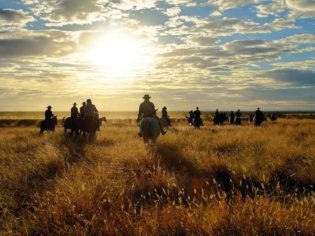 Chook’s the bloke who hands the orders out round here; he could do with a new set of front teeth but he’d sooner keep droving till he drops, like his father before him, than start late on any modelling career. “Let’s get one thing clear,” he says from the corner of a mouth that’s never wasted a single word.

“The order of priority round here goes like this: me cattle first, me horses next, then people. Any of you need resuscitating, you can bugger off, I’d rather save me last breath for me horse.”

Roll on up, ladies and gents, to the one and only Harry Redford Cattle Drive, the last muster of its kind in Australia. Should you dare climb aboard, it’ll be your task to help Chook (head drover David Hay) guide hundreds of cattle through some of the most rugged pastures in all of Queensland, riding a motley crew of ex-racehorses.

Don’t go expecting any niceties either – showers come courtesy of the baby wipes you’re advised to bring with you… and the odd muddy dam along the way. At night you’ll bed down in a swag on the red dust with a cowboy snoring like a chainsaw beside you.

“If you want the Hilton, you’re in the wrong place,” Chook flexes his questionable PR muscles again. “But youse are lucky, the dunny’s got a seat this year.” Lucky – in the Chook book, at least – means sitting on a drum (with a seat) above a hole in the ground, inside a three-sided corrugated tin shed; though you should see the view – there’s an entire sky of shooting stars to stare at from your perch at dawn. If you want to witness outback Australia in all its rough-edged glory, you won’t find a better spot than the Harry Redford Cattle Drive.

Now in its 12th year and run entirely by volunteers, the Harry Redford Cattle Drive is how a practical-thinking group of locals figured on keeping their community alive; by giving outsiders like us a reason to visit somewhere we wouldn’t otherwise. Round these parts of west Queensland, towns have a habit of dying off and blowing away on the dry, dusty breeze. The town of Aramac’s not much more than a bakery, a butcher, a fire station and a pub, but it’s what these folk call home, and they love it with a fervour that shows right through to their eyeballs.

I’ve flown into the heart of cowboy country sporting a straw hat that looks part-sombrero, a fancy pair of Country Road suede boots (whose heel will lift clean off within my first half-hour of riding) and pantyhose (well, no-one likes chafing). On arrival I’m whisked away without ceremony to a makeshift bush camp 50 kilometres or so out of Aramac; along a track overrun with inquisitive brolgas and emus, then deposited with my pack onto the bare earth. “Make camp before sun down, don’t take it too far away either or something’ll bite or trample ya in the night,” I’m instructed.

After a welcome shin-dig that every man, woman, child and dog within 160 kilometres of Aramac turns up to, I sleep under a billion, bulging, blinking stars. But the serenity ends all too suddenly when the generator kicks into life at 5am and I’m blinded by a bright arc of light. “Go on, get up,” someone shouts. Across from me, an old cowboy kicks the fire back to life, while a production line of locals in cowboy hats (do they sleep with them on?) appear from the shadows and set to work. Kilos of bacon, eggs, steak, chops and tomatoes sizzle and spit on a huge hot plate set across a drum of hot coals, while a massive pot of billy tea boils slowly.

“I’ve had people on this drive from overseas who’ve seen Uluru, the Barrier Reef, Kakadu… but they reckon they haven’t really seen Australia till they got here,” cattle drive chairman Gary Peoples says to me, somehow channelling my thoughts. Before the surrealism of the occasion can truly hit me, Chook emerges from the shadows. “Eat up, mate,” he orders. “We’ll be doing 18 kays today and there’s no bloody stops for morning tea.”

While the Harry Redford Cattle Drive is a clever tourism initiative, there’s no forgetting the higher purpose to mustering livestock. Rules in this part of the world dictate we must travel at least 10 kilometres a day or the cattle will strip too much grass; and round these parts that’s more important than keeping a bunch of city slickers satisfied.

Over 19 days the cattle drive will cover 200 kilometres, but few visitors complete the entire circuit; instead visitors can choose how far they wish to ride. We’ll be following in the footsteps of brazen outlaw Captain Starlight (aka Harry Redford) who, with just two companions, drove a thousand head of stolen cattle 1400 kilometres across the most inhospitable country in Australia for three months in 1870. His feat of endurance so impressed the jurors at his subsequent trial that they let Harry go.

I’m no Captain Starlight, but I’ve ridden a little over the years, though Chook’s appraisal of trail riders has me questioning whether I should’ve nominated myself as advanced. You don’t have to be an experienced horse rider to come here, but you have to be honest, or you’ll get hurt (they have quieter horses for beginners). We move out 622 head of cattle, each rider finding a position around the herd. I’m clearly out of my league on my mount, Sneeze, who’s shifty and nervous under me; any time I turn his head with my reins he dances on the spot, kicking out his hoofs at anything around him. Eventually, he settles back to an uneven walk.

Around us kangaroos leap about a barren land broken up by flowering gums and riverbeds of brown, muddy water. I step in alongside Chook, watching how he controls an entire herd of cattle, a lifetime of experience going into every movement.

We ride on like this for hours, driving the cattle ever-forward, changing positions alongside the herd; chasing strays and bringing them back to the pack. At noon we stop to eat, finding a log for a seat, gorging ourselves on cakes baked by the old ladies of Aramac who sit by proudly, reveling reluctantly in the praise.

“It’s a community effort, this,” Peoples says to me. “Everyone takes their holiday time off to help. We’re a little town just battling to stay afloat. Everyone here is someone’s mum, or dad, or son, or grand-kid, or niece, or nephew.”

After lunch the ride hits new territory, spindly trees block our way and negotiating a path through becomes an all-absorbing assignment. I’d grown tired of the pedestrian pace this morning, but as the afternoon wears on I find myself consumed by the task at hand, trying to anticipate bottle-necks and obstacles ahead. When three head of cattle leave the formation and Chook yells at me to bring them in, I drop back anxiously.

It’s an untidy procedure; I take a minute more than any real cowboy would’ve and Sneeze dances through a series of ungainly 360-degree spins, but eventually the cattle scramble back into line. “Good work, mate,” Chook lies and I ride just that little bit higher in the saddle.

In the evening, after we corral our horses for the night, I sit on an old plastic chair with a couple of old cowboys saying nothing at all. We sit like this for some time, staring into space, breathing in everything around us. I hit my swag by 8pm, struggling hard to keep my eyes open long enough to watch the shooting star show high above my canvas bed.

Days go on like this, though I never tire of the repetition, instead I find comfort in the routine and my surroundings that change ever so subtly as each day wears itself out. Each ride brings me closer to understanding the cattle that move around me, and the horse underneath me; and I begin to deconstruct every turn I make, trying to make myself more than a mere spectator on the droving team.

And then like that, I’m gone… back to the airport; to a city of concrete and high-rise. I miss the open spaces most of all, and the countless shooting stars, and the sound the horses make at night as they wander about in their corral a hundred metres or so from where I lie in the dark. I even miss Chook and his dying breed of hard-arsed cowboy drovers you won’t find anywhere else on Earth. “It’s hard to get good drovers these days,” Chook told me one day as we rode. “The young blokes all left for the mines. It’s a dying art, droving. One day there’s gonna be none of us bloody left.”

• Fly from Brisbane to Longreach or Barcaldine with QantasLink depending on the day of your arrival – check when you book. You’ll be transferred from either airport by the cattle drive organisers.

• Visitors can ride for a minimum of six days in the drive’s first week, then a minimum of three days in its second and third weeks. It costs $360 per person, per day ($330 for children under 16), which includes all meals and transfers. This year’s Harry Redford Drive, running from 3 May, is already fully booked (though call for cancellations). They are accepting bookings for the next drive in May 2015.

• Tell organisers if you’d like to hire a swag ($20 per day) – there’s a limited number to hire – or bring your own with you.

• It can get below zero at night so bring plenty of warm clothing – opt for layers.

• You don’t need riding experience but be very clear (and honest) when filling out your questionnaire as to your riding ability.

• Helmets aren’t compulsory but are available.

• Alcoholic drinks are not included as part of the day rate, but are very reasonably priced ($4 for beer and wine, $5 for spirits). 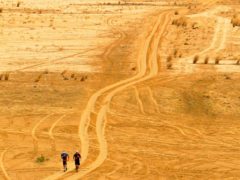 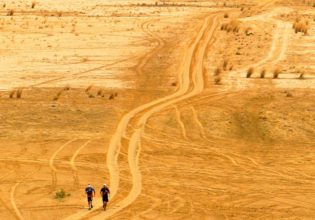 Think a 250-kilometre run through the Simpson Desert sounds mad? So did Cathy Finch – until she did it. Now she reckons you should, too… If you...