Paronella Park - Now and Then 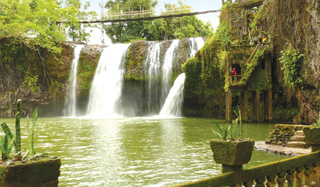 Who says Australia has no history, no culture, no grand buildings?

If you ever hear anything of the kind from a European friend, point them in the direction of Paronella Park, south-west of Innisfail in Tropical North Queensland.

Developed by Spanish immigrant and sugar-cane magnate Jose Paronella in the early 1930s, the five-hectare park features the magnificent ruins of a castle, monumental outdoor staircase, public refreshment rooms, tea gardens, pool and theatre. In its heyday, the theatre was the local movie house. It transformed into a ballroom when the canvas chairs were folded away.

The landscaping includes 7000 tropical plants and trees, including an impressive avenue of kauri pines, which were all part of Jose’s fantasy for creating a large-scale public pleasure garden around his family home.
Jose built north Queensland’s first hydroelectric generator here, too, which harnessed the power of the waterfall at Mena Creek. The hydro plant has recently been refurbished, and since March 2010 has provided all power for the site and adjoining caravan park, including extensive floodlighting for night tours. The excess power generated is fed back to the local grid.

The cement buildings were reinforced with steel from rail yards, which is why much of the property has survived the passage of time (including a blasting from Cyclone Larry in 2006).

Jose’s lasting legacy is now a labour of love for its current owners, Mark and Judy Evans, who purchased the property in 1993 after many years of neglect. The couple are dedicated to conserving Paronella Park and keeping the site open to the public, just as Jose would have wanted.

Where
Paronella Park, 1671 Japoonvale Rd (Old Bruce Hwy), Mena Creek, Qld.
Notes
Entry to the park includes a 45-minute guided tour and a map for personal exploration, and an hour-long night tour. $36 for adults; $33 for pensioners; $18 for children (valid for 12 months). Ticket price includes one free night at the nearby caravan park, or there are three basic timber cabins with queen beds onsite, costing just $75 per night.
Contact
(07) 4065 0000; www.paronellapark.com.au