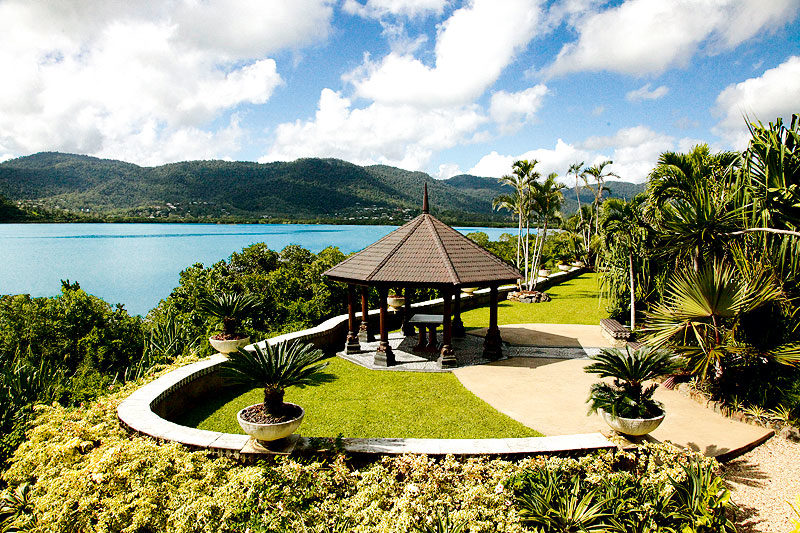 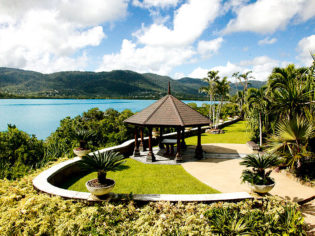 Australia’s most romantic destination is a little-known boutique hotel in the Whitsundays. There’s only one catch, writes Elisabeth Knowles: you have to get married to stay here. Welcome to one of Australia’s most elegant and elite retreats.

With just two king-sized suites available, and then only to a bride and her groom, Whitsunday escapes don’t get more exclusive than Villa Botanica.

Located right on the edge of the Coral Sea, 10 minutes fromAirlieBeach, Villa Botanica is a grand colonial Javanese-style pavilion set amid lushly landscaped grounds, which anchor themselves to a black-rock escarpment above the brilliant blue waters ofPioneerBay.

Its rooms seem destined for optimum romance. Ornate scallop-edged, heart-shaped mirrors hang on the wall above canopied four-poster beds. Wide private decks offer expansive views over an intense Whitsunday-blue sea. A Balinese-style outdoor bathing area beckons with a freestanding stone tub. So it’s interesting to discover that Villa Botanica was originally designed as – and still functions as – a private family home, and that the two self-contained suites were originally made not for newlyweds but to lure two independent adult daughters back to the nest from time to time.

“It was about 18 years ago when we fell in love with this small, ramshackle coastal strip of Airlie Beach, sandwiched between brilliant aquamarine water on one side and deep green mountains on the other,” says owner Ralph Hogan, who with his wife Janet left their ad agency Oddfellows in Sydney to build their dream family home here in 1996. “We found this land by tinny as there was no road access, and when we stepped ashore we knew this is where we wanted to live.”

As well as the usual assorted boxes and pets, a “pantechnicon of cacti” made the move north with them, according to Janet. Villa Botanica is all the more magical for its exotic landscaping: Madagascan triangle palms line the long driveway, eclectically arranged cactus gardens hug the contours of a hill above the house, and a dedicated cactarium showcases a prized collection of rare species grown over the past 50 years by local lady Anne Camilleri, who was becoming too old to care for the plants herself. Ralph started his own collection over three decades ago when he was owner-chef of Cactus Café, a cutting-edge punk-rock eatery in the inner-Sydney suburb of Glebe.

It wasn’t until a photographer friend visited Villa Botanica in 2007 and suggested it would make a great wedding venue that the Hogans even considered the idea, yet it wasn’t long after that that their boutique business began, and it has thrived despite a reportedly declining domestic travel market.

“There are three main reasons the venue is successful,” says Janet. “It is in a truly unique location on the water, we have brilliant staff who are obsessive about service, and because it wasn’t built as a wedding venue but as a wonderful, idiosyncratic private fantasy, it has a very warm, intimate, non-commercial feel.”

The venue is now so popular that weddings are booked 18 months in advance. It’s the perfect lead time for a grand production such as The Best Day Of Your Life, says Janet, who relishes the opportunity to share the journey with someone as their dream day is planned and fulfilled.

“We always feel humbled and honoured to host the most important day in a couple’s life,” says Janet. “Our own wedding was the defining moment in each of our lives so we really believe in marriage – and the more exotic  and romantic the wedding the better.”

In fact, Villa Botanica now casts such a spell that it has begun to seduce young lovers into tying the knot. In November last year, local Airlie Beach couple Marianna Portoles, a surf-shop assistant, and Brendan Ruge, a diesel mechanic, dressed up for a bridal shoot here. Throughout the day, the couple posed as bride and groom in various locations around Villa Botanica.

At the end of the day, while Marianna was still dressed in an over-the-top white meringue gown, the pair took a break under a pagoda with views across the Coral Sea to Hayman Island. Taking advantage of the private moment, Brendan ceremoniously got down on one knee. Given the circumstances and her attire, Marianna thought he was joking. But he wasn’t. Brendan had secretly planned to pop the question in this idyllic spot all along, and while the two had their “wedding photos” taken, he quietly and nervously waited for the shoot to end so he could get down to the real business of the day. Happily, she said yes.

Now Marianna and Brendan are the cover models for the Romantic Issue of Australian Traveller, which you now have in your hands. Who better to show us aroundAustralia’s most romantic destination than the two lovebirds who chose this location to seal their future with a kiss?

Where is it?  Villa Botanica is at Woodwark on the Whitsunday coast,Queensland. You can fly in to Proserpine airport fromBrisbane, or take the more scenic option, which is to fly in toHamiltonIslandand take a ferry transfer past lovely Whitsunday islands toAbelPointMarina,AirlieBeach.

Notes  Villa Botanica specialises in luxury boutique weddings, including everything from flowers to fireworks, with packages ranging from $25,000-$45,000. 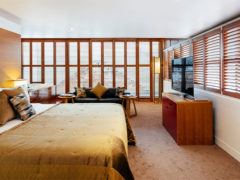 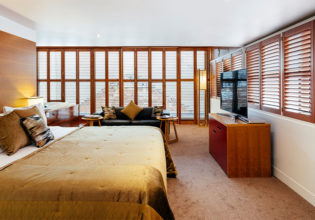 Oversized hotels, cookie-cutter rooms... No thanks. We set out to find bespoke hotels for the plushest of unique stays The Islington, Hobart With en... 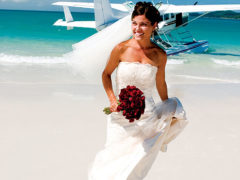 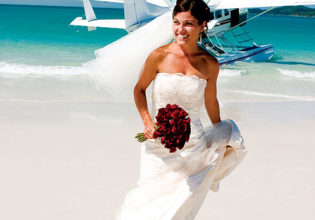 The AT team discover why The Whitsundays is a fantastic wedding location. White sand, bright sun, turquoise sea and the islands of the Great Barrier ...