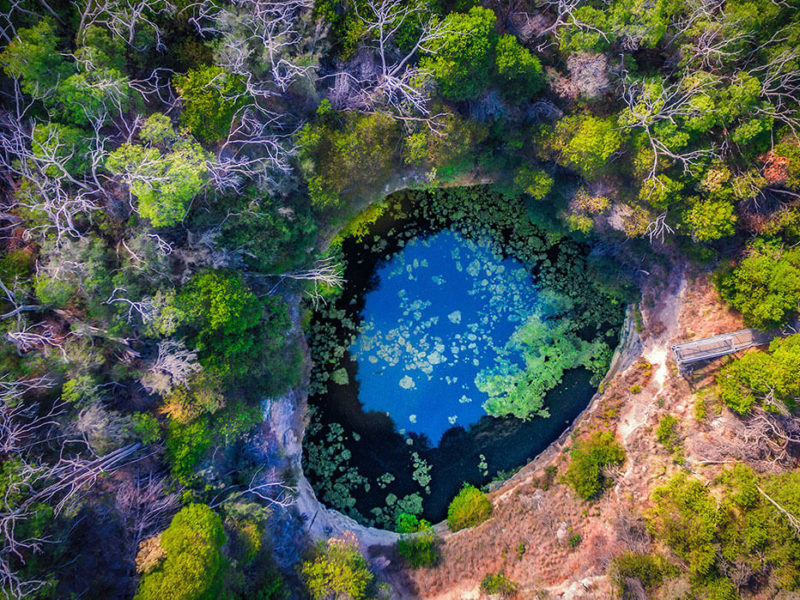 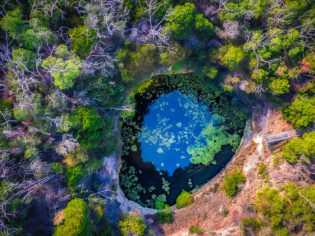 | THIS ARTICLE WAS CREATED IN PARTNERSHIP WITH City of Mount Gambier |

THIS ARTICLE WAS CREATED IN PARTNERSHIP WITH City of Mount Gambier

Escape to an unexpected world of crater lakes, sunken gardens and subaquatic flora in the fascinating natural wonderland that is Mount Gambier.

Uniquely set on the slopes of a dormant ‘maar’ volcano, Mount Gambier’s subterranean network of limestone channels lies just beneath the city streets. It’s here you’ll uncover remnants of a volcanic past where caves, crystal lakes, underground aquifers and cenotes (sinkholes) sit at its heart. Caverns and crevices testify to long-extinct megafauna, and a closer look at the rocks bears evidence of the inland sea complete with embedded fossils, shells and bones.

Known for its crater lakes, including the aptly named Blue Lake, which turns a dazzling cobalt blue in the summer months, Mount Gambier is a worthwhile pilgrimage for nature lovers. History buffs will delight, too, at exploring a geological wonderland of cenotes left by natural forces, shedding light on the region’s fascinating past.

The Little Blue Lake is a mini replica of its larger namesake.

Don’t be fooled by the cenote’s more oft-used moniker, however. In Mount Gambier, ‘sinkholes’ such as Umpherston Sinkhole, Hell’s Hole, Caroline Sinkhole and Kilsby Sinkhole are more than just holes in the ground; they’re actually cenote formations. These plunging gardens and aquatic oases, each with their own distinctive features and plant life, can’t be found anywhere else in Australia.

Explore the underground sanctum that is Kilsby Sinkhole on a snorkel or dive tour.

Kilsby Sinkhole is particularly special. Adventurous travellers prepared to take the plunge can explore this underground sanctum on a snorkel or dive tour, taking in the crystal-clear waters and sunbeams carving through the surface in a perfect cylinder of light. It’s not alone; with more than 50 water-filled cenotes in the area, Mount Gambier has earned its title as the ‘cave-diving capital of Australia’.

Whether you want to see beneath the surface or prefer to take it in from above, there are plenty of ways to experience these fascinating formations. On a guided tour of Engelbrecht Cave, you can see the cave divers as they prepare to weave through the secret tunnels and water-filled passages beneath the city; visit the Cave Garden to look down into the cenote from a viewing platform above; or stroll through the enchanting vines and terraces of the famous sunken garden that is Umpherston Sinkhole.

From flawless photo opportunities, to discovering it all on foot or diving into the depths of the aquifers, Mount Gambier has it all. One thing is certain; once you start exploring, you won’t be able to stop. Venture a little further to take in the astonishing depth of Caroline Sinkhole, watch divers rise to the surface at Hell’s Hole, or cool off with a dip at the Little Blue Lake. No matter how adventurous you are, Mount Gambier will take your breath away. Take your time and enjoy every moment!

Save on a dream trip to Uluru and enjoy 3 nights for the price of 2 from $300 per person twin share.

Save on a dream trip to Uluru and enjoy 3 nights for the price of 2 from $300 per person twin share.

A thriving town set in an ancient landscape of lakes, craters and mysterious underground waterways, Mt Gambier is a playground of natural formations d...